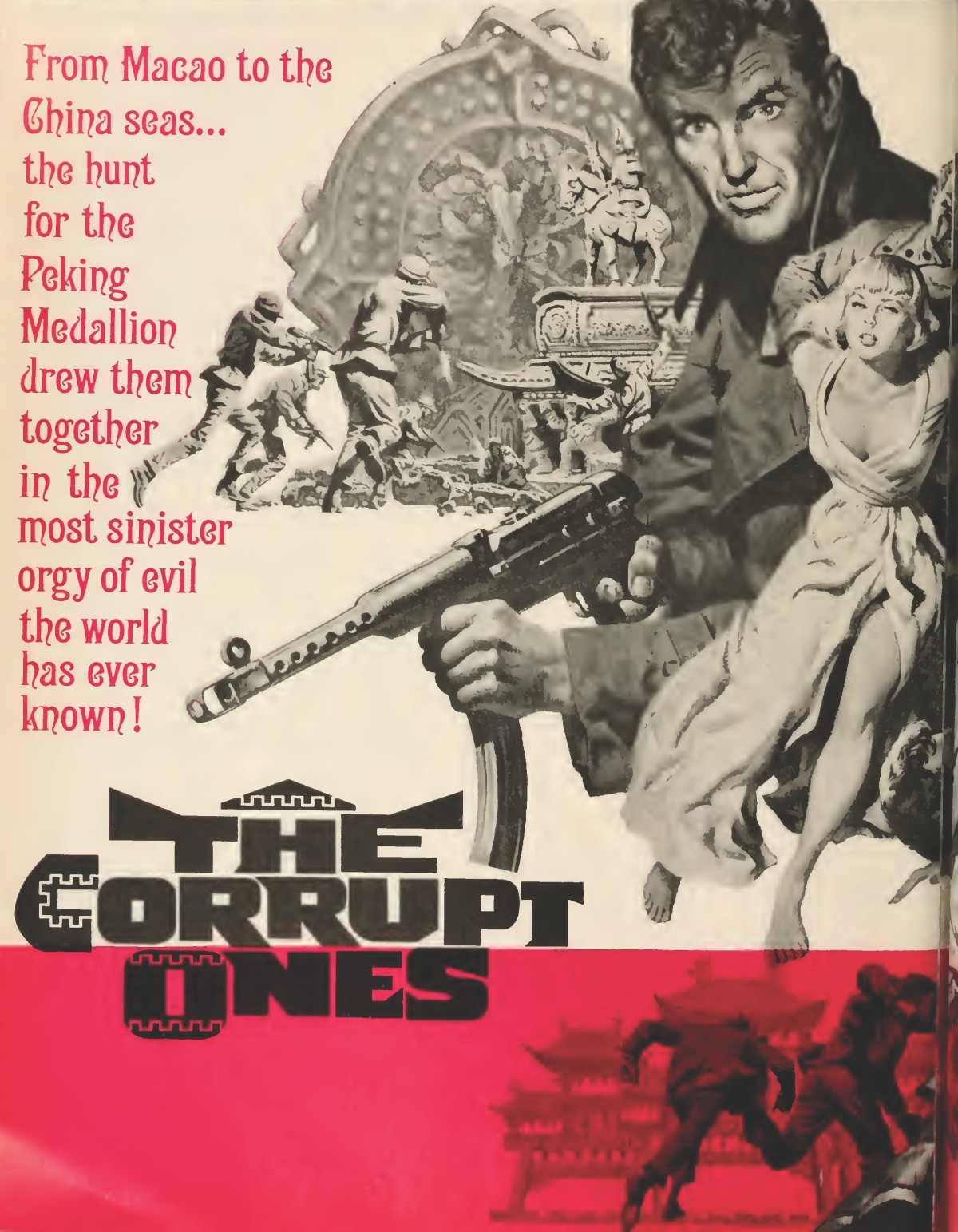 Non-stop action as spy Robert Stack (The Untouchables tv series) battles a variety of crooks in Macao on the Chinese border as they seek the legendary Peking medallion. Stack hails from the James Bond school of espionage, duty bound to kiss every girl he meets. He might wonder at their compliance until he realizes they are only after his knowledge of the missing medallion.

The violence is criminally brutal – punch-ups, gunfights, samurai swordfights, murder, torture by blowtorch and acid and being dragged behind a motorboat. The string of sexy women is matched by handsome men (Christian Marquand and Maurizio Arena in addition to Stack). The thriller pitches helter-skelter through nightclubs, casinos, caves, temples and palatial mansions, the pace only slowing down for, naturally, a scene in a stately rickshaw.

As well as Stack who briefly – and unknowingly – has the medallion in his possession, others in the hunt include Elke Sommer, wife of the man (Arena) who passed it to Stack before being killed. Sommer is on the wrong side of the femme fatale equation. Once Stack is wise to her seductive charms he quips, “Maybe you’re telling the truth but I can’t trust you.”

Also in hot pursuit are gangster Brandon (Marquand) and a Chinese mob headed by Nancy Kwan (The World of Suzie Wong, 1960). That’s on top of a corrupt cop (“I have never feared death only poverty” is his mantra) who doesn’t care who wins the prize as long as he gets his share. Double cross is the order of the day, alliances forged then broken. The action never stops long enough for one of those tension-building scenes of which Alfred Hitchcock or imitators like Stanley Donen (Charade, 1963, and Arabesque, 1966) were so fond.

Stack faces danger with a quip, a kiss or gritted teeth, an old-fashioned tough guy without the James Bond self-awareness. He carries out his manly duties until his brain kicks in and he realizes this isn’t a spy picture after all but a genuine treasure hunt with clues that have to be deciphered. As this causes the movie to sidetrack down another route, it looks like the picture has lost the plot. But then all hell breaks loose and we are back on the safe ground of fistfights, double-crossing and shooting.

The script by Brian Clemens deftly mixes a variety of genres. What might have been a definite change of pace for British director James Hill given his previous effort was Born Free (1966) was anything but since he was responsible for the most recent Sherlock Holmes thriller A Study in Terror (1965).

Fans of improbable storylines, exotic settings, action, interesting bad guys and twists and turns will love this. How can you fail to love a movie with a fight featuring a samurai sword versus a camera tripod?

Many of the films from the 1960s are to be found free of charge on TCM and Sony Movies and the British Talking Pictures as well as mainstream television channels. But if this film is not available through these routes, then here is the link to the DVD and/or streaming service.