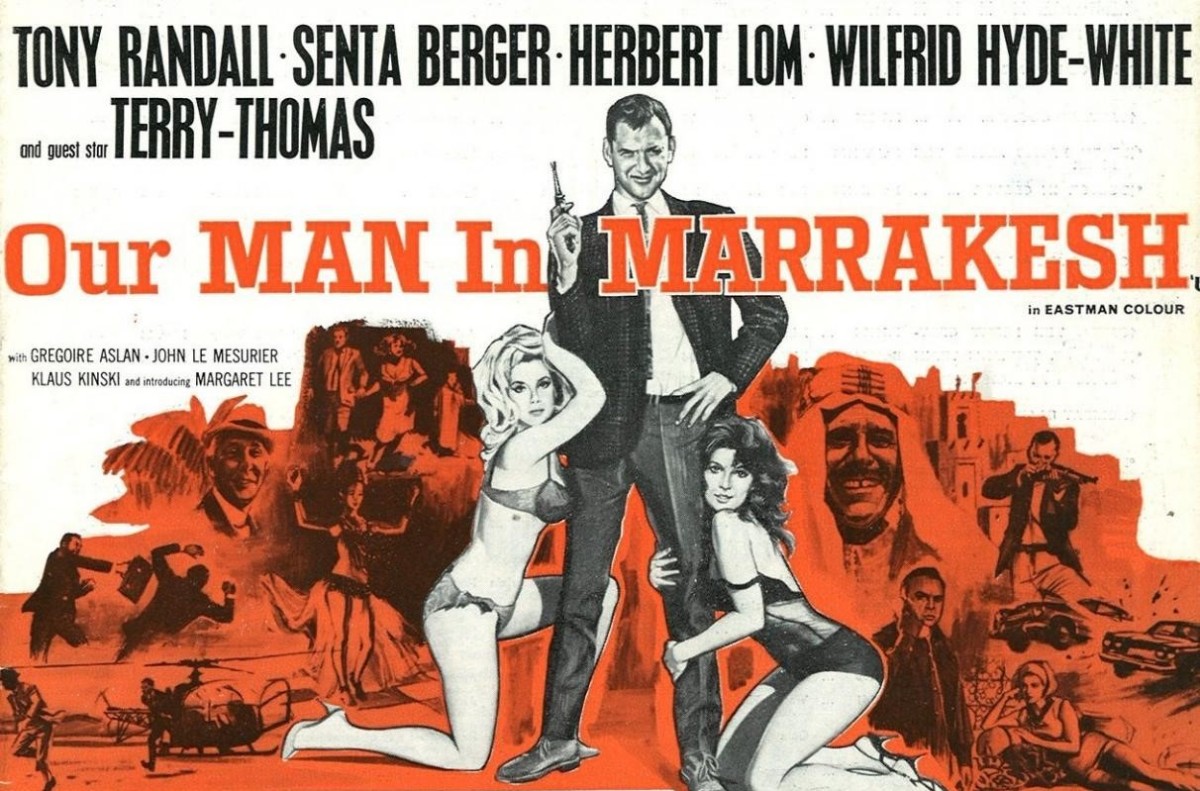 All hail Senta Berger! Another from the Harry Alan Towers (Five Golden Dragons, 1967) portfolio, this is a spy-thriller mash-up with a bagful of mysteries and a clutch of corpses. At last given a decent leading role, and although you wouldn’t guess it from either poster, Senta Berger steals the show from the top-billed Tony Randall (as miscast as Robert Cummings in Five Golden Dragons) and a smorgasbord of European  talent including Herbert Lom (The Frightened City, 1961), Terry-Thomas, Klaus Kinski (Five Golden Dragons), John Le Mesurier and Wilfred Hyde-White (Carry On Nurse, 1959). In this company, the glamorous Margaret Lee (Five Golden Dragons), as Lom’s cynical lover (“you are never wrong, cherie, you told me so yourself,” she tells him) is an amuse-bouche.

Six travellers – including oilman Randall, travel agent Le Mesurier, salesman Hyde-White and tourist Berger, meeting her fiancé – board a bus from Casablanca airport to Marrakesh. One is carrying $2 million as a bribe to ease through a vote in the United Nations, but bad guy Lom doesn’t know which one it is. When Berger’s fiance’s corpse tumbles out of Randall’s cupboard, the pair become entangled. Berger is a marvellous femme fatale, trumping Randall at every turn.

With no shortage of complications, the tale zips along, directed on occasion with considerable verve by Don Sharp (The Devil-Ship Pirates, 1964). There are some inventive double-plays – with a body in the boot Berger and Randall are stopped by a cop who tells them their boot is open. An excellent rooftop chase is matched by a car chase. And there’s a terrific shootout. Kinski is at his sinister best and Terry-Thomas a standout in an unusual role as a Berber.

The film was shot on location including the city’s souks, the ruined El Badi Palace and La Mamounia hotel (featured in The Man Who Knew Too Much, 1956). But Berger seamlessly holds the whole box of tricks together, at once glamorous and sinuous, practical and tough and exuding sympathy, and it’s a joy to see her for a large part of the picture leading Randall by the nose. Quite why this did not lead to bigger Hollywood roles than The Ambushers (1967) remains a mystery.