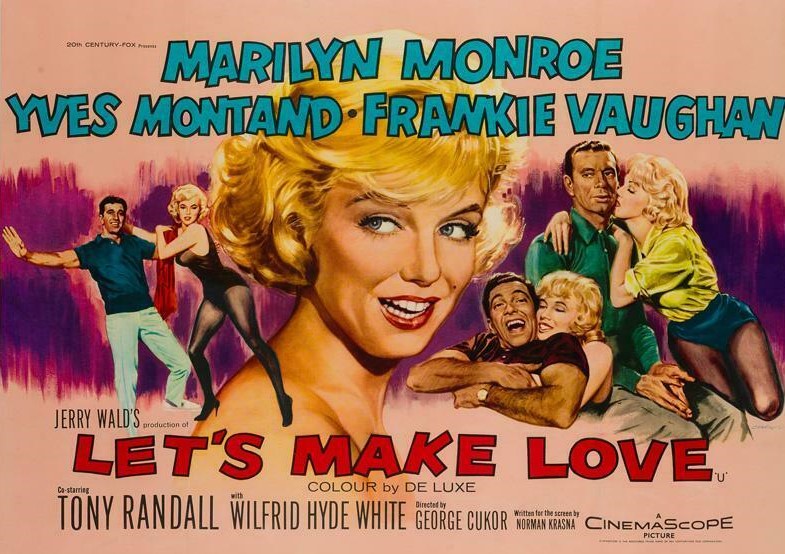 Despite a luminous performance by Marilyn Monroe (Some Like it Hot, 1959) , in revealing outfits half the time, this backstage musical drama barely staggers over the line. Whatever relationship the actress enjoyed off-screen with co-star Frenchman Yves Montand (Grand Prix, 1966) fails to register here. In this fish-out-of-water tale of the Broadway intrigue involved in putting a musical together, watching klutz billionaire Jean-Marc Clement (Montand) getting his act together as neophyte actor-cum-singer fails to fly.

It’s always difficult observing a good actor trying to be bad. If he’s a really good actor, it’s going to be an awful watch. And unless he’s got the comedic chops to trigger a bucketload of laughs it’s painful to observe. Gregory Peck reportedly quit this role in favour of The Guns of Navarone (1961) because there was too much Marilyn Monroe in it, and possibly an awkward Peck would have been more fun to watch though comedy was scarcely his forte, but without Monroe the movie would have been virtually unwatchable.

The story’s familiar, a twist on Cinderella with Clement being the ugly duckling in terms of talent. The billionaire businessman, notorious for his love life, attends a rehearsal of a show intending to register outrage at its veiled portrayal of him. Instead, he is mistaken for an auditioning actor and offered a role. He falls for Amanda (Monroe) but she shows little interest, either obsessed with her knitting or trying to improve her education at night class, and appears far more interested in her stage co-star Tony (Frankie Vaughan).

In order to sharpen up his act, Clement hires a bunch of well-known thespians: Milton Berle, Bing Crosby and Gene Kelly.

This is where the show could be get interesting. Genuinely learning the secrets of a great comedian, singer and dancer should at the very least provide a fascinating insight into their skills. Of these, Crosby is the pick, demonstrating the importance of raising or dropping your voice at various points in order to maximize the emotion in a song, in other words a singing masterclass. Berle has too much screen time and does little to justify it.

Whatever, regardless of what the script says, Clement seems to take on board little of what he is taught. Montand was a gifted crooner in any case, having begun his career as Edith Piaf’s protégé, and it just seems like he switched instantly from being a bad singer to a good one. In contrast, when Amanda has to take direction, she immediately shows how simple it is to improve a number by adding some actions.

Luckily, Monroe is such a mesmeric screen quality that she can rescue any indifferent movie.  This would work better with a more charismatic leading man – and the prospect of Peck teaming with Monroe was intriguing – but regardless of who she acts opposite Monroe will always blow them away. This is a different kind of role for her because in a sense she is neither the girl adored nor the victim of romance gone wrong. For the most part she’s just a career girl focusing all her attention on getting on. She’s almost just the foil in the dramatic sequences for Montand. But once she has the stage or screen or to herself she dazzles.