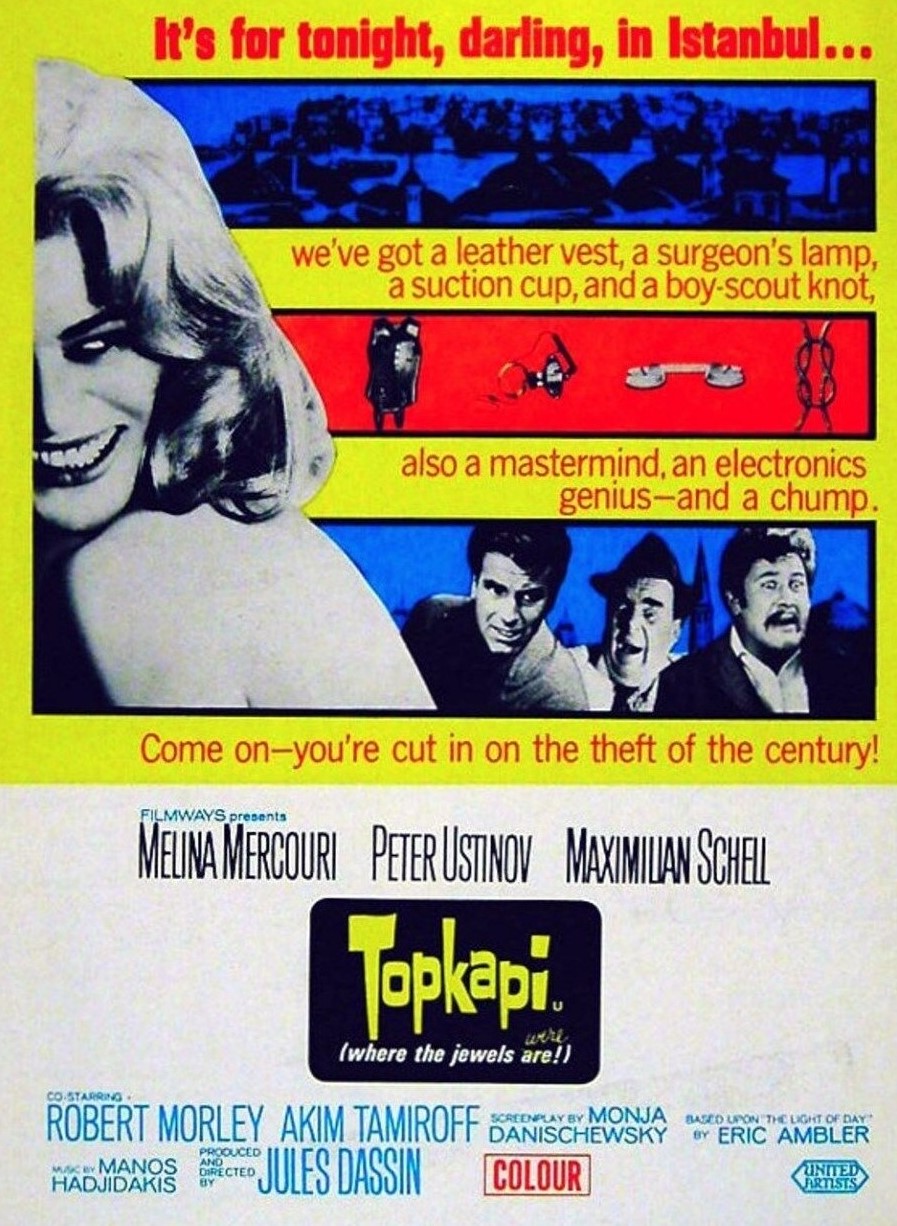 Films as diverse as The Italian Job (1969), Mission Impossible (1996) and Ocean’s Eleven (2001) owe director Jules Dassin a massive debt since he pretty much invented this genre with the French-made Rififi (1955). But that involved professional criminals. Outside of masterminds Elizabeth (Melina Mercouri) and Walter (Maximilian Schell), this crew are amateurs, deliberately chosen for their lack of criminal records and with a mind to the specific tasks required. So we have acrobat Giulio (Gilles Segal), upper-class English gadget inventor Cedric (Robert Morley), strongman Hans (Jess Fisher) and driver Arthur (Peter Ustinov).

The target is the impenetrable, complete with sound-sensitive floor, Topkapi Palace in Istanbul where they plan to steal a priceless emerald-encrusted dagger. The plan is ingenious. Arthur is initially only hired to smuggle the weapons essential to the audacious heist across the border. But when he is caught and forced to cooperate with the Turkish secret police, he is enlisted as a replacement for Hans. Minus the rifles and grenades which at first appeared indispensable to the plan, the thieves come up with an even more inspired alternative involving among other things scampering across rooftops, abseiling, a parrot and slowing down the revolutions of a lighthouse.

Originally intending to betray his colleagues as soon as possible, Arthur falls under the seductive spell of Elizabeth and finds himself recruited as the replacement muscles. Elizabeth exudes such sexuality she has the entire gang in her thrall and makes the cowardly, weak, acrophobic Arthur believe he can overcome all his fears. Like current television sensation Money Heist, Walter engages in a cat-and-mouse game with the police, always one step ahead, with a bagful of red herrings at his disposal, eventually giving the pursuers the slip during a wresting competition held in a massive outdoor arena.

Interestingly, too, this doesn’t have the trope of gangsters at each other’s throats, planning to double-cross one another or bearing old grudges. Nor is this the last robbery for anyone prior to retirement. Equally, nobody challenges the leader. In fact, the entire crew could not be more docile, content to sit at the feet of Elizabeth and Walter, lapping up the former’s flirtation, wondering at the latter’s skill, as if they are all honored to have been chosen.

The climactic heist, carried out minus music, and lasting over 30 minutes is absolutely superb, setting a very high bar for future imitators, and there is a twist ending. Dassin mixes light comedy and high tension with the sultry attractions of Elizabeth to produce an at times breathtaking picture. As well as the heist itself, the wrestling sequence is stunning and the transition of Arthur forms the acting highlight (he won the Best Supporting Actor Oscar).

But all four main stars are superb. Audiences accustomed to a more uptight Maximilian Schell (The Condemned of Altona (1962) will have been surprised by his charming performance. Melina Mercouri (Oscar-nominated for Never on Sunday, 1960) is the archetypal blonde bombshell, liberal with her favours but careful not to favour just one. Although Walter devises the plan, she is actually the criminal supremo, selecting the targets, and then delegating to ensure the tasks are carried out. Robert Morley is having the time of his life. Akim Tamiroff (Lord Jim, 1965) has a cameo as a chef.

A film noir star after Brute Force (1947) and The Naked City (1948) Dassin’s Hollywood career collapsed in the wake of the anti-Communist McCarthy hearings and he was blacklisted. Rififi opened few doors but even the success of Never on Sunday (1960) brought negligible offers. Despite returning to the mainstream with such elan through the conduit of Topkapi, albeit with a European cast, he remained on the Hollywood periphery and although the American-set Uptight (1968) – previously reviewed in the Blog – involved another heist that was primarily the wrapping for social documentary.

More at home with comedies screenwriter Monja Danischewsky (The Battle of the Sexes, 1960) draws out more humour than the source material, Light of Day by noted thriller writer Eric Ambler, would ostensibly suggest.

A delight from start to finish, the crème de la crème of the heist genre, this is unmissable. Dassin can lay claim to being the John Ford of the crime picture.