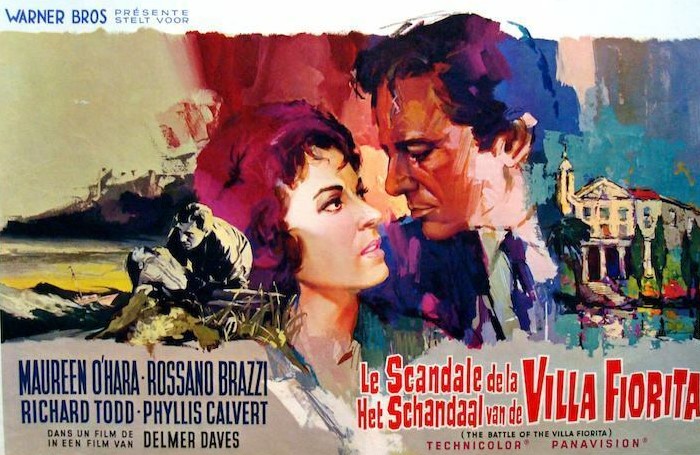 One of the few romantic dramas of the 1960s to resonate today. Neglected wife Moira (Maureen O’Hara) abandons her two children to fly to the eponymous villa on Lake Garda in Italy to take up with composer Lorenzo (Rossano Brazzi).  While husband Darrell (Richard Todd) accepts the fait accompli, kids Michael (Martin Stephens) and Debby (Elizabeth Dear) set out to bring her back. Although Disney had created a hit on a similar theme with The Parent Trap (1961) – also starring O’Hara – The Battle of the Villa Fiorita failed to find an audience at the time primarily because it sailed too close to comfort regarding the reality of the effect of separation and impending divorce on children.

Nor are these kids Disney cute. While Debby occasionally calls upon her internal winsome to tug at heartstrings, both she and Michael are made of sterner stuff. Unwilling to use comedy as a means of bringing the errant adults to heel, the movie gets deeper and deeper into darker territory, as the kids embark on a war of attrition, disrupting the cushy love-nest and forcing their mother to accept her maternal responsibilities. And the ending is far from what you would term happy.

Moira injects some nascent feminism into her role, determining that she is entitled to happiness rather than merely fulfilling the part of a good mother, running a household,  looking after her offspring and enjoying the life of a well-to-do matron married by a husband too often away on business and the too-familiar company of boring respectable friends. A Disney picture would have seen the kids relying on the kindness of strangers or harmless subterfuge to make the trip from Britain by boat and train to Italy. Here, they fund the journey by selling Debby’s horse. The trek is not only dull but on their miserable budget they spend most of the time famished, unable to afford food on the train, resigned to watching adults in their compartment stuff their faces (Disney would have had the grown-ups share  out the tasty fare).

Arriving at the palatial villa, where Moira is waited on hand and foot, spoiled by presents and ardently wooed, the children are under no illusion about the uphill battle they face especially when Moira is not immediately stricken enough by conscience to give in to their entreaties. Lorenzo’s initial solution is to fly the children home. Adult fortitude begins to waver when the English pair join forces with Lorenzo’s estranged daughter Donna (Olivia Hussey) on a hunger strike. Lorenzo shows a sharper side to his temperament, Moira a weaker. The children’s solidarity is also, however, sorely tested by their own differences.

That there is no easy solution – the kids perhaps joining their mother full-time in Italy or some kind of child-sharing scheme – is what gives this movie its power. The classical idea of a repressed woman finding redemption in the arms of an Italian lover (as with Summertime, 1955, also starring Brazzi) is turned on its head as reality intervenes. It’s as well the kids don’t kill us with cuteness, but instead present a realistic example of what it’s like for adoring children to be abandoned. As the film progresses, and the children turn the screw, they soon face adult realization that, even if they win, the mother they will bring back will not be the mother they knew.

After turns with James Stewart (Mr Hobbs Takes a Vacation, 1962) and John Wayne (McLintock!, 1963), Maureen O’Hara had regained her marquee appeal, and although feisty enough in those outings, this was a different, and more courageous,  performance than her fans might have expected. Her conflict is mostly internalized and especially when her children fail to see her point of view, that feistiness vanishes from sight replaced by a more somber, thoughtful individual. Brazzi is excellent as the lover whose paternal responsibilities he takes lightly compromised by a woman forced to come to terms with motherhood. Martin Stephens (The Innocents, 1961), Elizabeth Dear (The Pumpkin Eater, 1964) and, making her debut, Olivia Hussey (Romeo and Juliet, 1968) make convincing, conniving, children still dealing with their own hormonal and emotional growth.

Adapting the bestseller by Rumer Godden (Black Narcissus, 1947), this proved to be the final movie for veteran director Delmer Daves (3:10 to Yuma, 1957).