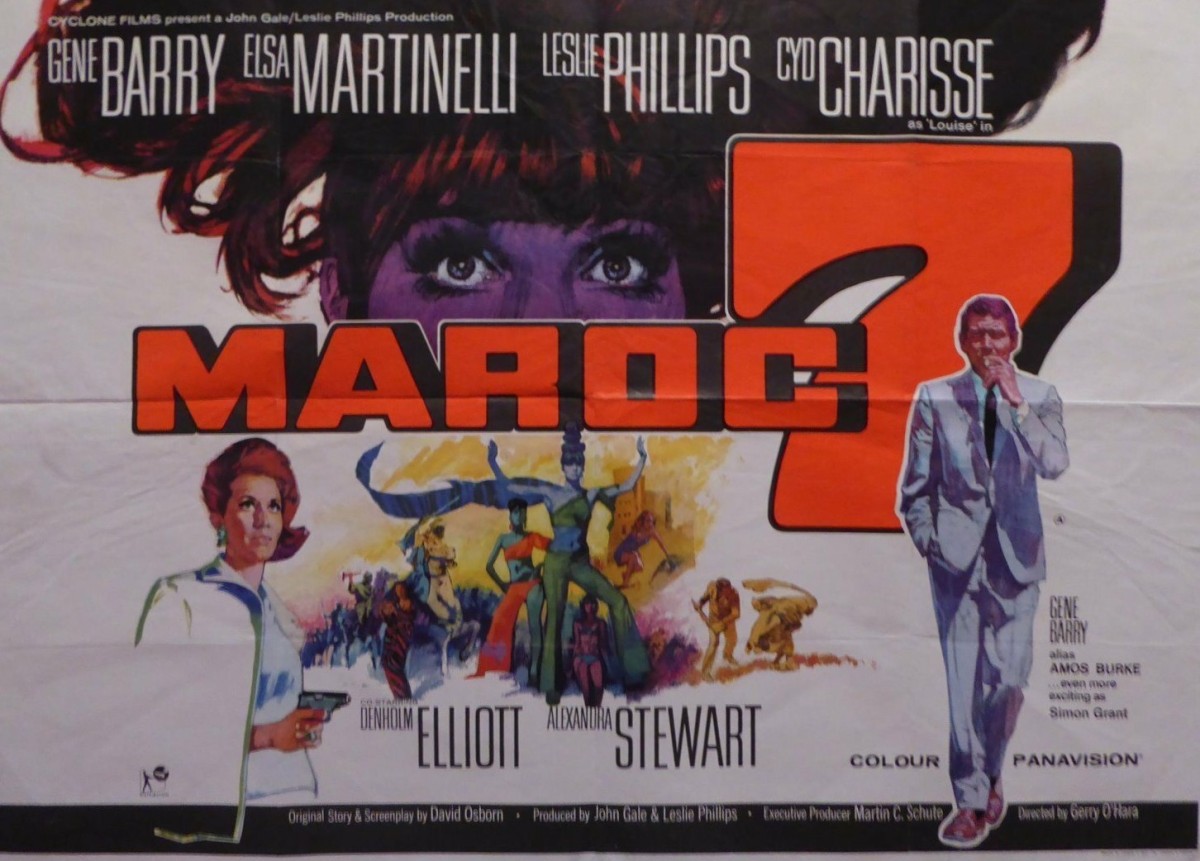 With a string of Swinging Sixties fashion models providing the requisite bevy of beauties, a gang of thieves, a Moroccan heist, superb locations, great cast and a touch of archaeology with secret chambers and a long-lost relic thrown in, this splendid espionage frolic proves a welcome return to big screen top billing for Gene Barry after nearly a decade in television in Bat Masterson (1958-1961) and  Burke’s Law (1963-1966).

Something of a cat burglar himself, Simon Grant (Barry) infiltrates a gang which uses fashion as a cover and whose ingenious speciality is to steal famous heirlooms and replace them with fake ones in the assumption that on their departure from a foreign country the customs officers will not be able to tell the difference. Louise Henderson (Cyd Charisse) and Raymond Lowe (Leslie Phillips) head up the gang while Claudia (Else Martinelli) may or may not be in on the act.

Her dalliance with Simon suggests an inclination towards the right side of the law but the fact that she has been involved with the pair for so long sets up the intriguing notion that she is stringing the American agent along. Initially, she rejects Simon’s advances until told by Louise to comply and pump him for information leading to one of the movie’s best lines (and innuendo that a British audience in particular would adore). Says Simon: “We haven’t done much about pumping but maybe that will come later.”  Doubts also surround the intentions of Michelle Craig (Alexandra Stewart).  On their trail is Inspector Barrada (Denholm Elliott).

There is mystery aplenty and a fair quotient of punch-ups, romance, shoot-outs and murder while the unearthing of the hidden treasure is less heist amd more straightforward Indiana Jones. The fashion is the icing on the cake. The Moroccan fashion shoots are more than merely decorative, or an excuse to bare the charms of the gorgeous models. Instead, the shoots would not disgrace Vogue or any of the other glossy magazine temples to haute couture, with that Sixties focus on fabulous clothes, genuine location and outlandish hairstyles.

On top of that, several of the stars are either playing against type or out of their comfort zones. Legendary Hollywood dancer Cyd Charisse famed for such classic musicals as The Bandwagon (1953) and Silk Stockings (1957) sets such fluff aside to essay a criminal mastermind, whose cunning often gets the better of Simon. Leslie Phillips (Crooks Anonymous, 1962), better known as a charming Englishman with an eye for the ladies, is as ruthless a photographer as he is a criminal. Director Gerry O’Hara (The Pleasure Girls, 1965) has managed to get both Phillips and Denholm Elliott to drop their standard methods of delivery, usually embracing a drawl, making their characterisations a good bit more fresh than normal. Phillips was clearly intending to make some kind of career change since he was the producer.

Gene Barry makes a perfect entrance as an adventurer-spy, as confident in his seduction techniques without women falling at his feet like James Bond, with a nice line in self-deprecation and more than able to look after himself. Before being side-tracked by television, Barry had shown movie star potential in War of the Worlds (1953) and Thunder Road (1958) and now he delivers on that earlier promise. Elsa Martinelli (Hatari!, 1962) is the femme fatale who may or may not wish to play that role, keeping the audience completely on edge as to which side of the law she is likely to come down on. Added bonuses are Alexandra Stewart (Only When I Larf, 1968), Angela Douglas (Carry On Screaming!, 1966), Tracy Reed (Hammerhead, 1968), dancer Lionel Blair (A Hard Day’s Night, 1964) and Maggie London.