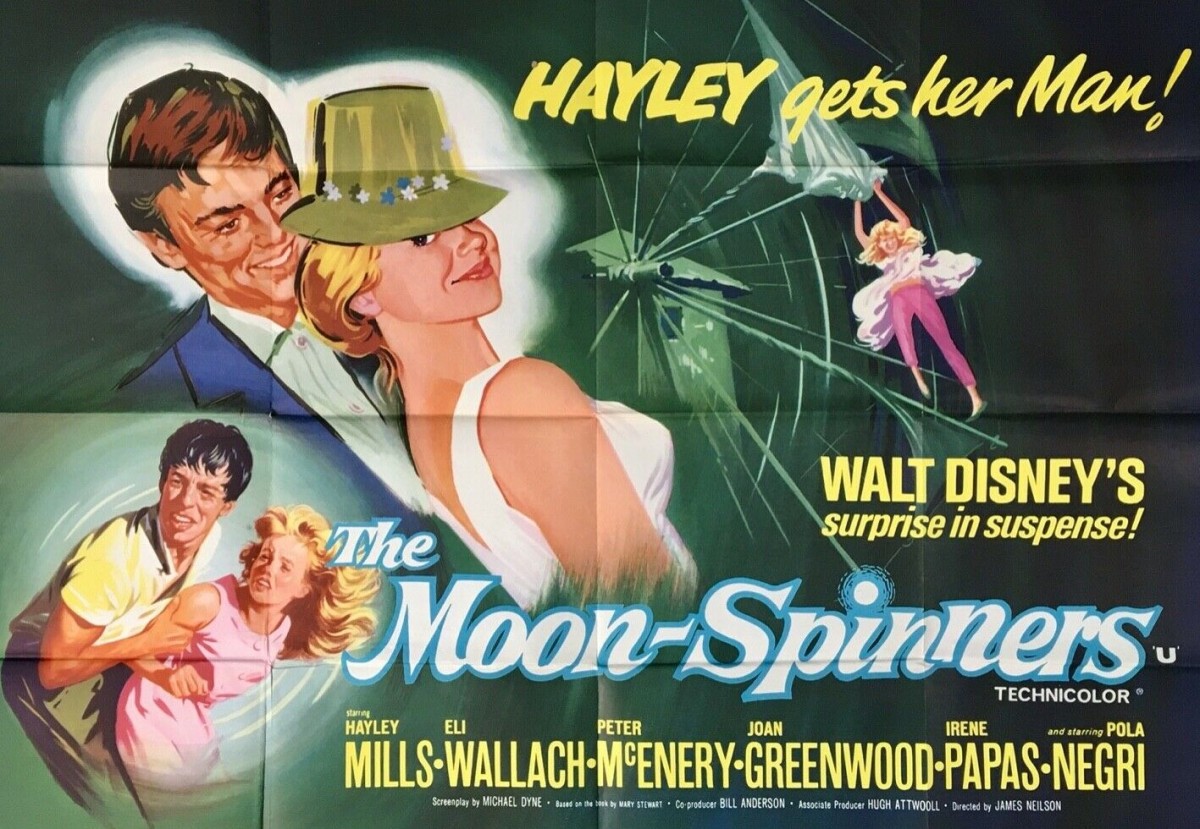 Every new Hayley Mills film was an exercise in transition. Would audiences allow the successful child star – the first for a generation – to grow up? Or would they turn against her as they had Shirley Temple? And would her paymasters Disney in the penultimate film in her contract assist her by offering more mature roles or insist she remained the cute kid? She had already ventured into more adult territory with the British-made The Chalk Garden (1964).

Set on the island of Crete, what starts out as typical Disney travelog – traditional Greek wedding and annual festival parade – soon morphs into darker sub-Hitchcockian territory. Nikki (Hayley Mills) on holiday with her aunt (Joan Greenwood), a collector of folk songs, becomes mixed up with skin diver Mark (Peter McEnery) who appears for reasons unknown to be on the trail of a local man Stratos (Eli Wallach). Young love looks set to blossom except for the villainy afoot. The picture holds on to its various mysteries for too long so exposition comes in a flood in the second act while the third act introduces a new set of characters including British consul (John Le Mesurier) and wealthy yacht owner Madame Habib (legendary silent star Pola Negri).

Along the way some excellent scenes feature: a nerve-tingling high-wire stunt on a revolving windmill, a punch-up on a speeding boat, the drunken wife (Sheila Hancock) of the consul, feral cats in an ancient monument, an old woman thinking she is going crazy when a bottle moves seemingly of its own volition, a hearse doubling as an ambulance, a cowardly leopard and a belter of a slap meted out by Nikki. Mark, physically inhibited by a gunshot wound, has to cede investigation into the nefarious activities to Nikki who in any case has already played the independence card.

Getting all the necessary information to the audience and ensuring various characters are properly introduced without the whole enterprise turning into a turgid mess is a tricky proposition but director James Neilson is equally at home with complicated plot and multi-character scenario from his experience on Dr Syn, Alias the Scarecrow (1963) and with Mills from Summer Magic (1963). And he lets mystery and action take precedence over budding romance, the kiss when it comes hardly going to make an audience swoon, and uses the traditional Greek elements to build up atmosphere.

All in all entertaining enough, especially if viewed as Saturday matinee material, but it’s clear that the leading roles would have worked better if played by older characters as was the case with the source novel by Mary Stewart. Hayley Mills (Pollyanna, 1960) makes a game stab at putting forward a more grown-up persona but relies far too much on the acting tricks that got her into the child-star business in the first place. Even so, once she exerts her independence, she becomes more believable although the idea of a teenager solving a crime creates more problems than it solves in attracting an adult audience.

In his first leading role Peter McEnery (Beat Girl, 1960) impresses. Villainy is a stock in trade for Eli Wallach (The Magnificent Seven, 1960) but here he dials down the brutality. Irene Papas (The Guns of Navarone, 1961) plays his sister and were it not for her husky voice Joan Greenwood  (Tom Jones) would have been a dead ringer for a dotty aunt. It’s a treat to see a famed silent star Pola Negri (Shadows of Paris, 1924) putting in an appearance. Character actors John Le Mesurier (The Liquidator, 1965), Andre Morrell (The Vengeance of She, 1968) and Sheila Hancock (Night Must Fall, 1964) complete the British contingent.   For British television writer Michael Dyne this proved his sole screenplay.