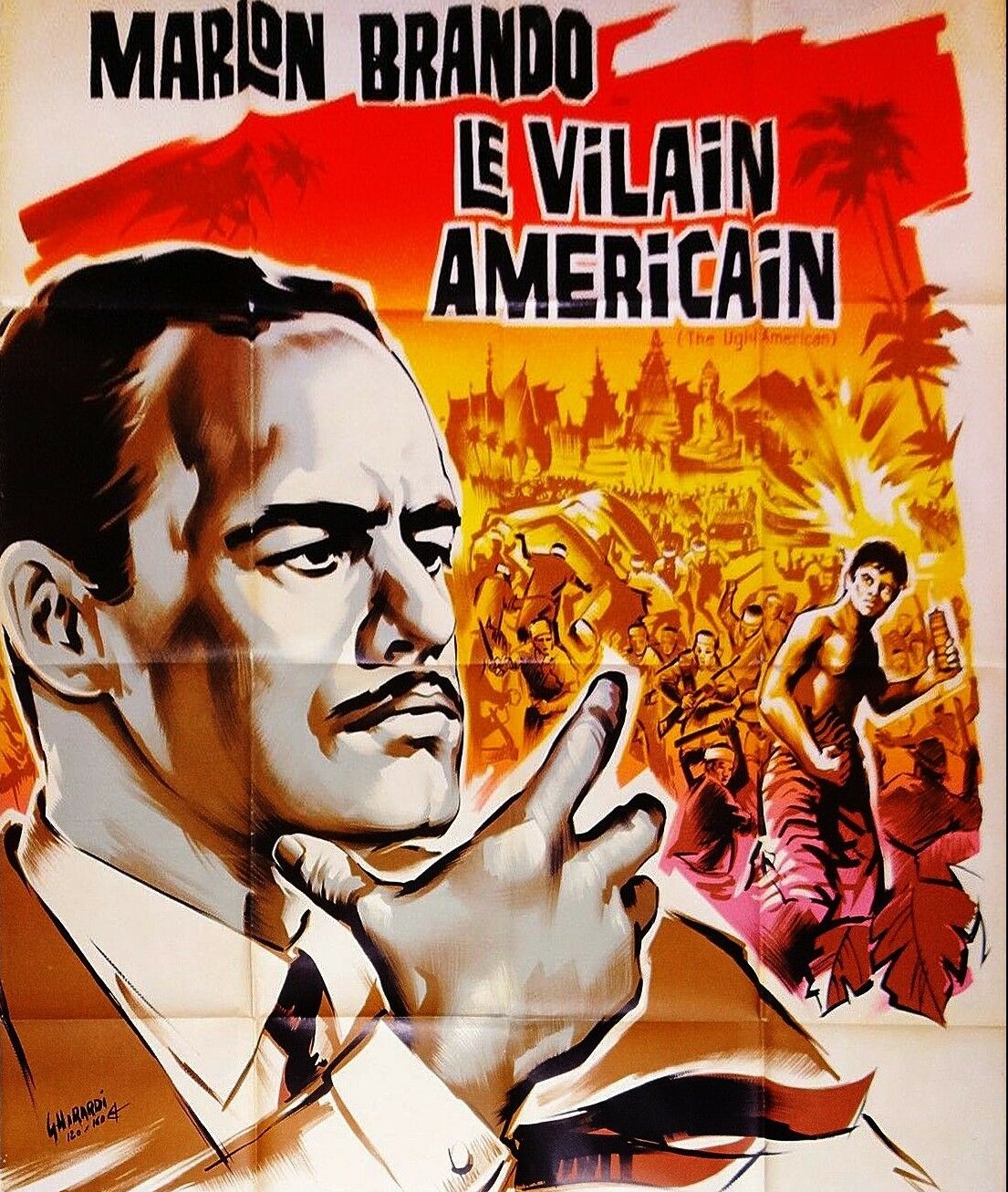 Terrific performance from Marlon Brando saves this prescient but preachy meditation on Vietnam. Harrison MacWhite (Marlon Brando) is the new ambassador, whose political credentials are questioned by many,  parachuted into the fictional South-East Asia country of Sarkhan, knee-deep in civil war, communist north versus westernized south. The battleground is the American construction of a “Freedom Road” north to China which dissenters fear will be a conduit for the military. MacWhite owes his appointment to his friendship with Deong (Eeji Okada), a charismatic leader.

On arrival, the ambassadorial car is engulfed in a riot, car rocked, windscreens smashed. MacWhite shakes up a complacent embassy and though articulate and scholarly believes he holds the solution to the tricky situation while unwilling to accept that national self-determination does not necessarily mean complete hatred of the Americans. There is duplicity on both sides, rebels blaming U.S. truck drivers for deaths they caused, the Americans so used to getting their way they don’t stop to think if it is the right way.

Anxious not to be seen as a lapdog for Communism, MacWhite’s actions inflame the situation, while Deong falls victim to internal forces. Construction boss Homer Atkins (Pat Hingle) promotes the clever use of building hospitals along the road, thus encouraging locals to back it, but nobody falls for such honest skull-duggery masquerading as well-meaning intent.

Friends turning into enemies is a decent premise for any movie but this is over-burdened with debate that while interesting and providing a reflection of the times is basically a mixture of virtue-signalling and apportioning blame and, most heinous of failings, doesn’t really advance the story.

First-time director George Englund handles the action sequences well and captures the essence of a country about to explode against a background of growing tension and political machination. Use of Thailand as a location added authenticity.

The movie was based on a controversial novel by political scientist Eugene Burdick (who also wrote a more straightforward cold War thriller Fail Safe) and William Lederer, navy veteran and CIA officer, so it carried the stamp of authority in terms of putting forth the arguments for both sides. However, while the film bore only a “passing resemblance” to the book, according to co-author Burdick, he deemed it a superior achievement on the basis of its more dramatic treatment. Stewart Stern (Rebel Without a Cause, 1955) was the screenwriter who received blame and praise in equal measure.

Marlon Brando (Bedtime Story, 1964) exudes authority, broad shoulders packed into a suit, and brilliantly captures the anguish of a man led into disaster by arrogance. Coming off back-to-back flops One-Eyed Jacks (1961) and Mutiny on the Bounty (1962), this was a considerable change of pace for the actor, the first of several excursions into political territory. Eeji Okada (Hiroshima, Mon Amour, 1958) proves a worth opponent. Pat Hingle (Sol Madrid, 1968), Arthur Hill (Moment to Moment, 1965) and Jocelyn Brando (The Chase, 1966) provide sterling support.

The movie did not just predict what would happen if the U.S. lost the battle for hearts and minds but a similar situation confronting the U.S. Ambassador to Indonesia in 1965 whose appointment was unwelcome in that country.

You can catch this on Amazon Prime.