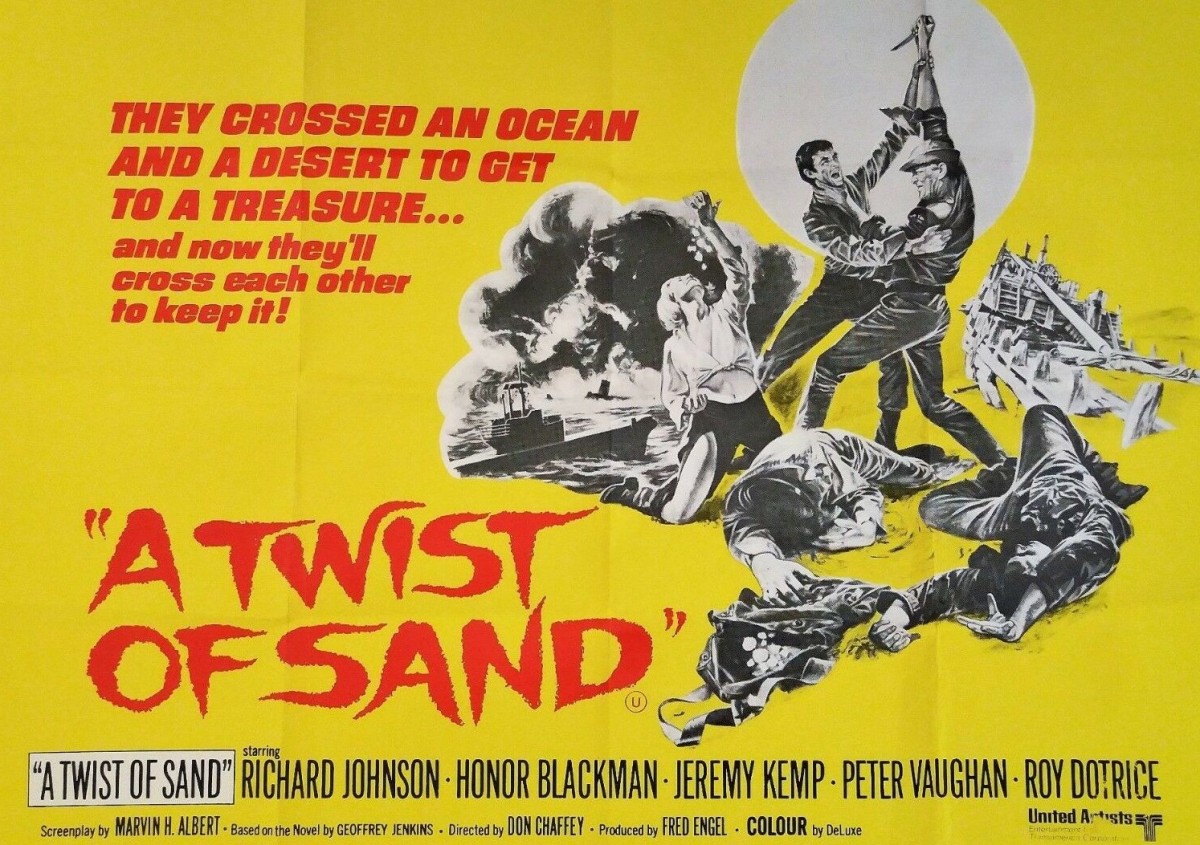 Initially promising, ultimately disappointing thriller that proves you should not go to sea  without a big budget. Because he is the only skipper to have successfully negotiated the Skeleton Coast off Namibia in South Africa, smuggler Geoffrey Peace (Richard Johnson) gets roped into a scheme by Harry Riker (Jeremy Kemp) and Julie Chambois (Honor Blackman) to collect stolen diamonds.

Peace knows his way around this area thanks to World War Two submarine exploits and that particular expedition is recalled in flashback while its repercussions form part of a plot. Also on board the boat are the goggle-eyed knife-wielding Johann (Peter Vaughn) and Peace’s shipmate David (Roy Dotrice).

Peace has to navigate the treacherous waters of the Skeleton Coast before the team embark on a trek through the desert to find the diamonds, hidden in the unlikely location of a shipwreck, itself in imminent danger of being buried in an avalanche of sand that could be triggered by (shades of Dune) sudden movement or sound.

On paper – and it has been adapted from the bestseller by Geoffrey Jenkins – it has all the ingredients of a top-class thriller but it doesn’t quite gel. For a start, the flashback, where Peace has to hunt down a new class of German submarine and not only sink it but make sure there are no survivors, gets in the way of the action.

The sexual tension you might expect to simmer between Peace and Julie does not appear to exist, the bulk of the threat coming from the villainous-looking pair, Riker and Johann, the former already known to be untrustworthy, the latter too fond of producing a knife at odd occasions. The trek into the desert takes way too long and rather than increase tensions slackens it off and there is no real explanation as to why the ship was lost so far into the desert without entering Clive Cussler archaeological territory.

Extracting the diamonds is certainly a taut scene, with the sand dunes threatening to collapse any moment but the climax you saw coming a long way off and although there is an ironic twist it is not enough to save the picture.

On the plus side, Richard Johnson (Deadlier Than The Male, 1967) shucks off the suave gentleman-spy persona of Bulldog Drummond to emerge as a snarly, believable smuggler. But Honor Blackman (Moment to Moment, 1966) is wasted and this is one of the least effective bad guy portraits from the Jeremy Kemp (The Blue Max, 1966) catalogue. Roy Dotrice (The Heroes of Telemark, 1965) is better value while Peter Vaughn (Hammerhead, 1968), menacing enough just standing still, overplays the villain.

Set up as a thriller very much in the Alistair MacLean vein, this shows just how good MacLean’s material was, how great a command he had of structure and not just of action but twists along the way. A Twist of Sand wobbles once too often in its structure and never quite manages to build up the necessary tension between characters. Although the Skeleton Coast sea-scene falls apart due to defective special effects, the other two sequences at sea are well done, the opening section where Peace is being chased by Royal Navy vessels, and the underwater attack on the German submarine where murky water manages to obscure the effects sufficiently they appear effective enough.

Don Chaffey (The Viking Queen, 1967) does his best with material that’s not quite up to standard. Marvin H. Albert (Tony Rome, 1967) doesn’t do as good a job of adapting other people’s work as he does his own.