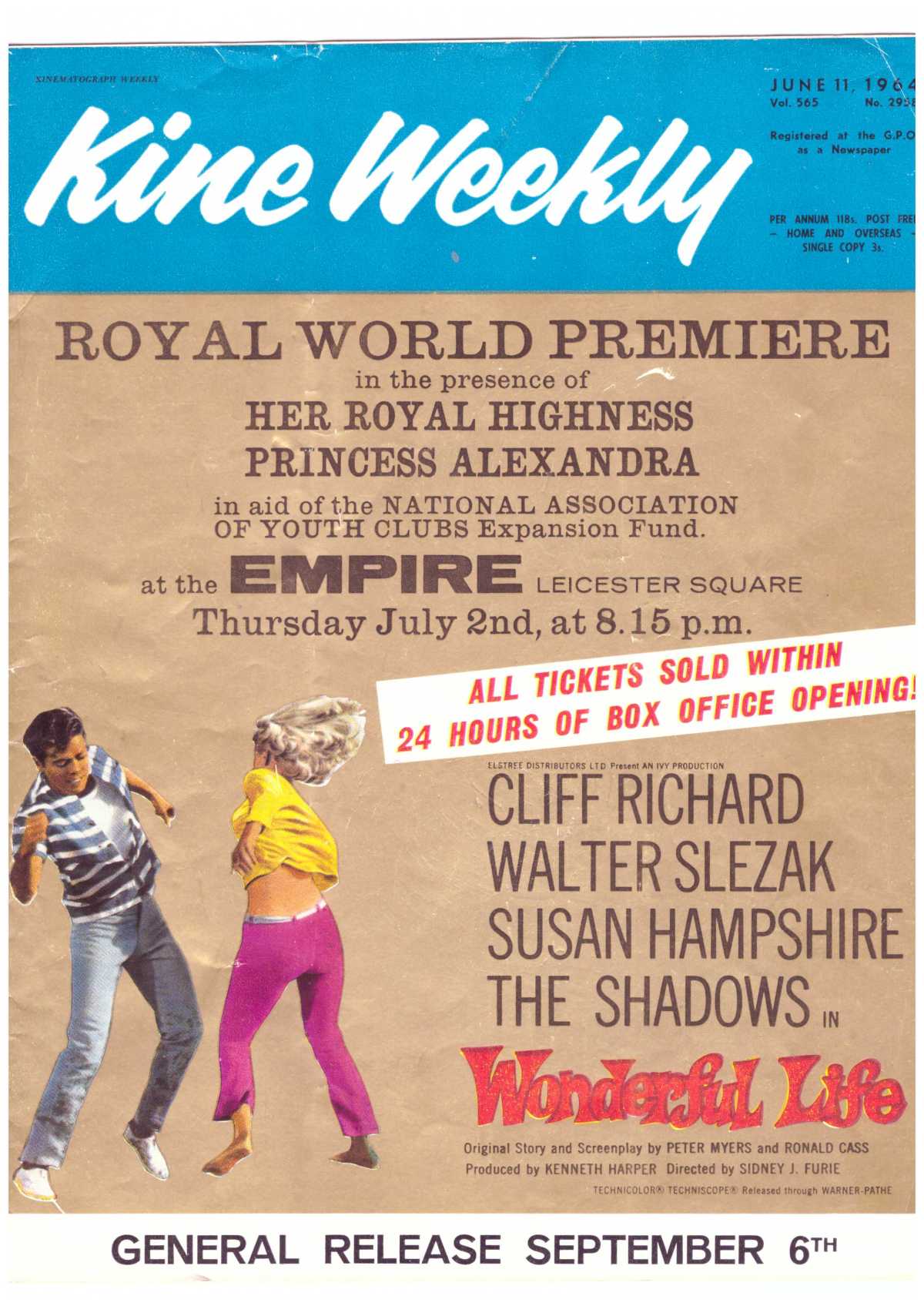 I have just discovered a new guilty pleasure. I was too young to remember when Cliff Richard was the British equivalent of Elvis and by the time I became aware of him he was already in the family-favorites league with his own television show and popping up in the wider consciousness from time to time with a number one single. But I was conscious that Cliff’s aspiring film career was totally obliterated by the emergence of the Beatles. I found Wonderful Life to be totally innocuous, highly enjoyable, charming fun. There’s no story to speak of beyond an affectionate spoof of Hollywood but it has zest and exuberance and some decent choreography by Gillian Lynne who went on to be deified for her work on the original London productions of Cats and Phantom of the Opera.

But there are some very funny visual gags, beginning with the opening scene when Cliff and Co are waiters on board a ship attending to a drunk whose glass moves out of reach every time the ship rolls. Having caused a power outage, they are chucked overboard in a dinghy and turn up in the Canary Islands where Cliff becomes a stunt man on the terrible Foreign Legion movie directed by a Hollywood ogre (Walter Slezak) and starring incompetent actress Susan Hampshire who has made a career of sorts playing the daughter of a sheik or sultan. You have to like a movie with lines like, “Follow that camel” and a geek (Richard O’Sullivan) whose scientific predictions invariably come undone. Cliff, realizing the lines are better sung than spoken, begins to make a musical on the back of the drama. And it’s true – the lines are good lyrics.

Britain had no reputation for musicals among the Hollywood cognoscenti unless you count the Jessie Mathews and Gracie Fields films of the 1930s which were far too parochial and contrived for American tastes and in terms of invention and musical technique a far cry from Lionel Bart’s Oliver! which would be filmed a couple of years later and in terms of originality not a patch on A Hard Day’s Night (1964) the same year. The songs are evenly contributed by various members of the Shadows – Bruce Welch composed the standout “A Matter of Moments” and with Brian Bennett the theme song – and the Peter Myers-Ronald Cass team who also wrote the screenplay. But this film comes across as naturalistic, rather than the contrivances of most Hollywood musicals. It doesn’t take much for these lads to strike up a song, any excuse will do. And the film is better for the lack of high emotion attached to every lyric.

You would be mightily surprised to learn that director Sidney J. Furie’s next film was stylish spy thriller The Ipcress File (1965) followed by Appaloosa (1966) with Marlon Brando and The Naked Runner (1967) starring Frank Sinatra. Here, he is in free-association mode, the ideas tumbling out, especially in the Hollywood parody dance numbers sections where we go from Chaplin pastiche to Greta Garbo and Groucho Marx, Fred Astaire-Ginger Rogers, West Side Story and James Bond. We have gangsters whose violin cases contain violins, a singing cowboy with subtitles (to explain the growth of the foreign movie) and a song about homesickness played out with Battersea Power Station in the background. If anybody can actually act they’re not putting any great effort into it. And that doesn’t matter either. The storyline is no more preposterous than many of the great Hollywood musicals. Everyone looks as if they’re having a whale of a time and I guess that would include the audience because the movie was the fifth-best performer of the year in Britain. This was the type of movie, during the rise of the permissive cinema, that you could take your grandmother to see and still come away surprised you had enjoyed it so much yourself.