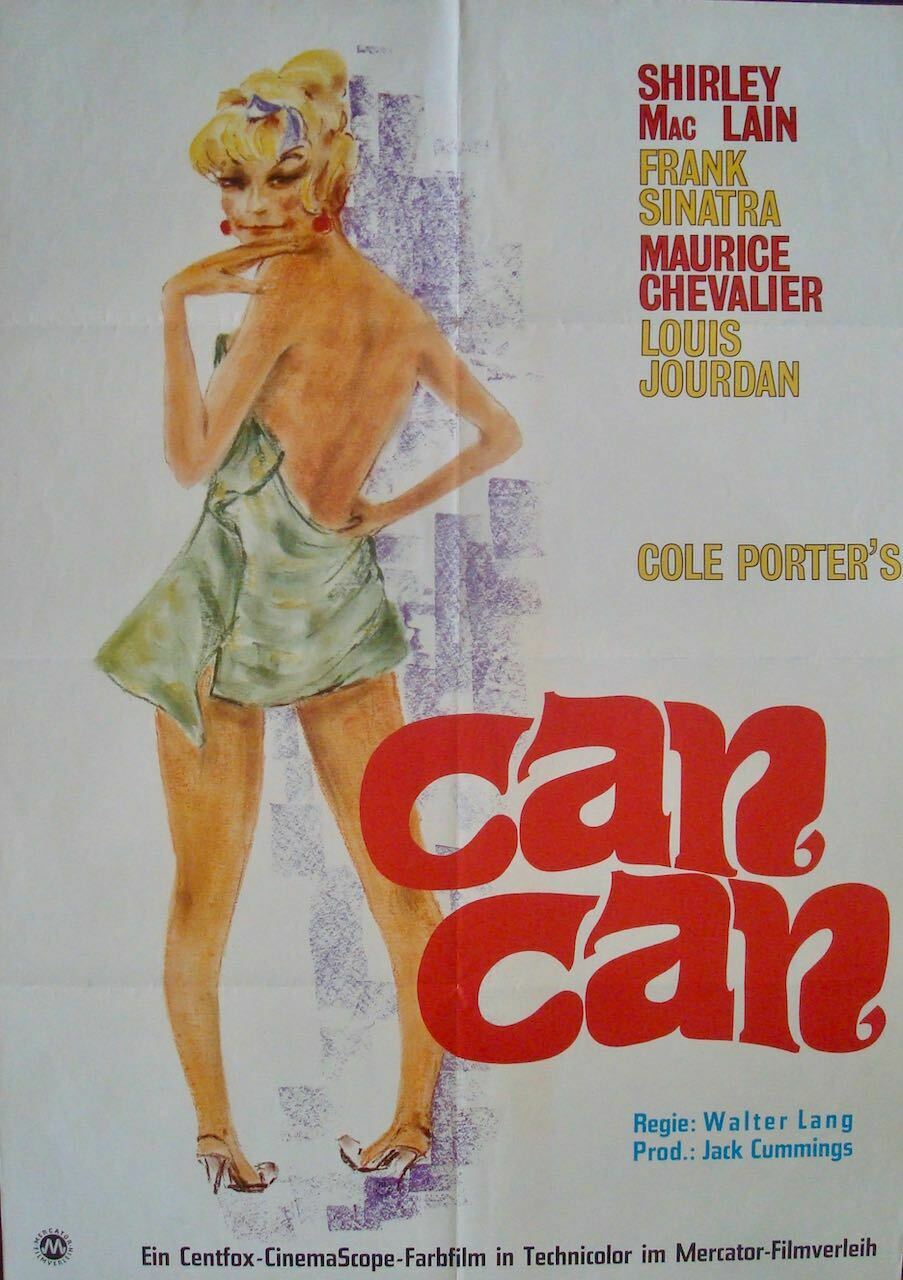 A sterling cast does justice to some great Cole Porter songs in an entertaining musical typical of the period. Apart from appropriating some stock footage, nobody was going to bother to head out on location when a Hollywood-ized version of Paris could be recreated on the set. While the film is ahead of its time in several ways – Simone (Shirley Maclaine) owns the nightclub and the women in the title dance are meant to be minus their panties, hence attempts by authorities to shut it down – the plot features an old-fashioned love triangle.

While the chief magistrate (Maurice Chevalier) turns a blind eye to the lewd dance, his younger colleague Phillippe (Louis Jourdan) does not and ensures Simone is arrested. Complications arise when Philippe falls in love with Simone who already has a lover, the lawyer Francois (Frank Sinatra) who is averse to committing to marriage. The four stars are all very charming and there is gentle comedy and effortless acting as the romantic knots are tightened and then unpicked. Hypocrisy is tested and found wanting. The courtroom scenes are amusing and most of the story focus is on how Phillippe can get round his principles and legal obligations to successfully woo Simone.

But in reality, the audience is here for the music, and to hear classic Porter songs interpreted by Sinatra and Chevalier. While the songs are top-drawer, what captured my imagination most was the “Garden of Eden” ballet with a stunning design and superb dancing by Simone and Claudine (Juliet Prowse).  The “Apache Dance” also boasts some singular choreography but otherwise while the “Can-Can” itself is rousing and well-done this is for obvious reasons a censored version.

The Cole Porter contribution includes: “I Love Paris,” “C’Est Magnifique,” “It’s Allright With Me,” “Let’s Do It,” and “Just One of Those Things.”

Walter Lang was a safe pair of hands in this genre having helmed Call Me Madam (1953), There’s No Business Like Show Business (1954) and Oscar-nominated for The King and I (1956). The screenplay was a harder slog. The original Broadway musical was a romance between the judge and the nightclub owner. Adding the lawyer Francois to the mix necessitated major changes to the story. But Dorothy Kingsley also had form, having been responsible for the screenplays of  Kiss Me, Kate (1953), Seven Brides for Seven Brothers (1954) and Pal Joey (1957). Co-writer Charles Lederer, although involved in Kismet (1955), had a better grasp of comedy, as seen in Gentlemen Prefer Blondes (1953) and It Started with a Kiss (1960).

Although not universally admired by the critics, it won two Oscars – color costume design for  Irene Sharaff and best music for Nelson Riddle. It didn’t hit a home run at the box office either and the finger was pointed at Twentieth Century Fox for committing the mortal sin of inflating revenue figures on its initial launch.

While not one of the all-time great musicals and put in the shade when compared to West Side Story (1961) and The Sound of Music (1965), it’s an enjoyable confection, the easy screen charisma of Sinatra, Chevalier, Jourdan and MacLaine holding it all together.