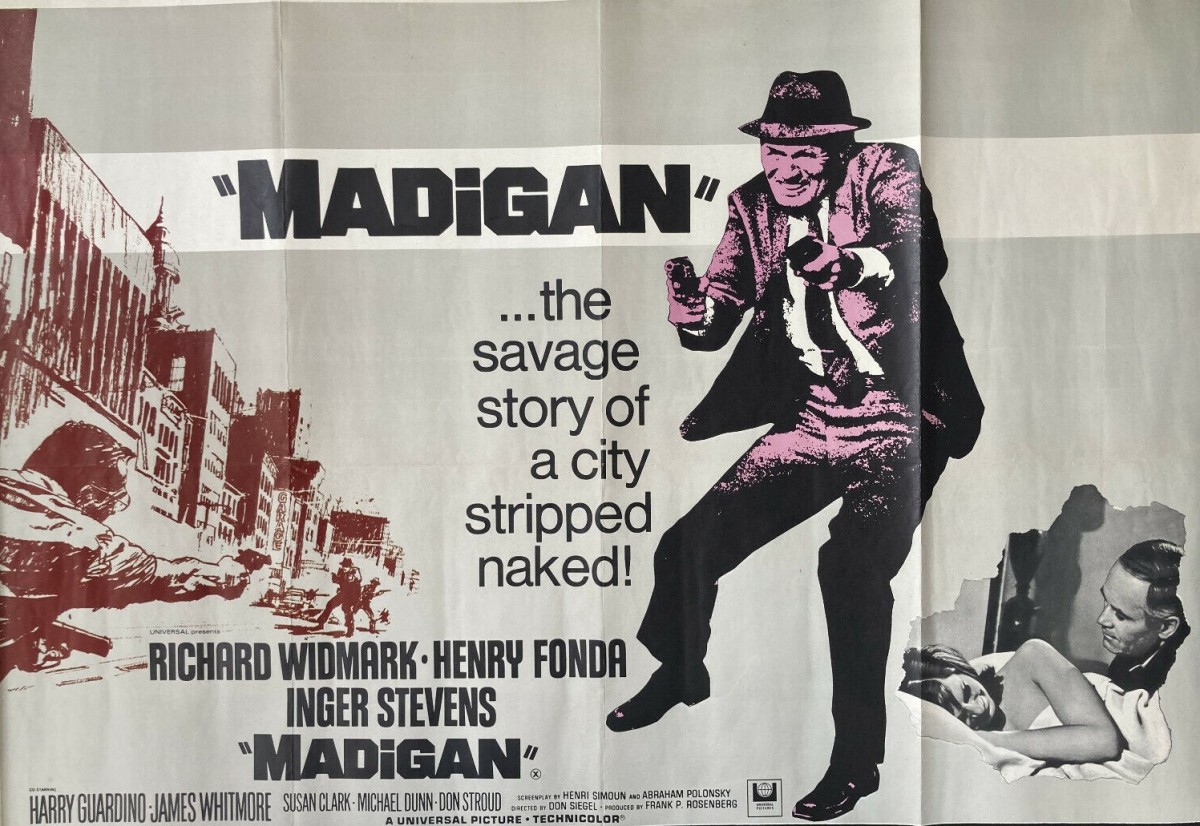 Reignited the careers of director Don Siegel (no Hollywood traction since Hell Is For Heroes in 1962), Richard Widmark (reduced to supporting roles) and Henry Fonda (no longer first name on the team sheet for the biggest pictures) and reinvented the cop thriller as a gritty urban affair. The plot – chasing down a suspect – is a MacGuffin to explore tough police methods, corruption, and the harm the job does to the domestic lives of the police.

Detective Dan Madigan (Richard Widmark) and partner Rocco Bonero (Harry Guardino) come woefully and embarrassingly unstuck when hood Benesch (Steve Ihnat) evades capture and steals their guns. They have 72 hours to bring him back or be suspended. So, basically, they spend most of the time following a bunch of leads, intimidating anyone who gets in their way, including a helpless secretary. And while Bonero is happily domesticated, Madigan’s lonely wife Julia (Inger Stevens) is fed up with late nights and broken promises to the extent of considering a one-night stand when hubby stands her up once too often.

Commissioner Russell (Henry Fonda) has his hands full dealing with the errant detectives  without the ramifications of corruption involving his best friend, long-time cop Chief Inspector Kane (James Whitmore). The widowed Russell would be a poster-boy for the principled cop except he’s having an affair with married woman Tricia (Susan Clark).

While Madigan is kicking and snarling his way through the underworld, Russell is trying to work out how to save his friendship and his affair. And while they might appear opposites, the classy top officer and the street cop, the uptight Russell envies Madigan’s way with people. Madigan is comped drinks and even a suite at the Sherry-Netherland hotel not merely because he’s a cop but because his charm goes a long way.

And while Russell dithers over helping out a friend, Madigan has no qualms about being taking for a ride by an old pal down on his luck and in need of an excuse to be bought a drink. When it comes down to it, Madigan is the better advert for humanity.

The soap opera elements don’t intrude too much on the thriller. Madigan and Bonero go in with fists blazing and work their way through a menagerie of skunks including Castiglione (Michael Dunn) and stool pigeon Hughie (Don Stroud). Benesch is a piece of work, not just clever enough to use his lover’s nudity to distract the attention of cops, but sufficiently hard-boiled to shoot a cop dead in the street and have little hesitation in opening fire on anyone who comes too close.

There’s some fascinating internal cop politics as Kane locks horns with Chief of Detectives Lynch (Bert Freed) over the latter’s insistence on suspending Madigan. And Russell has to finagle his way through the problems a well-heeled son is causing a rich doctor (Raymond Jacques).

Every time the pace slackens, the movie falls back on the old Chandler routine, have someone come through the door with a gun (a fist would suffice). Madigan is a driven cop, struggling to hold onto his marriage, Julia too often the sacrificial lamb. And for all his outward bravado, there’s a superb scene when unexpectedly encountering Russell he turns into a stammering ball of nerves, like a schoolkid anticipating a roasting from a headmaster.

Richard Widmark (The Bedford Incident, 1964) has a hell of a part, tough guy, check, but with a side helping of kindness, and pretty assured on the loving front, investing what could have been a fairly cliched character with a good deal of complexity. Henry Fonda (Firecreek, 1968) does a lot of pacing as his self-esteem implodes; how can he be a good guy if he’s running around with another man’s wife and how can he stick to his principles if he’s going to let a pal away with corruption?

Inger Stevens (Firecreek, 1968) is impressive as the disappointed wife trying to keep disappointment at bay. Harry Guardino (Hell Is For Heroes) always makes a good sidekick, but James Whitmore (The Split, 1968) digs into a sack of guilt as he attempts to avoid the oncoming storm. Don Stroud was almost auditioning for Don Siegel – he would turn up again in Coogan’s Bluff (1968) and Joe Kidd (1973); Susan Clark, too, Eastwood’s squeeze in Coogan’s Bluff. In smaller parts are Sheree North (Lawman, 1971) and Raymond St Jacques (Uptight, 1968).

But the show belongs to Don Seigel. There can be few directors so out-of-favor that they are able on their return to kick start a new cop cycle that culminated in Dirty Harry (1971). While this pulls no punches on the action front, it’s the quieter behind-the-scenes domesticity that almost as much catches the eye, the way he gives the characters time to breathe, opens them up to reveal more intricate inner workings.

It also spelled rebirth for blacklisted screenwriter Abraham Polonsky (Tell Them Willie Boy Is Here, 1969) in his first credit under his own name for 17 years. He didn’t do it all himself, though, Howard Rodman (Coogan’s Bluff) sharing the chores, the pair working from the novel The Commissioner by Richard Dougherty.