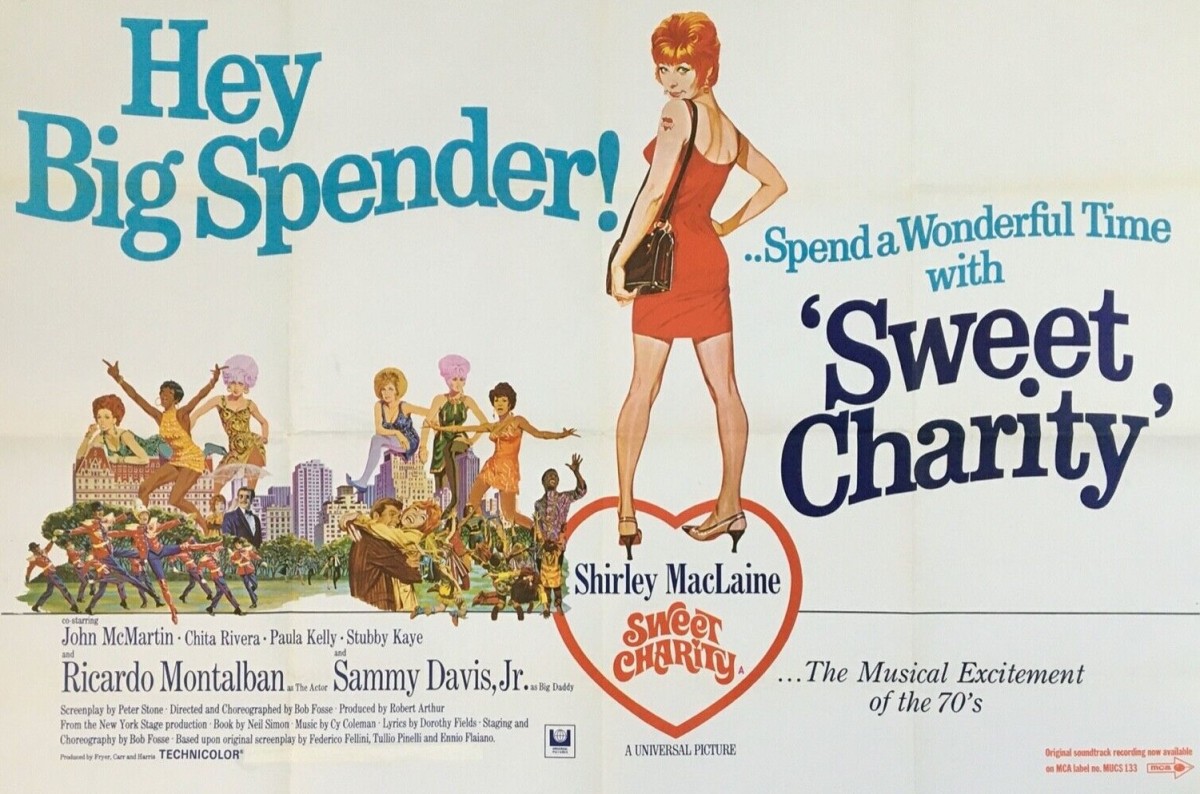 Never mind Bob Fosse’s debut, this was unusual for a number of reasons: a hilarious meet-cute, a raft of one-liners and being based on Fellini’s Nights of Cabiria (1957). So it could easily have been remembered mostly as a quiz question. But with Fosse at the helm it was a lot more than the sum of those particular parts and introduced a new-style director whose verve, choreography, stylistic flourishes and adult subject matter had wowed Broadway audiences.

Star Shirley MacLaine (Gambit, 1966) adds another layer to her trademark portfolio of losers in love. Hope Valentine Charity (MacLaine) is overly optimistic given her circumstances, robbed of her savings by her fiancé, nearly drowning in the process, the prospects of her switching from a career as a dance hall hostess severely limited by her lack of formal education and basic office skills.

So it’s just as well that she lands millionaire Vittorio (Ricardo Montalban) and might have enjoyed an indulgent romantic interlude had their evening not been interrupted by his wife Ursula (Barbara Bouchet), Charity condemned to spend a humiliating night hiding in the closet.

A chance meeting with the claustrophobic Oscar (John McMartin), doom-laden and intensely shy, appears to lead to unlikely redemption. Her presence cures him of a bunch of neuroses and marriage is on the cards until reality raises its ugly head, and the movie ends on a surprisingly negative note for a musical.

A dance hall hostess – taxi dancer in the parlance because she is hired by the half hour – is equivalent to the modern laptop dancer except that there is no nudity involved. On the other hand, there is none of the hands-off policy exercised in such contemporary operations, and  men buying her time believe that she should accommodate their straying hands. So it’s somewhat unexpected that her colleagues remain so good-tempered and backstage is presented as a bitching-free zone, some accepting their reality, others, like Charity, inclined to the fantasy that a Prince Charming will rescue them.

In terms of song quality it’s not in The Sound of Music (1965) league, boasting only two numbers – “Hey Big Spender” and “If My Friends Could See Me Now” – that you were likely leave the cinema humming. And it certainly suffers by MacLaine not having the voice of a Julie Andrews or Barbra Streisand, or the dance skills of Gwen Verdon who originated the part on Broadway, but otherwise she invests the character with enough believability and exudes charm by the bucketload. She has to be applauded for taking on such a gritty role in the first place.

Of course, the movie belongs to the director, the embryonic Fosse, who brings a new look to the movie musical, from the bored dancers draped in unexpected physical shapes during “Hey Big Spender” to the finger-snapping, angled choreography and the celebration of the seedy, the opposite of the glossier Rodgers & Hammerstein, Lerner & Loew vehicles. A few years later, further acceptance of permissiveness would allow him to explore such worlds in more realistic depth, check out Cabaret (1972) and All That Jazz (1979).

There’s a great turn from Sammy Davis Jr (Ocean’s Eleven, 1960) as a snake-hipped hippie preacher, his appearance somewhat out of place though offering contemporary comment, Oscar taking Charity to this literally underground service because he belongs to a Church-of-the-Month Club.

There’s a goodly number of laughs courtesy of the original Neil Simon book for the musical and the meet-cute of the couple trapped in an elevator is very funny.

John McMartin, in a rare movie leading role, is good as the hapless romantic, Ricardo Montalban (Sol Madrid, 1968) as his opposite, and there’s sterling support from Stubby Kaye (Cat Ballou, 1965), Barbara Bouchet (In Harm’s Way, 1965) and Chita Rivera in her debut.

It was probably too much to ask that this hit the ground running, what with Hollywood in financial meltdown in part as a result of budgetary excesses like this (it cost $10 million), a movie that never quite extended a grip on the roadshow audiences necessary to turn it into a hit, a star lacking an exceptional voice, and a storyline that appeared to alienate musical lovers. Most people who viewed it on initial general release saw a heavily truncated version.

It stands up much better today, mostly thanks to Fosse’s direction, but also due to the sleazy background, and it has to be said, setting aside any vocal deficiencies, this is one of Shirley MacLaine’s best performances.

Of course, I saw it at its best, on the big screen at the Widescreen Weekend in Bradford, so I might be slightly biased, but it does have genuine vigor and a refreshing originality.