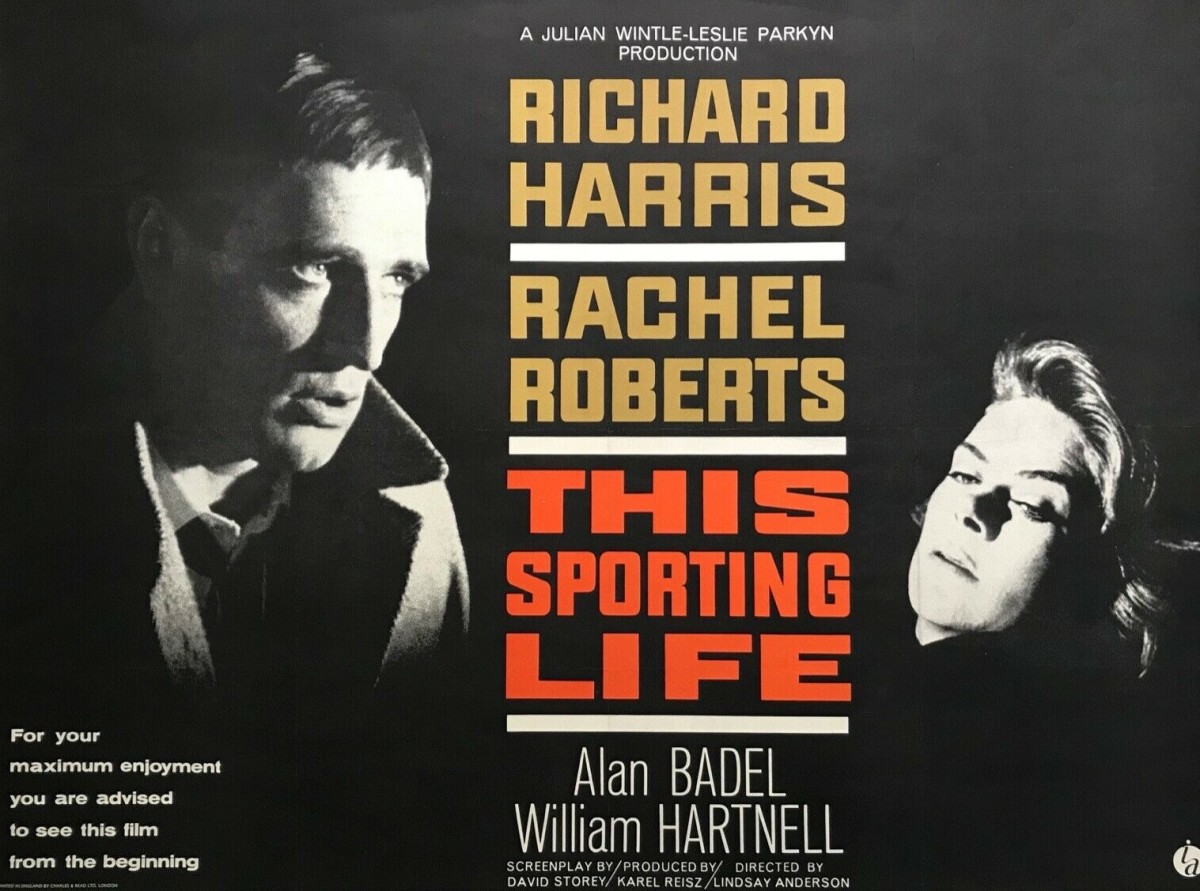 What began as the last gasp of the British New Wave working class kitchen sink drama has now after a six-decade gap resolved into a struggle over political and sexual ownership. Macho athlete Frank Machin (Richard Harris) jibes against his paymasters at a Yorkshire rugby league club – in similar fashion to Charlton Heston in Number One (1969) –  while trying to hold sway over widowed landlady Margaret (Rachel Roberts). While documenting the class divide over which British writers and directors obsess, Lindsay Anderson’s debut takes a wry look at power.

Machin belongs to the Arthur Seaton (Saturday Night and Sunday Morning) class of loudmouth boors, determined to take as much as they can, riding roughshod over anyone who gets in their way, even attacking players of his own team. Although a fan favorite, his position at the club still requires backing from the moneyed directors, support that appears go awry when he rejects overtures from Mrs Weaver (Vanda Godsell), wife of a board director (Alan Badel). While Margaret eventually succumbs, her actions fill her with shame, the presents he buys making her feel like a kept woman.

Both Machin and Margaret are the rawest of creatures, forever appearing ready to topple into some emotional crevasse of their own making. At a time when marriage was the rock of society and women had little independence, a woman could dwindle away in face of scorn from neighbours, while a man lacking emotional intelligence would crumble in the face of his own fears.

The non-linear narrative blurs some aspects of the story. There is no reference to Machin’s background save that he was once a miner and still works somewhere unspecified to supplement his footballer’s income. He rejects the paternalism of ageing scout Johnson (William Hartnell) while appears to be seeking to resolve maternal issues, the widow with two small children at least a decade older, and although he could easily afford better accommodation refuses to move out.

His obsession with Margaret is never properly explained, except by her, who sees him as acting like an owner. Equally, Margaret is the opposite of the women in virtually every movie of the period, for whom marriage is the sole ambition. Whether she still grieves over the loss of her factory worker husband, who may have committed suicide, or loathes Machin’s dominant nature is never explained. It might have been better if they had married for unhappy husbands and wives tend to give each other both barrels, emotions never concealed. Or she could be in the throes of an undiagnosed depression – author David Storey suffered from this all his life – expressed as anger.

Machin is the other side of the British Dream – the assumption that anyone who escapes going down the pits or the mindless grind of the factory will automatically enjoy happiness. While Machin revels in his celebrity, he has no idea how to make his life happier. This is in contrast to the other footballers who either enjoy womanizing and drinking or are married or engaged and accept the unwritten rules of the game rather than fighting everyone.

There is plenty grime on show, and the football field has never been so pitilessly portrayed, and as a social document the movie fits in well to the small sub-genre of films depicting working class life, but the picture’s thrust remains that of two opposites who will clearly never meet except in the delusional head of Machin.

Power is demonstrated in various ways. Weaver has the clout to give Machin a hefty signing-on fee against the wishes of the board, Weaver’s wife takes her pick of the footballers to satisfy her sexual needs, Machin believes he is entitled to berate waiters in an upmarket restaurant, while Margaret is demeaned by accepting his present of a fur coat.

Lindsay Anderson (If… 1969) no doubt believed he was making an excoriating drama about the class struggle, but in fact has delivered a classic thwarted love story. David Storey wrote the screenplay based on his own novel.