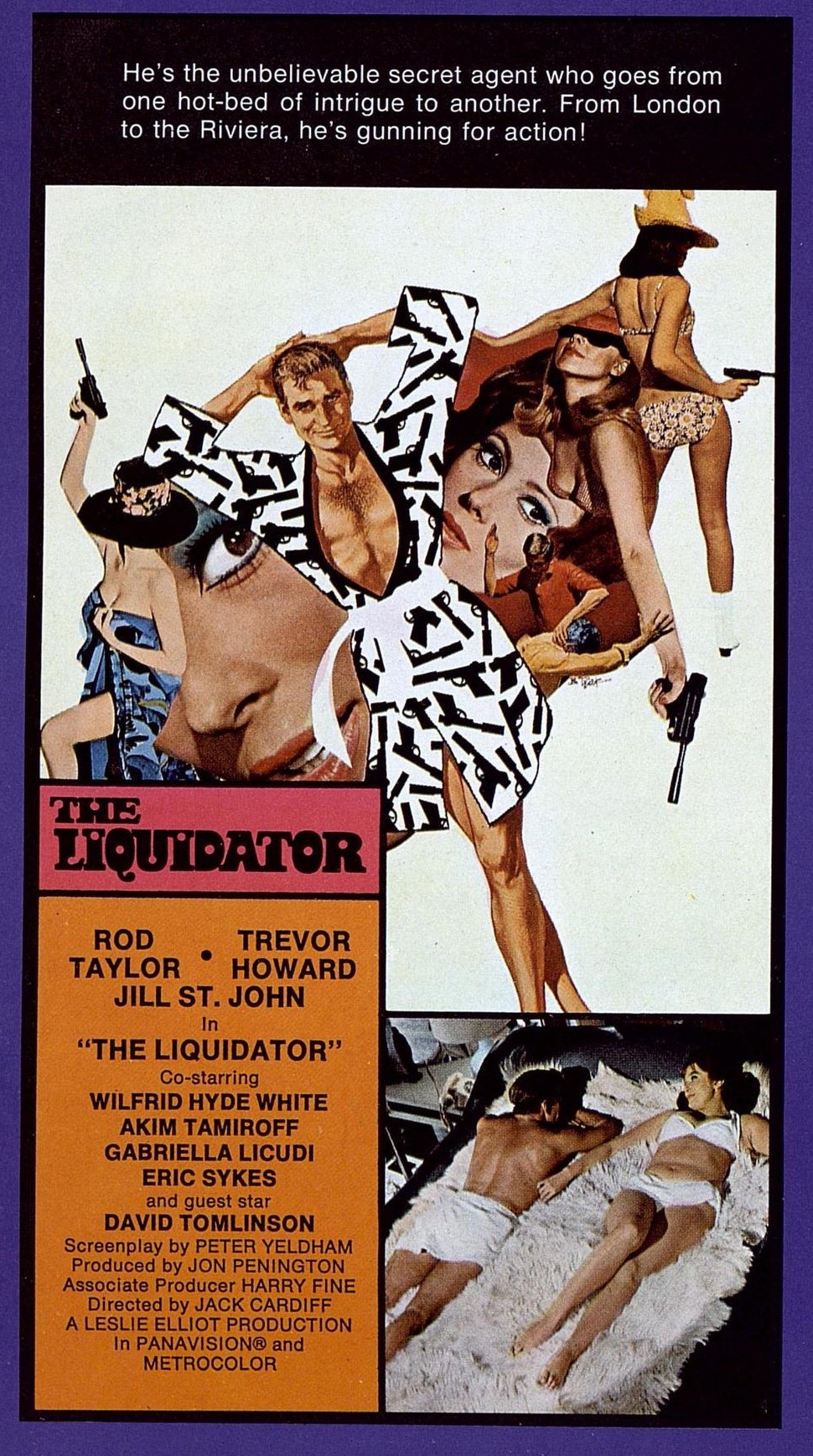 Brilliant premise, brilliant execution, brilliant acting. The best send-ups are driven by their own internal logic and this is no exception: spy boss, known simply as The Chief (Wilfred Hyde White), determines in most un-British fashion to get rid off a mole in the operation by eliminating all potential suspects. Bristling Colonel Mostyn (Trevor Howard) recruits Boysie Oakes (Rod Taylor) for the job, believing Oakes showed particular gallantry during World War Two, unaware this was pure accident. Oakes is given all the perks of a super spy – fast cars, fashionable apartment – and attracts women in a way that suggest this is also a perk and once realizing that being a killer is outside his comfort zone delegates the dirty work to another hit man Griffen (Eric Sykes).

The sweet life begins to unravel when Oakes takes a weekend abroad with Mostyn’s secretary Iris MacIntosh (Jill St John) and is kidnapped. Forced to battle for survival, another Oakes emerges, a proper killer.  Cue the final section which involves trapping the mole.

Where films featuring Matt Helm and Derek Flint imitated the grand-scale espionage they aimed to spoof, the laughs here come from small-scale observation and attacks on bureaucracy. According to regulations, Oakes’ liaison with MacIntosh is illicit. There is endless paperwork. Apart from an aversion to needless killing, Oakes has terrible fear of flying. Nobody can remember code names or passwords. Oakes’ automobile numberplate is BO 1 (the letters in those days being a standard acronym for “body odor”). It is all logical lunacy. And even when the story gets serious, it follows logic, a ruse, a dupe, a climax pitting resolve against human weakness.

Best of all, the parts appear custom-made for the players. Rod Taylor (The Birds, 1963), in his first venture into comedy, displays a knack for the genre without resorting to the slapstick and double takes requisite in the Doris Day pictures to follow. And he is a definite screen charmer.

By this point in his career the screen persona of Trevor Howard (Von Ryan’s Express, 1965) had been shorn of subtlety. He was generally one choleric snort away from a heart attack. Here, while the narrative pricks his pomposity, he remains otherwise ramrod certain. The audience is in on the joke, but nonetheless his genuine ability as a spy master is not in question. On the other hand Jill St John (Who’s Minding the Store, 1963) is allowed considerable leeway in the subtlety department, as a demure English rose rather than the sexier roles into which she was later typecast.  In some respects British television comedian Eric Sykes is miscast. It is a particular English joke to present him as a killer since on television (in shows unlikely to be shown in America) he was hapless.

And it is worth mentioning Akim Tamiroff whose villainous stock-in-trade is allowed greater depth. David Tomlinson (Mary Poppins, 1964) and Gabriella Licudi (You Must Be Joking!, 1965), have small parts. Aso watch out for future British television stars Derek Nimmo (Oh, Brother, 1968-1970) and John Le Mesurier (Dad’s Army, 1968-1977) as well as Jennifer Jayne (Hysteria,1965) and Betty McDowall (First Men in the Moon, 1964).

Director Jack Cardiff had tried his hand at comedy before with My Geisha (1962) starring Shirley Maclaine but was better known for Oscar-nominated drama Sons and Lovers (1960) and action picture The Long Ships (1964).  John Gardner, who wrote seven books in the Boysie Oakes series, later penned James Bond novels.

It is well worth considering whether The Liquidator would have punctured the success of both Our Man Flint (1966) and The Silencers (1966) and sent spy spoofery in a different direction. It had premiered in the U.K. prior to both but litigation held up its American launch  until long after that pair had gone on to hit box office heights.

Catch-Up: Previously reviewed in the Blog are Jack Cardiff’s The Long Ships, Rod Taylor in The Glass Bottom Boat (1966) and Hotel (1967) and Trevor Howard in Operation Crossbow (1965) and Von Ryan’s Express (1965).