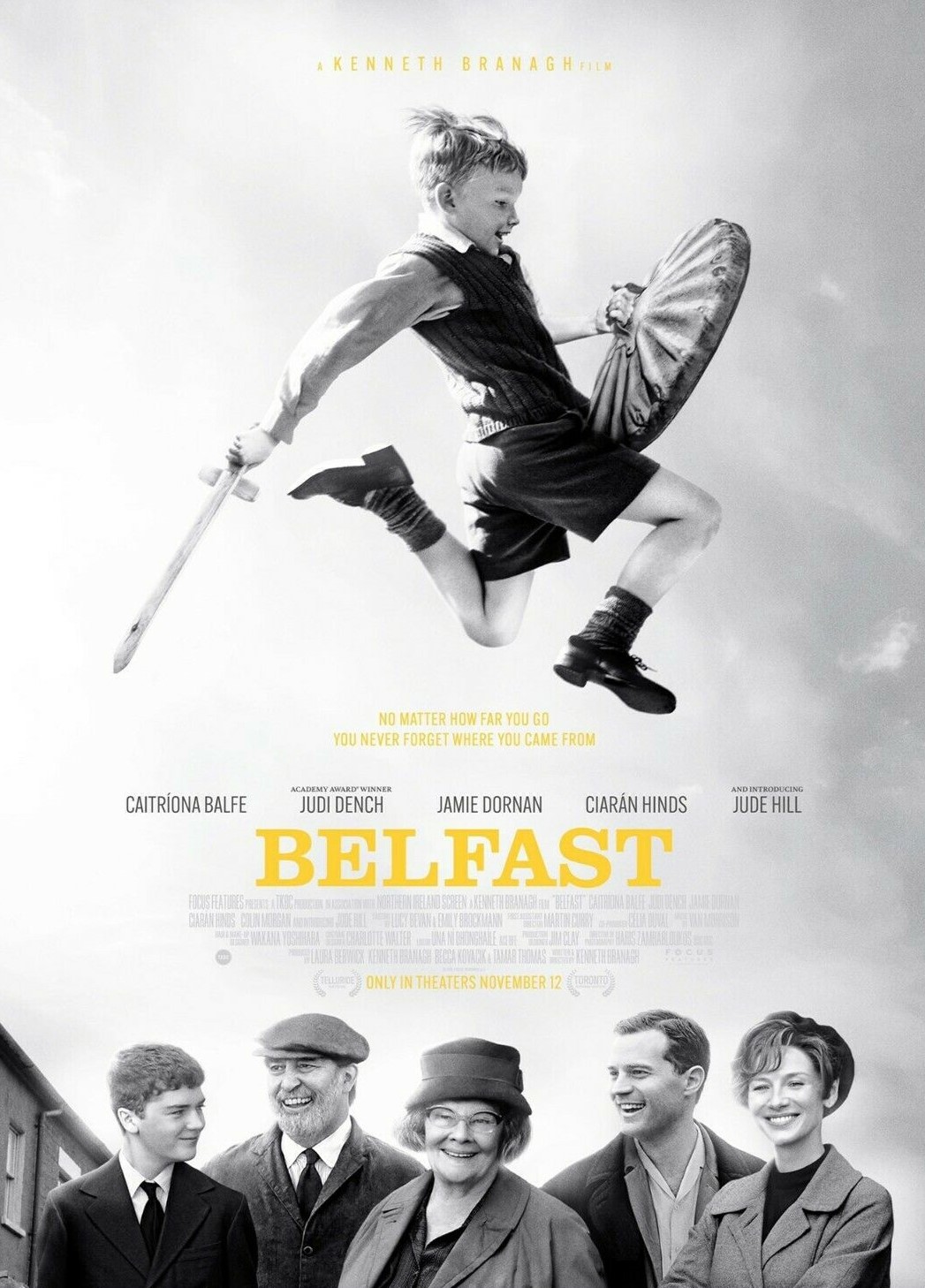 Except for people trying to kill him, this would be a heart-warming tale of young Buddy (Jude Hill) growing up in a tight-knit community in Northern Ireland in the late 1960s. In the vein of John Boorman’s Hope and Glory (1987) with war – civil war in this case – seen through the eyes of a child, instead we witness how religious differences taken to the extreme tear neighbourhoods apart.

With violence taking up so much of the foreground, there was a danger the lives of the characters would be solely dictated by their reaction to the conflict. But, in fact, a whole world of family comes very much alive, mostly in understated and often subtle fashion, with Buddy very much on the fringes of the adult world. Just as a film about childhood it is simply marvellously evocative, the boy wanting to join a secret gang, stealing from a shop, playing in the street, going to the pictures, agog at old westerns on television, dressing up as someone from Thunderbirds. On top of that you had to somehow accommodate the deranged habits of teachers that you accepted without question, priests that scared you half to death and trying to work out in your head the insoluble problems of a universe nobody can understand anyway.

Buddy is at just at the right age of wide-eyed innocence before teenage problems take their toll and his wee romance with the girl he fancies is as cute as this rough-edged movie gets. Romance is a big thing here. Clear-sighted romance, not the kind that sends characters spinning off into passionate delirium or screaming at their partner non-stop. His mother (Catriona Balfe) is a vividly-drawn character, mother most of the time while her husband (Jamie Dornan) is away working, the kind of mother who is forced to be stoic, with bills mounting up, and yet high on romance when the opportunity arises, the Everlasting Love sequence a stand-out.

The father, except for not paying his taxes, is almost a Gregory Peck of a father, an upright, stand-up type of guy, a fount of wisdom for a son, and yet as a man never backing down. And any grandfather (Ciaran Hinds) that has the savvy to continue a half-century of romance with his wife (Judi Dench) by singing the love song from Camelot will rise in anyone’s estimation. In some senses, this is simply a rite of passage picture, Buddy engaging in first romance, doing some good things and some bad, encountering the death of a loved one.

Some of the scenes of violence are stunning, the tanks rolling through the streets, men patrolling at night with flame-lit torches, the riots. But you are more likely to remember the moments of tenderness and the family coming together whether opening presents at Xmas or thinking they are going to hurtle over the cliff along with Chitty Chitty Bang Bang though you were more likely to be interested in duelling dinosaurs at that age than Raquel Welch at her most “Raquel” (One Million Years B.C).

And all of this gets you asking: Kenneth Branagh, what have you been doing all this time? Almost two decades of throwing away your directorial talent and only Hercule Poirot memorable on the acting side. This is a brilliant autobiographical story with a crisp script with superb performances all round.

But why on earth was it in black-and-white? Directors film in black-and-white due to a) artistic pretension b) shortage of money or c) because they disdain the mass audience. Sticking on a few minutes of touristy Belfast stuff in color at the start in order to satisfy the funders seems bizarre. My hope is that worth of mouth will bring it the audiences it deserves and that people are not put off by the arrogance of a mainstream picture being made in black-and-white.