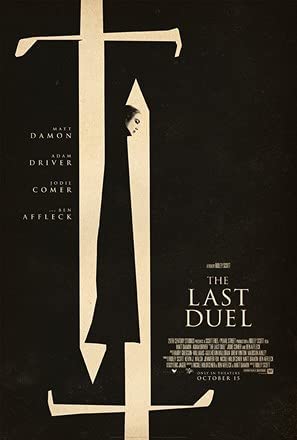 A surprisingly contemporary core, bolstered by a quartet of excellent performances, drives Ridley Scott’s bold Rashomon-style historical tale. Despite its length it’s less of a historical epic in the style of Gladiator (1999) and more of an intimate and intricate exploration of power – and its lack. Each of the main characters, including and especially the women, while exerting some kind of power nonetheless are in thrall to a superior being whose word is absolute law. Challenging that authority could result in instant death. It’s a slow-burn for sure but exerts a tenacious grip as the story unfolds from three points-of-view to a double climax, both riveting for different reasons.

And it’s far from typical Ridley Scott except in attention to historical detail. The battle scenes are almost perfunctory – in fact few end in victory – and except to demonstrate bravery do not follow the usual heroic template. There’s none of the trademark Scott cinematic sweep although the duel itself is exceptional.

In 14th century France Marguerite (Jodie Comer), wife of Sir Jean de Carrouges (Matt Damon), accuses Jacques Le Gris (Adam Driver) of rape, the accusation finally settled by duel to the death. All three characters are given the chance to give their version of the story and this is where it becomes fascinating as shades of personality are filled in.

At the outset Jean comes across as brave, impulsive, marrying Marguerite to save her honour (her father is a traitor), and when wronged willing to challenge authority. But as other perspectives unfold he is revealed as blustering, ambitious, more interested in his wife’s sizeable dowry than her honour, over-proud, and a poor manager of his estate. While brave, educated and charming Le Gris turns out to be a greedy, conniving bed-hopper. Initially presented as a grateful wife and little more than an adornment Marguerite is revealed as the most courageous of all, an able estate manager, challenging the King, accepting the prospect of death rather than, as was apparently the custom of the times, allowing the rape to go unremarked.

The sexual mores of the era are examined in depth, the worst examples of male prerogative sometimes just touched upon in passing, for example, since a wife is her husband’s property, in law he is the one besmirched not her. In taking sexual power as his central theme rather than the triumphs and woes of the men, Scott takes a huge risk in alienating a following expecting more action and cinematic bravura, but the bold story-telling pays off and although starting with Alien (1979) the director has a record of strong female characters this has more in common with Thelma and Louise (1991) where wronged women are backed up into a cul de sac.

Rejecting the heroism route allows Scott to present far more rounded characters. None of the four principals conforms to type. Damon is neither the common man nor the action hero, but a boor. Driver is neither charming seducer nor outright villain but somewhere in between, living on his wits. Comer cannot rely on female machismo or cleverness but must remain stout in the face of an onslaught of humiliation. And mention must be made of Ben Affleck as Pierre d’Alencon, employer of Le Gris and master of Carrouges, who is cocky, immoral, amoral, greedy, shifty and cunning. Other standout performances feature Alex Lawther (The Imitation Game, 2014) as a gleeful king and Harriet Walter (Atonement, 2007) as a loathsome and cruel mother-in-law. I just hope Oscar voters recognise at least some of these perfomances.

It’s worth paying attention to the screenplay by Nicole Holofcener (Oscar-nominated for Can You Ever Forgive Me, 2018) and Damon and Affleck (their first joint effort since Good Will Hunting, 1997) and note how the language the characters employ changes according to the perspective. Words that we imagine in one section that appear to be spoken by one character in another section are delivered by someone else entirely.

I am a huge fan of Ridley Scott and while I came looking for adventure in the style of Gladiator (2000) or his other historical masterpiece Kingdom of Heaven (2005) I came away more than satisfied in the way he altered his style to suit the story almost in the same manner as he had done with American Gangster (2007), another picture about power.

You will probably be aware by now that this has been a colossal box office bomb and although the film has enormous merit you can see why audiences looked the other way. Oddly enough, I think it will acquire a bigger audience through small-screen streaming since it is really a drama.  I would still recommend catching it at the cinema but there’s fair chance it will not last for its full 45-day window.

I tend to judge directors not by critical acclaim but by a more rudimentary measure – how often I watch their pictures. I have seen Alien, Blade Runner (1982), Thelma and Louise, Gladiator, Kingdom of Heaven, American Gangster, the Martian (2015)  and even the flawed Prometheus (2012) and Black Hawk Down (2001) more than half a dozen times each – often three or four times at the cinema – and I have a notion that The Last Duel will comfortably fit into this elite.