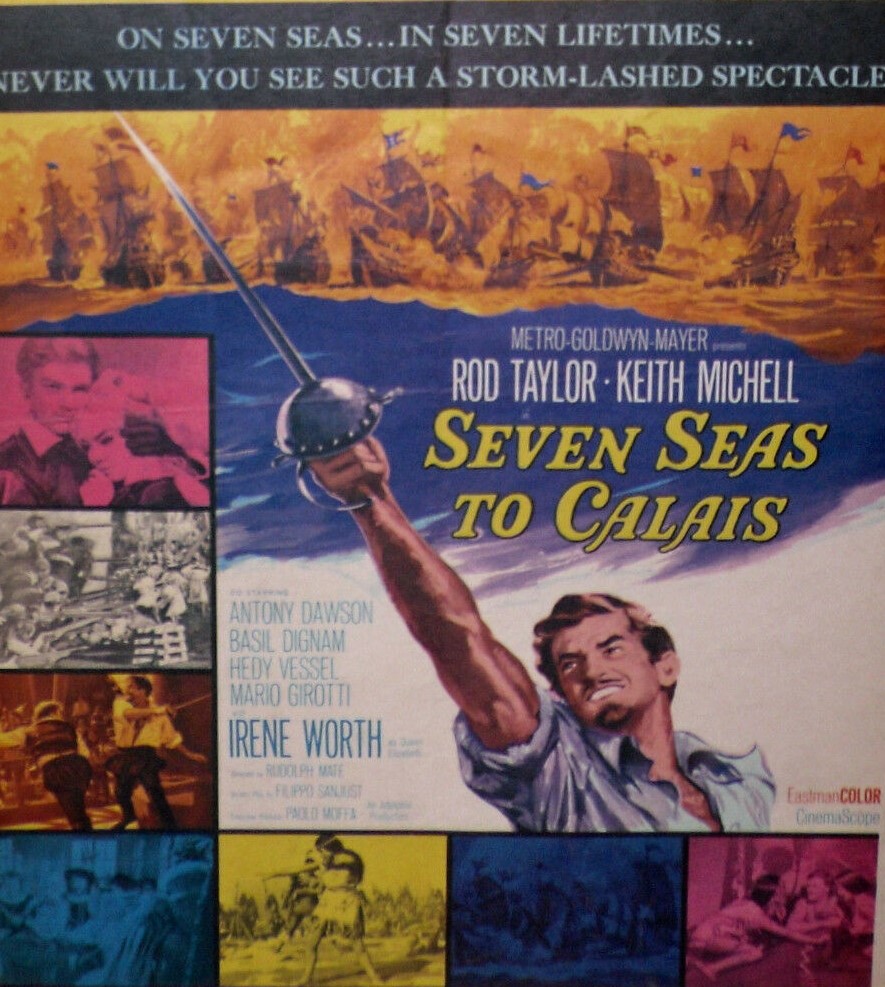 In between hi-hat Hollywood endeavors The Time Machine (1960) and The Birds (1963) Rod Taylor made a couple of pit stops in Italy. Here, he tries his hand at a swashbuckler and does a pretty good job of it, depicting famed English naval hero Sir Francis Drake, in a story that covers about a dozen years from him circumnavigating the globe to masterminding the defeat of the Spanish Armada in 1588.

Not content with glorifying tales of his derring-do as he robs the Spanish of their gold, the producers also mine a rich seam of political intrigue as the Spanish King Philip II seeks to nullify the English threat first by a treaty and then by conspiracy before embarking on full-blown invasion. Queen Elizabeth (Irene Worth) proves a political maestro, telling the Spanish what they want to believe and condemning Drake’s activities in public while in fact privately financing his expedition and relying on his booty to fund her navy.

After putting down a potential mutiny, most of Drake’s time is spent plundering Spanish galleons or gold mines. When not pillaging, Drake takes time out from his adventures to discover potato and tobacco and for a romantic dalliance with what appear to be Native Americans (judging from the feathers they wear) including a young woman called Potato (Rossella D’Aquino). It is left to his number two Malcolm Marsh (Keith Michell) to carry the main subplot which has French beauty Arabella (Edy Vessel) in his absence taking up with Babington (Terence Hill), a traitor with an eye to freeing the imprisoned Mary, Queen of Scots (Esmeralda Ruspoli).

There are more than enough swordfights for purists and Drake employs a certain amount of cunning and bravado in his various piratical enterprises. Clever filming makes the ships look realistic enough, though in long shot they do resemble toys. In making it look as though Drake has returned from his voyage in the nick of time to save Elizabeth from the Spanish aggressors, the producers neatly kaleidoscope the actual time frame. Elizabeth takes no prisoners and there are spicy exchanges between the queen and the pirate.

Rod Taylor presents a more muscular and athletic screen persona than in any of his previous pictures and his presence exudes authority but he also has that lightness of tone that would become a trademark. However, American stage actress Irene Worth just about plays him off the screen, her regal bearing hiding an agile mind.  Keith Michell (The Hellfire Club, 1961) makes a strong impression as does future spaghetti western star Terence Hill, (They Call Me Trinity, 1970) credited here as Mario Girotti. Edy Vessel (The Thief of Baghdad, 1961) only made two more films, although one was Fellini’s 8½ (1963). This was the second film outing after Antonioni’s L’Avventura (1960) for Esmeralda Ruspoli

Strangely enough, given the part Drake played in English history, he has been dealt a poor hand in the movies. A British television series Sir Francis Drake (1961-1962) starring Terence Morgan was unlikely to have instigated this picture so it is odd to rely on Italy for the only picture, regardless of its veracity.

In the portfolio of veteran director Rudolph Mate (When Worlds Collide, 1951), this immediately followed on from The 300 Spartans (1962) but lacks that film’s rigor and vigor. The script was dreamt up by Filippo Sanjust (also Morgan the Pirate).