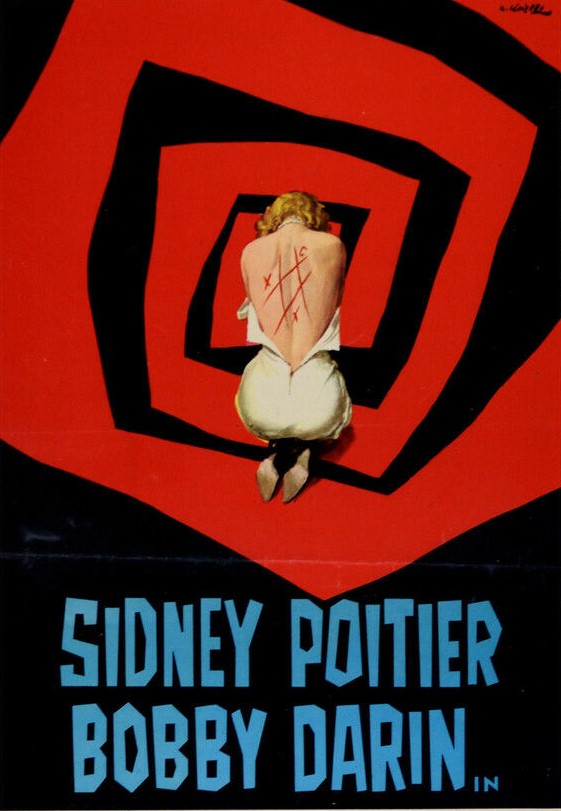 Central to this under-rated tale of psychopathy and racism is one extraordinary scene, possibly the most exceptional bar-room sequence ever filmed. In the annals of imaginative repulsion, it ranks alongside the rape committed by Alex and his “droogs” in Stanley Kubrick’s A Clockwork Orange (1971). It begins with mere intimidation as an unnamed young man (Bobby Darin) begins to etch into a bar counter the lines and symbols of Tic-Tac-Toe (a.k.a. Knots & Crosses or Noughts and Crosses). Discovering tins of paint, the man and his gang proceed to cover the entire bar – floor, walls, ceiling, even tables – with the same symbols.

The humiliation is ratcheted up a notch when the gang leader forces tavern owner (Howard Caine)  to lie on the floor behind the counter where he cannot see the bar hostess (Mary Munday), rigid with fear, being tormented. Using lipstick rifled from her handbag, the man decorates her face in the same fashion before pulling down the back of her dress and doing the same there. Fortunately, the rest of the scene, presumably ending in rape, is left to our imagination.

Other potent scenes show how the man arrived at his crazed state, smothered with affection by a weak mother (Anne Barton) who has taken to bed in order to escape his drunken, raucous father (James Anderson) who taunts his ineffective wife by flaunting in her face his casual pick-ups and making love to them in the same room. Indicative of the lonely child’s disturbed personality is that when he invents an imaginary playmate, it is to have someone to subjugate, making his fictional friend lick his boots.

Imprisoned during the Second World War for sedition, the man, suffering from blackouts and nightmares – in which he imagines himself clinging to the edge of a giant plughole before being swept away by a torrent of water from the taps – becomes a patient of a young, also unnamed, doctor (Sidney Poitier) whom he subjects to racial abuse.  The doctor, physically bigger and more imposing than the patient, would like to simply give him a good thumping, but his profession necessitates that he treats this objectionable person as just another patient. And eventually they come to enough of a concord that the patient accepts treatment although the doctor suspects that his core personality has not changed.

The movie is layered with themes other than psychopathy and psychiatry. While the racist element is to the fore, including the doctor’s need to prove himself in a white man’s world, and the lack of diversity in this particular medical field at that time, director Hubert Cornfield also explores the growth of right-wing extremism among the disaffected who see no contradiction in still espousing traditional American values, for example giving the Nazi salute while singing in all sincerity the national anthem. The African American doctor has to come to terms with lack of objectiveness when dealing with such an abhorrent person.

The movie flits between scenes between the two protagonists staged in a stagey manner and  expressionistic almost dreamlike sequences representing the patient’s upbringing such as being menaced by his butcher father among the swinging carcasses of the store. The patient flashbacks are shown without dialogue, explanation given in voice-over by either the patient or the doctor.

Reliance on visual dexterity, however, detracts from the tension and director Hubert Cornfield (The 3rd Voice, 1960) is also hampered by an unnecessary framing device which results in the story being told in flashback – leading to a conflation of flashbacks: the older Poitier explaining his earlier problems dealing with a difficult patent and listening in turn to the patient’s own life story. So the pressure indicated by the title is often undercut and does not build as much as you might expect. Critical reaction in those days pivoted on the racism elements, but a contemporary audience is almost certainly going to be as influenced by sequences involving the patient, so the picture automatically becomes more involved and Cornfield’s visual mastery more appreciated.

You can detect the influence of producer Stanley Kramer. In his capacity as director he had explored psychiatric therapy and anti-semitism in Home of the Brave (1949) and racism in The Defiant Ones (1958) also with Poitier. As producer he was responsible not only for selection of the original material, based on a short story The Fifty-Minute Hour by Robert M. Lindner, but also imposed the framing device, which Kramer wrote. Those scenes relate to another psychiatrist (Peter Falk) coming to a much older and experienced Poitier for advice after hitting a brick wall with a similarly repugnant patient, Poitier telling the story of his treatment of the Bobby Darin patient as a way of showing that even the worst patients are treatable.

This is quite a different Sidney Poitier than you might be used to. Wearing suit and tie, and spectacles, this is a more restrained, measured performance. Poitier’s taboo-busting Oscar nomination for The Defiant Ones had not progressed his career that much, still restricted to starring roles in low-budget pictures. But Kramer broke another taboo in Poitier’s favor with this one, casting him a role not initially written as an African American.

Bobby Darin (Come September, 1961) had parlayed his status as hit recording artist into a burgeoning movie career but does not quite display the menace necessary for a fully-fledged psycho. The likes of Richard Widmark would have been a more convincing adversary. Peter Falk (Machine Gun McCain, 1969) has a small one-tone role. The jazz-nuanced music by Ernest Gold (Exodus, 1961) is worth a listen. And if someone can tell me who designed the striking credit sequence I would be very pleased.

Incidentally, the title of Lindner’s short story is ironic. Patients pay for one hour of a psychiatrist’s time but in reality only receive 50 minutes in order for the professional to achieve a swift turnaround and keep his/her appointment timetable scheduled to the hour. Tic-Tac-Toe, in case you are unfamiliar with this two-person childhood game, consists of drawing lines to create nine squares and filling those with either a zero or a cross. The object of the exercise is to create a complete line of either symbols.