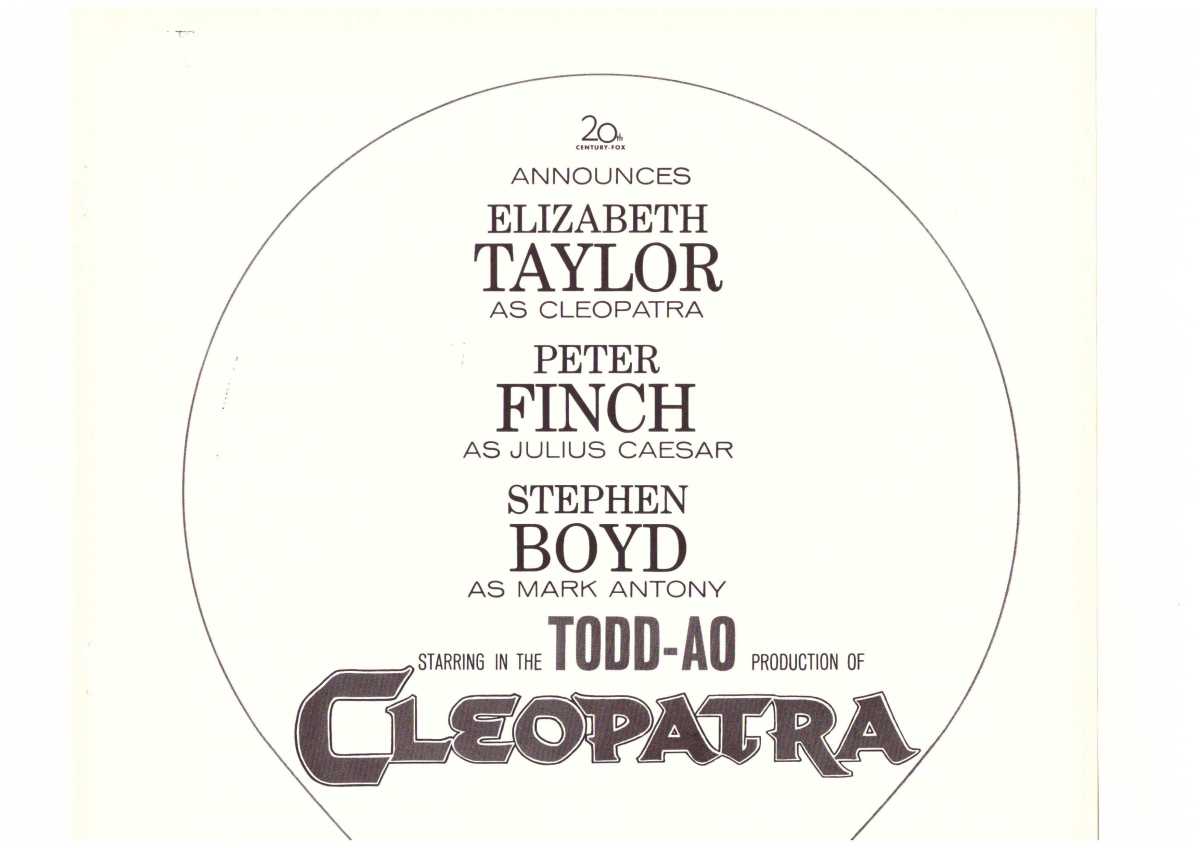 Producer Walter Wanger headed for Britain to oversee the start of production for Twentieth Century Fox’s Cleopatra. Before the movie was bogged down in illness and budget scandals, Elizabeth Taylor’s co-stars in this initial version were Stephen Boyd, fresh from Ben-Hur, and Peter Finch.  Wanger was mulling over taking the production to Egypt where he also intended to film the adaptation of Lawrence Durrell’s Justine. Rouben Mamoulian was the director of Cleopatra. Durrell had written the screenplay for this version. Fox was promising the movie would be on screens in June 1961. Joseph L. Mankiewicz, at this point down as writer of Justine, would later end up in charge of Cleopatra version two with Richard Burton and Rex Harrison replacing Boyd and Finch.

Although Alfred Hitchcock Festivals would become one of the major reissue talking points of the 1980s and while Rebecca (1940) had been successfully revived in the 1950s, the director’s first major commercial – as opposed to arthouse – retrospective was in the planning stage courtesy of David O. Selznick. He had in mind a rotating double bill based around three features to which he owned the rights – Spellbound (1945) with Ingrid Bergman and Gregory Peck, Notorious (1946) with Bergman and Cary Grant and The Paradine Case (1947) with Peck and Ann Todd. The project would be marketed as an “Alfred Hitchcock Festival.” Interest in the director was at all-time high after the double whammy of the previous year’s North by Northwest and current box office sensation Psycho. The fact that all three movies had already been shown on television was not seen as a deterrent. Selznick aimed to use as a promotional tool that moviegoers could see the pictures without irritating commercial breaks and on a much larger screen than television would afford.

Montezuma was scheduled as Kirk Douglas’s follow-up to Spartacus with a budget in excess of the $12 million spent on the slave revolt epic. John Huston would pen the script and director. Douglas would play Cortez with Marlon Brando being wooed for the title role… Darryl F. Zanuck was setting up The Day Christ Died based on the Jim bishop bestseller in competition to George Stevens’ planned The Greatest Story Ever Told… Steve McQueen was planning to make The Captain under his own production company with Henry Fonda and Ernest Borgnine playing major parts… In fact, only The Day Christ Died ever saw light of day and  then only as a television film in 1980.

Critic Bosley Crowther declared war on subtitles, an unusual move for a writer long considered a purist where foreign movies were concerned…Pope John XXIII ordered a permanent projection room with air conditioning to be installed in the Vatican on the third floor of the Apostolic Palace because he liked movies more than his predecessor…La Dolce Vita was the top grossing film of the 1959-1960 Italian season with $1.125 million, well ahead of the closest runner-up Some Like it Hot with $725,000…Universal ordered a record fifty 70mm prints for Spartacus…Charlton Heston was announced as El Cid for the forthcoming Samuel Bronston production…John Wayne held a sneak preview of The Alamo at the 900-seat Aladdin theater in Denver on August 5 with Can-Can kicked off the screen for the night…U.S. movie receipts were up for the first time in five years with the week of July 30 1960  the best since August 4 1956…In Britain, Hercules broke records in 36 of the 39 cinemas in its initial playoff.