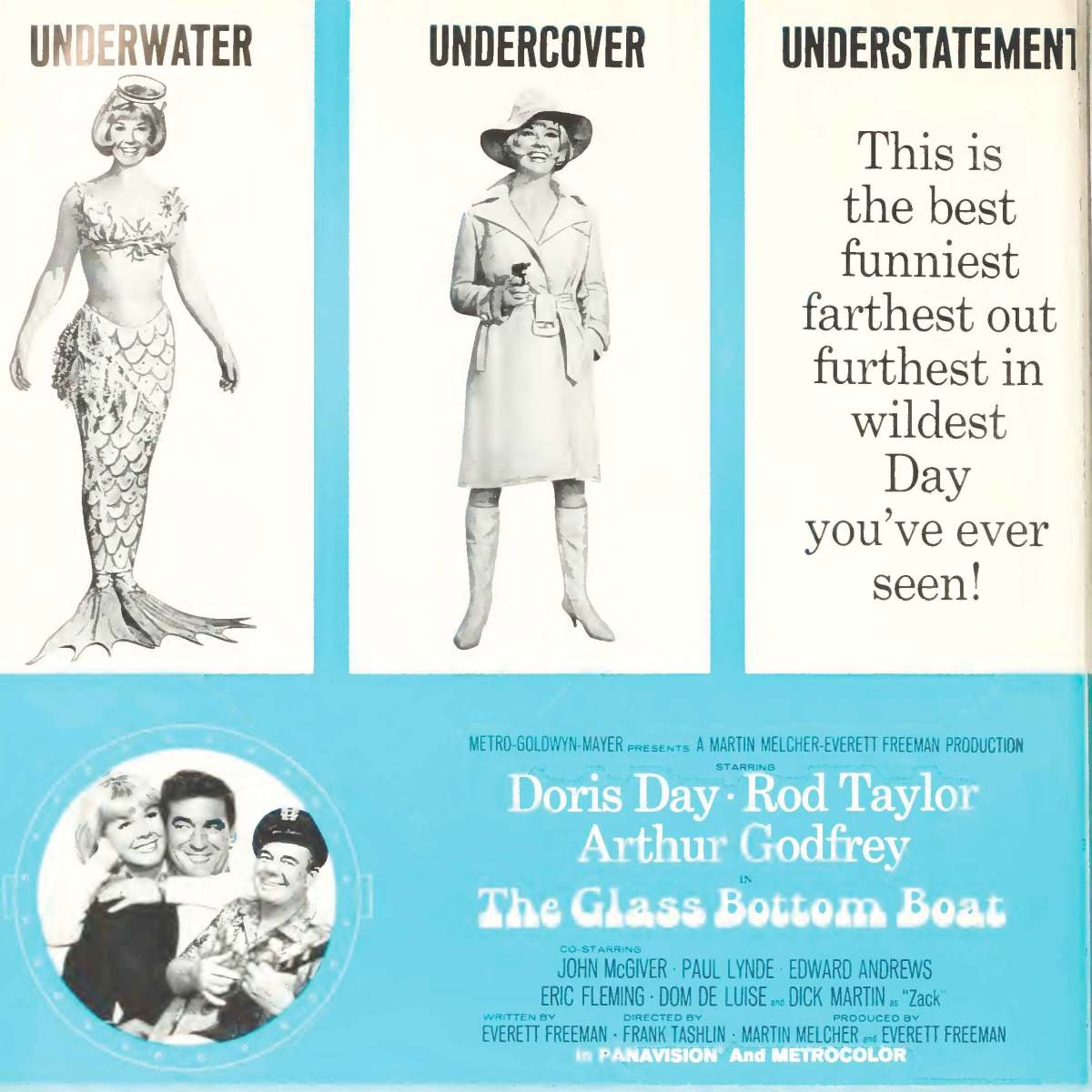 I’ve never gone out of my way to watch a Doris Day picture with the exception of musical Calamity Jane (1953) when it became a camp classic as well as Hitchcock’s The Man Who Knew Too Much (1956) and films where she happened to be co-starring with Cary Grant.

So I came to The Glass Bottom Boat with low expectations, especially as this was towards the end of her two-decade career and co-star Rod Taylor was a different level of star to Grant and Rock Hudson. By now, she had dropped the musical and dramatic string to her bow and concentrated on churning out romantic comedies and also been supplanted by Julie Andrews as Hollywood’s favourite cute star.

But on the evidence here I can certainly see her attraction. This is entertaining enough. And she sings – the theme song, one other and a riff on one of her most famous tunes “Que Sera Sera.” Unless there’s a symbolism I’ve missed, the title is misleading since the boat only appears in the opening section to perform the obligatory meet-cute with Taylor as a fishermen hooking Day’s mermaid costume.

The plot is on the preposterous side, Day suspected as a spy infiltrating Taylor’s aerospace research operation. It’s partly a James Bond spoof – when her dog is called Vladimir you can see where the movie is headed – with all sorts of crazy gadgets. But mostly the plot serves to illustrate Day’s substantial gifts as a comedienne. For an actress at the top of her game, she is never worried about looking foolish.

And that’s part of her appeal. She may look sophisticated even when, as here, playing an ordinary public relations girl, but turns clumsy and uncoordinated at the first scent of comedic opportunity. There’s some decent slapstick and pratfalls and some pretty good visual gags especially the one involving a soda water siphon. A chase scene is particularly inventive and there’s a runaway boat that pays dividends. But there are a couple of effective dramatic moments too, emotional beats, when the romance untangles.

She’s in safe hands, director Frank Tashlin responsible for Son of Paleface (1952) and The Girl Can’t Help It (1956). I also felt Taylor was both under-rated and under-used, never given much to do onscreen except stick out a chiseled jaw and turn on the charm. Although he had been Day’s sparring partner in her previous picture Do Not Disturb (1965) he’s not in the Cary Grant-Rock Hudson league.

It’s also worth remembering that the actress had her own production company, Arwin, which put together over a dozen of her pictures, including this one, so she would be playing to her strengths rather than those of her co-star. On the bonus side, watch out for a blink-and-you-miss-it cameo by Robert Vaughn (The Man from Uncle), a featured role by Dom DeLuise as a bumbling spy and, in a bit part as a neighbour, silent screen comedienne Mabel Normand.