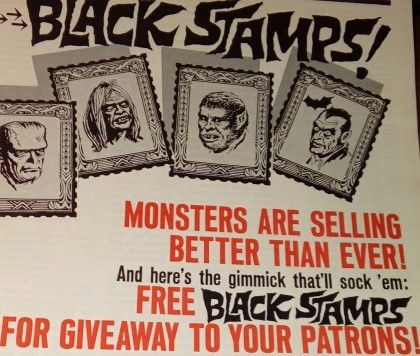 You might be tempted to fork out for the range of James Bond Commemorative Stamps being brought out to celebrate No Time to Die when it eventually sees the light of day on movie screens.

But stamps either as collector’s items or for trading purposes have been around since the silent era.  A line of movie commemorative stamps issued in America in 1944 sold 1.1 million first day covers, the second highest-ever at the time, and in the late 1950s Movie Stamps Inc set up a business that worked in the same way as the Green Stamps given away in supermarkets and gas stations. In this system, if you collected enough you won a gift, usually, in regards to the movie business, a couple of free tickets.

So Columbia Pictures looking for a way to sell its Hammer double bill The Gorgon (1964) with Christopher Lee and Peter Cushing and The Curse of the Mummy’s Tomb (1964) starring the lesser-known Terence Morgan revived the idea.

Horror specialist Hammer was one of the British film studios going through a production boom – over 100 movies were being made in that country in that year – with The Secret of Blood Island (1965) in the works for Universal and She for MGM. But horror was still a difficult sell and Hammer had ignored the advice of Variety that The Gorgon would work best if teamed with “a lively comedy.”

American International had expanded the horror market away from the Frankenstein/Dracula axis by exploiting the Edgar Allan Poe back catalog and William Castle had achieved some success in modern tales of terror such as Dementia 13 (1963) and The Night Stalker (1964). But Castle could call upon the likes of Barbara Stanwyck and Robert Taylor, players with substantial marquee status despite their lately diminished careers, for radio and television interviews.

For Hammer the obvious exploitation options were limited to a spread in the quarterly Castle of Frankenstein magazine which could be purchased for 35 cents at newsstands.

So the marketing honchos dusted off the old movie stamps idea. In some advertisements, the studio offered free stamps to the first 10,000 ticket-buyers but in the advertisement shown above they appeared to be given away free to everyone. The faces of the various monsters and characters featured in both films were imprinted on the stamps. However, on the debit side, there was no sign of any redemption for the collected cards. You couldn’t, should you be so inclined, collect ten and get a guest ticket in return. You could probably trade them and build up a collection. I’m not sure they did much for the movie judging by the box office accounts that exist but if anyone remembers seeing them or collecting them let me know. 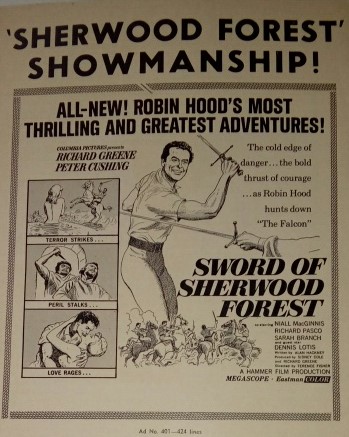 Studios did not always trust movie theater managers to glance at the Pressbooks posted out to them, one of the initial functions of such marketing manuals being to tempt said managers into booking the film in the first place. So studios occasionally chose a more direct route of getting in a manager’s face and would lump the whole Pressbook into an American trade magazine. Sword of Sherwood Forest took this route.

The film was a very speedy attempt by British studio Hammer to cash in on the popularity of The Adventures of Robin Hood television series, especially by hiring its star Richard Greene. It was a bit of an uphill struggle, movie swashbucklers long out of fashion. In fact, it was only the British television industry that kept the genre alive, in the second half of the 1950s pumping out such series as The Buccaneeers, The Adventures of Sir Lancelot, Sword of Freedom and The Adventures of William Tell. The 30-minute Robin Hood series ran in Britain on ITV in 1955-1959 and was picked up by CBS in 1958

This Presbook was a fold-out, the initial A4 sheets pulling out to form a giant A2 sheet. Hammer was relying on the fact that by the time the movie appeared in America, the series was being shown on various television stations. Some of the marketing ideas were straightforward enough such as utilizing toy stores that would likely have swords and archery sets among its inventory and it would be easy enough to sent a promotional girl or man down a main street decked out in tights and leather jerkin.

But it was a bit of a long shot to expect a theater manager in a small town to host a fencing tournament. The stars were little help – Richard Greene had virtually no marquee value not having made a picture in five years until  his television success prompted Cold War thriller Beyond the Curtain (1960) but that was British-made with little American penetration. The public might be more familiar with bad guy Peter Cushing after his interpretation of Sherlock Holmes in The Hound of the Baskervilles (1959) and horror pictures The Brides of Dracula (1960) and The Revenge of Frankenstein (1958).

There might have been some mileage out of newcomer Sarah Branch as Maid Marian but she did not feature at all in the Pressbook. The marketeers appeared to be relying solely on the popularity of the Robin Hood legend and perhaps audience familiarity with old Errol Flynn pictures that popped up with regularity on television channels because, unusually for a piece of material that was meant to sell a picture to theater managers, this made remarkably little impact as a marketing tool beyond the fact that it was unavoidable in the middle of a weekly trade magazine.