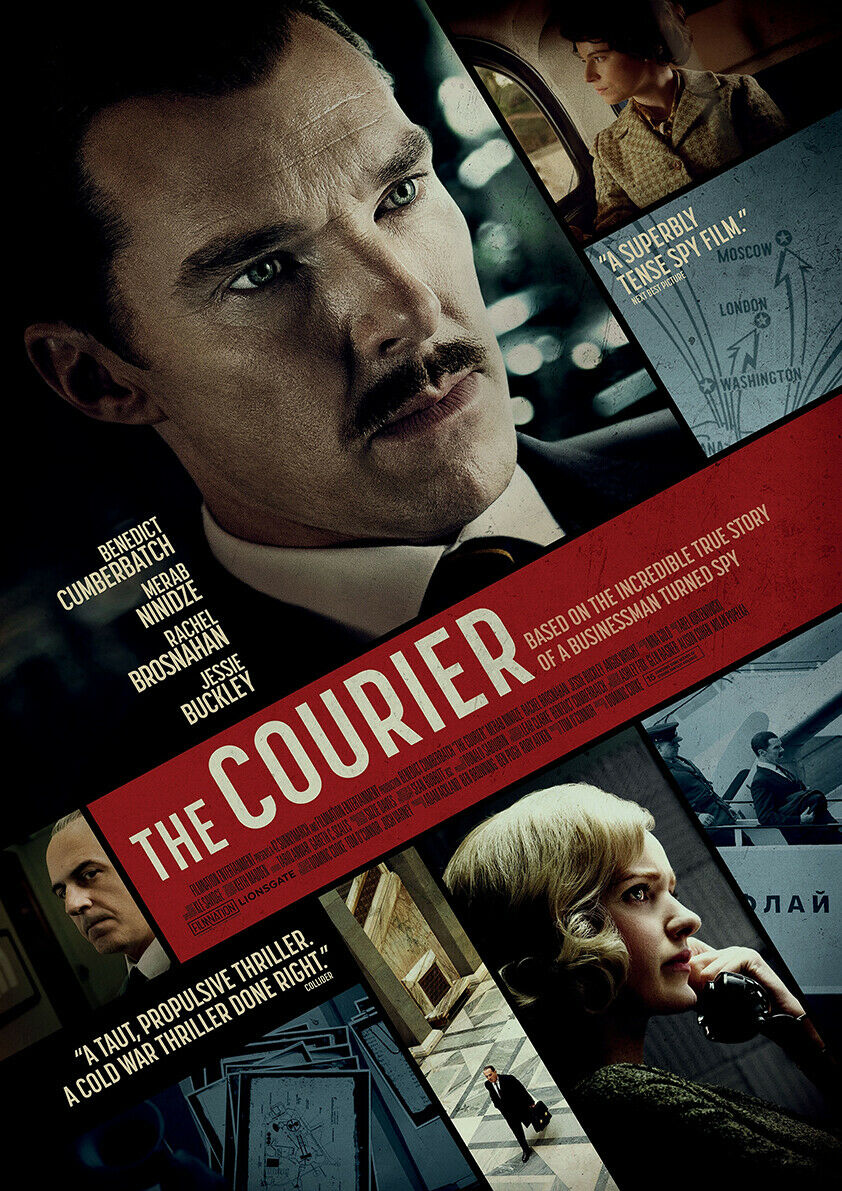 A brilliant example of how to control your material, this low-budget old school espionage picture, virtually a two-hander, based on a true story and set against the 1960s cold War paranoia, delivers thrills against the background of a murky business. Smarmy businessman Greville Wynne (Benedict Cumberbatch) is inveigled into picking up rolls of film from Russian intelligence office Oleg (Merab Ninidze), giving away his country’s secrets in a bid to prevent nuclear war.

An anti-James Bond scenario sees Wynn employing little bits of tradecraft and spending almost every minute fearing capture while he develops a friendship with his foreign counterpart. On the domestic front, the pressure tells on Wynn, already a nervy character and relying too much on alcohol to sustain his own possibly failing business. Wife Sheila (Jessie Buckley) suspects he is engaging in another extra marital affair. Doting father Oleg wilts under the burden of betrayal, hoping that his assistance in the Western cause will lead to a successful defection, aware of the impact on his family if caught.

In the background Wynne’s ruthless handlers, Dickie Franks (Angus Wright) representing MI6 and CIA operative Emily (Rachel Brosnahan), are like circling sharks. While tense enough, this is all straightforward Tinker, Tailor… territory but in the second act the stakes suddenly rise and the movie shoots into quite different, far more realistic territory, that takes its toll on both protagonists.

It’s a very lean film and in concentrating on character rather than extraneous thrills in the manner of other recent offerings like Stillwater, The Night House or Censor, comes up triumphant in terms of plot. And without attempting to impose background through artistry as with Censor perfectly captures the mood of the times. The background characters are all well developed but the unexpected friendship that develops between the two spies and leads to the climax is exceptionally well done.

Oscar nominated Benedict Cumberbatch (The Imitation Game, 2014) drops all his mannerisms to bring alive a fascinating character who has, in any case, in his business life, had to develop an alien persona.  Merab Ninidze (Jupiter’s Moon, 2017) is every bit his equal, living a lie, trying to keep one step ahead of his own suspicious compatriots. Rachel Brosnahan (Change in the Air, 2018) is excellent as the one backroom character with an ounce of empathy and a pithy line in dealing with stuffy Brits and Jessie Buckley (Wild Rose, 2018), adding another decent accent to her collection, adds some pathos.

Director Dominic Cooke (On Chesil Beach, 2017) does an excellent job of marshalling his material and his concentration on character pays off in spades. Versatility could find no better expression than through writer Tom O’Connor who went down a completely different route in his previous movie The Hitman’s Bodyguard (2017).

I do have one slight niggle. When the British were outraged at Burgess, Philby and MacLean and the Americans Klaus Fuchs et al, the arguments given by these various traitors was that, in giving away state secrets, they were merely realigning the nuclear status quo. These characters were all roundly vilified, but not Oleg here. And although the film concentrates on a few exchanges between Oleg and his courier, in reality more than 5,000 military secrets went from Russia to Britain in this fashion.