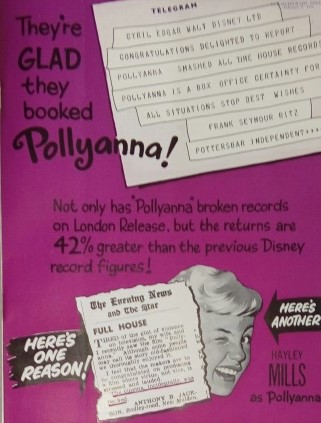 This Walt Disney version discarded much of Eleanor H. Porter’s original best seller not to mention a great deal of the tear-jerking section that played to superstar Mary Pickford’s strengths in the silent 1920 adaptation. Pickford was in her late 20s at the time and a movie mogul to boot (having launched United Artists) so had a depth of emotion Hayley Mills (aged 13 during filming) could not hope to match.

The screenplay is a good lesson in how to retain the essential element of a story – a positive-thinking orphan alleviates the gloom in an embittered town – while providing more for adult audiences. Disney assembled an awesome cast with three Oscar-winners – Jane Wyman (Best Actress, Johnny Belinda, 1948),  Karl Malden (Best Supporting Actor, A Streetcar Named Desire, 1952) and Donald Crisp (Best Supporting Actor, How Green Was My Valley, 1942) – plus four-time nominee Agnes Moorehead and Adolph Menjou.

Despite no Oscar recognition Nancy Olsen had been leading lady to the likes of Bing Crosby, John Wayne and William Holden. In effect, parents would be very familiar with the stellar supporting cast. Unusually for a kid’s picture, Wyman, Malden and Crisp each are given a reflective moment to prove they are doing more than taking an easy salary cheque.

At least in Hollywood terms (Mills made her debut the year before in the British Tiger Bay, 1959) Pollyanna falls into the a-star-is-born category. The actress acquits herself well, with her expressive face, while hearing the emotion she packs into the word “gorgeous” is word admission alone. With a healthy subplot about a town in thrall to matriarch Wyman, the weight of the movie does not fall on Mills’ shoulders alone and fire-and-brimstone preacher Malden and faded spinster Wyman are particularly good; Malden especially allocated more screen time than would be normal in a movie aimed at kids.

I have never read the book nor (to my shame) seen the Pickford version, so I came to the movie with low expectations, anticipating a lazy, maudlin effort. So I was quite surprised to discover how much I enjoyed it and was shocked by the final piece of action which turned the movie on its head. Sure, it relies on the feelgood factor but there is some decent stuff here – Pollyanna’s determination to find goodness in every event and every person takes her into some strange avenues – the rainbow playing on the walls, the “good parts” of the Bible – that these days makes for an entertaining matinee.