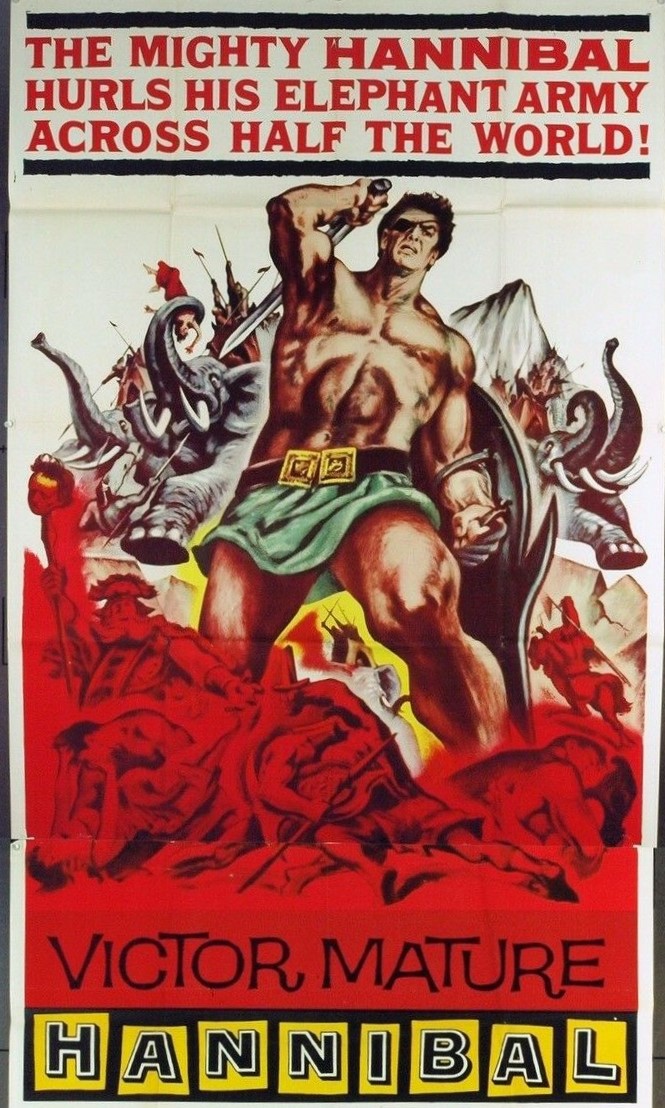 Inconvenient truth never bothered Hollywood scriptwriters when it came to history and here the prospect of solving the “Great Hannibal Mystery” proved irresistible. For in 218 B.C. this invader from Carthage (modern-day Tunisia) had crossed the Alps, battered the Roman army into submission and had Rome at his mercy. But one of the greatest generals of all time did not attack Rome. Why? Love was the answer, according to the filmmakers, following the Romeo and Juliet template.

I have to admit I didn’t have that on my mind. I was seduced by the poster, the involvement of cult director Edgar G. Ulmer (The Black Cat, 1934), the prospect of an action-packed adventure with marauding elephants and the fact that although familiar with the name Hannibal I had no idea who he was and why he crossed the Alps when surely it would have easier to take a ship from Tunisia to Italy. But I guess star Victor Mature (Samson and Delilah, 1949) was also duped into thinking that if an American nobody like Steve Reeves (Hercules, 1958) could make it big in Italy then so could surely the original Hollywood Mr. Muscles. Mixing the new-look sword-and-sandals genre with the old-style historical epic appeared a potential winner. But I should have guessed that the lean running time of 103 minutes meant an “epic” was out of the question.

The picture does take a good while to warm up although the movie begins with a sense of the epic, otherwise how to explain the 15 minutes before Hannibal hoves into view, the preceding period of invaders crossing the Alps short of dramatic incident beyond a couple of men falling to their deaths and the elephants becoming a bit restive. Endless lines of soldiers, in this case stretching into the snowbound horizon, almost becomes a motif, too much valuable time wasted on too many marches.

Hannibal turns out to be a clever commander, wanting to conquer Rome more by fear than battle, reckoning that if the Italians believed he possessed an unstoppable force they would rush to the negotiating table rather than engage in open battle and risk the destruction of their cities. He sends the captured niece Sylvia (Rita Gam) of Senator Fabius (Gabriele Ferzetti) back to her uncle with frightening tales. This doesn’t fool Fabius who views the woman as a traitor and realizes the pitfalls of surrender. Hannibal and Sylvia getting it together causes discord not just in Rome but in the Carthaginian camp, the delay in attacking the city put down to their romantic dalliance.

The initial battle scenes come up short, presented primarily in montage, little snippets of fighting here and there, rather than opposing forces facing each other, no sign either of elephants striking terror into the hearts of their opponents. But the later battle more than recompenses. One of the greatest assets of historical and war pictures is the detail given over to strategy. And if filmed properly, you can see plans executed. Hannibal demonstrates his genius by drawing the main Roman phalanxes into a trap, attacking them from both sides and forcing them back towards a river from which there is no escape. Superbly filmed, it’s a bloody conflict (for movies of the period), arms hacked off, faces and bodies weeping with blood. There’s a tragic end to the romance.

I should point out, having done my own digging, but there was a sounder reason than love for Hannibal not advancing on Rome. Simply put, he lacked the machinery to do it. The only way to conquer a city was by siege and to achieve that you needed siege machines which Hannibal lacked. But no matter how much he later tried to draw the Roman armies into the open, he was denied that opportunity by the wily Fabius who, instead, waged a war of attrition.

Hannibal was, in fact, an irritant to Rome for a decade, so this tale is heavily truncated. Although the tale of the strong man brought to his knees by passion is a Hollywood trope – look no further than Samson and Delilah – the lovers fail to strike the necessary sparks, in part because initially Hannibal views Sylvia merely as a tool to achieve a political end and in part because their time together is too limited. This is no grand passion in the vein of Doctor Zhivago (1965).

And that’s a shame because despite (or perhaps because of) his muscles, Victor Mature was no slouch in the romantic sweepstakes, having dallied in the past with the like of Janet Leigh (Safari, 1956), Susan Hayward (Demetrius and the Gladiators, 1954) and Jane Russell (Las Vegas Story, 1952). Here, Mature is better as a leader than a lover. The svelte Rita Gam (The Thief, 1952) – first wife of director Sidney Lumet –  was the opposite of the more voluptuous Italian screen queens of the Sophia Loren/Gina Lollobrigida variety and her career had not really taken off, only eight films prior to Hannibal and only two in the next decade. Paradoxically, she is better battling her uncle and accepting her fate than a woman in the grip of passion.

Gabriele Ferzetti (Once Upon a Time in the West, 1968) makes the most of a complex character. Look out for Rik Battaglia (Sodom and Gomorrah, 1962) as Hannibal’s brother and, as Fabius’s son, Terence Hill (God Forgives…I Don’t, 1967) and in a smaller role his future sidekick Bud Spencer.

Directorial credit was split between Ulmer and Carlo Ludovico Bragaglia  (Amazons of Rome, 1961) with Mortimer Braus (The Son of Dr Jekyll, 1951), Sandro Continenza (The Inglorious Bastards, 1978) and Ottavia Poggi (Queen of the Nile, 1961) involved in the screenplay.