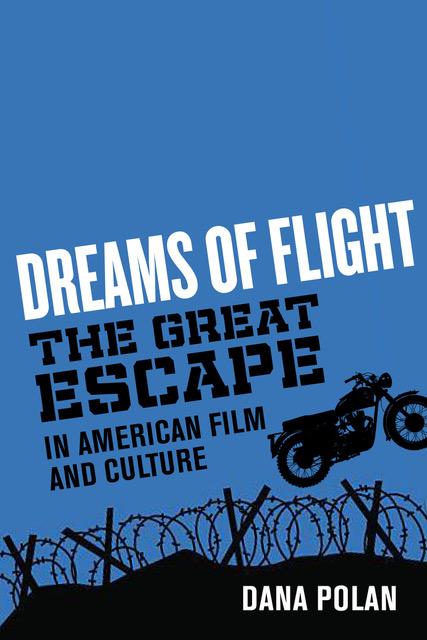 In the history of rousing action cinema few movies are as revered or have produced such a collective cinematic response as John Sturges’ World War 2 POW picture The Great Escape (1963) starring Steve McQueen, James Garner and Richard Attenborough and a host of upcoming stars including The Magnificent Seven alumni James Coburn and Charles Bronson,

Dana Polan’s rich assessment of the film’s making coupled with a superb analysis of the film itself, script, style, themes and directorial bravura is filled with informative nuggets. Eschewing the standard star bio approach, Polan goes much deeper to detail how earlier adaptations for American television and Australian radio (made by novelist Morris West’s company and with Rod Taylor as a German guard) affected the film, how it fitted into the British POW tradition (The Colditz Story etc) and the influence of an American offshoot like Stalag 17.

You might already be familiar with the work of Dana Polan since he has written books on Pulp Fiction, The Sopranos and Jane Campion and another half-dozen books besides. This is an excellent addition to his impressive portfolio.

Paul Brickhill, author of The Great Escape (and other war classics The Dam Busters and Reach for the Sky) had been an inmate at Stalag Luft III so drew on personal experience – including that of tunnel digger – and sketches made at the time of the tunnels to turn out, as co-writer, a precursor Escape to Danger. It was either interviews relating to this or a magazine article or condensation that alerted neophyte director Sturges in 1945/1946 to a potential film. The book, published in 1950, sold a million copies in paperback in the UK alone and was a huge global success. And for independent producers Mirisch, for whom Sturges later made The Magnificent Seven, buying the rights was integral to the director’s pact with that company in 1957 and indeed The Great Escape was mooted as his debut picture for them. When finally greenlit, it was intended to be shot in the U.S. with only 10 per cent taking place in Europe. That it went the other way was due to an unusual set of circumstances.

In his analysis of the picture, Polan makes other interesting connections, first of all to the caper picture where each character has a specific task to contribute to the overall effort. Unusually for a heroic film, he points out that courage is continually undercut, each uplifting moment leading to defeat, the film itself having an essentially downbeat ending, the only true victory found in defiance. And in some respects The Great Escape created a bridge between the gung-ho war films of the 1950s and the more cynical approach to war envisioned in The Deer Hunter and Apocalypse Now.

Being British, it had never occurred to me how important the baseball glove was to American culture, the glove representing for many a “certain brand of American problem-solving in the face of adversity” although far more universally accepted would be the premise of the motorcycle escape representing the triumph of the spirit even as it results in a more down to earth resolution.

Tracing Sturges’ stylistic development back to post-WW2 B-movies made for Columbia explains the importance of the trademark parabolic shot in driving action forward. Yet for all his stylistic bravura, Sturges was very grounded when it came to the work required to make pictures, for example here adopting coloured index cards to shuffle around pieces of action to best effect.

The script went through various hands – William Roberts and Walter Newman, both integral to The Magnificent Seven, but was finally credited to crime writer W.R. Burnett (who had worked with Sturges on Sergeants 3, 1962) and James Clavell (who adapted The Satan Bug, 1965), himself a POW in a Japanese camp with British writer Ivan Moffat (Giant, 1956) coming in at the last minute as script doctor. A breakdown of the various scripts attributes the Hilts’ cooler baseball bouncing to Moffat who also wrote the scene that changed Hilts from loner to participant.

In a terrific appendix you can discover exactly the problems facing the real escapees and who came up with the book title (clue – not the author) four years after the idea originally surfaced. There’s a fascinating coda about the film’s impact on Hollywood and general culture and Polan takes time out to reflect on the experience of various fans on their virgin encounter with the picture. The movie was a big hit and so well received that when critic Bosley Crowther wrote a negative review the “New York Times” postbag was filled with complaints. Written with tremendous authority and great style, this is one book you would want to find in your Xmas stocking.

Dreams of Flight: The Great Escape in American Film and Culture by Dana Polan is published by University of California Press at $24.95 / £20 in both paperback & ebook.  ISBN 9780520379305. It is available on Amazon and Kindle.

2 thoughts on “Book Review – Dreams of Flight: “The Great Escape” in American Film and Culture”