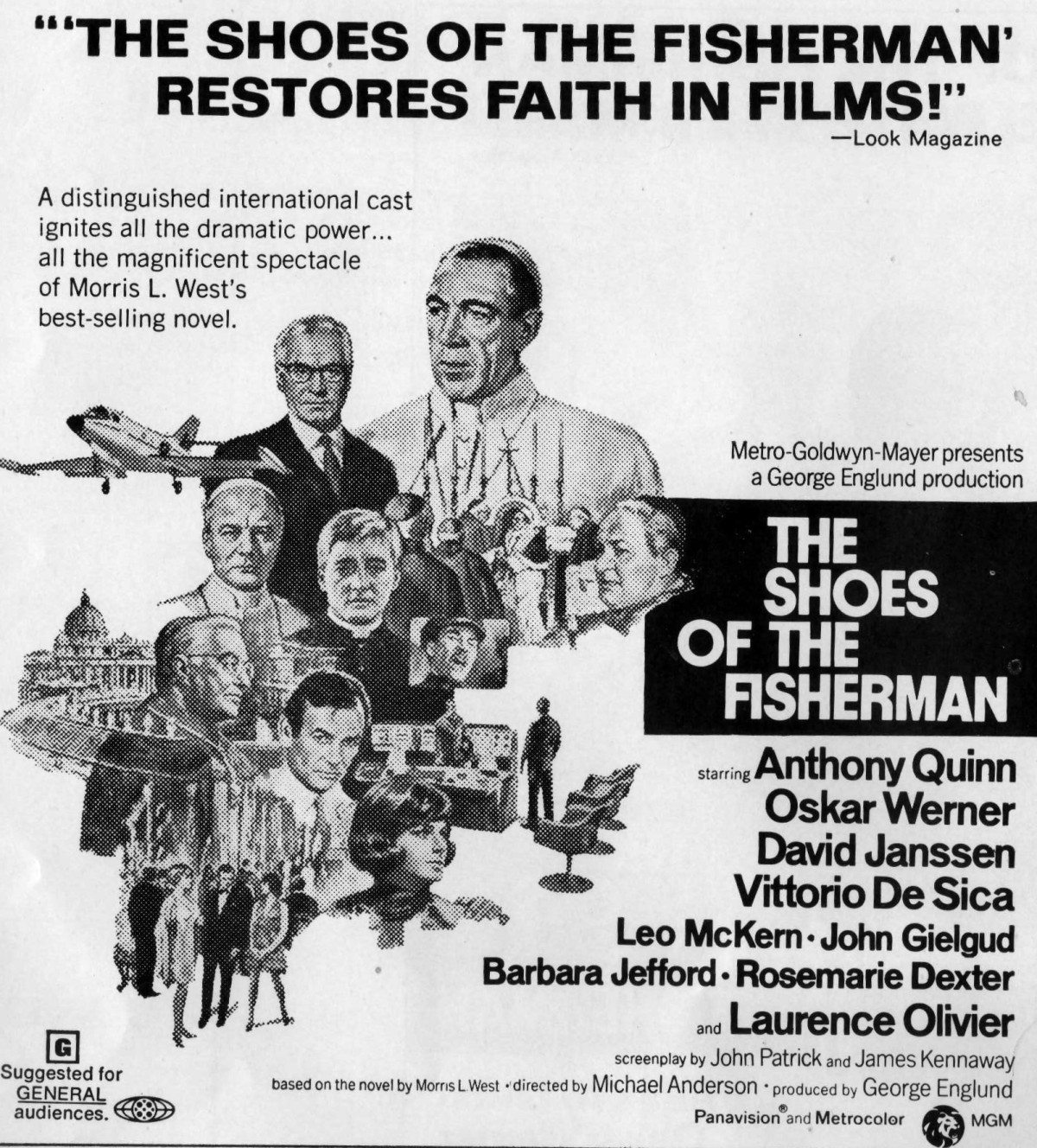 The Pressbook for The Shoes of the Fisherman is almost reverential in approach. For a start there is a complete lack of the madcap schemes designed by marketing men to promote the picture to the exhibitor. Nor is there any mention of the tie-ins that did exist – the book had sold seven million copies and the soundtrack by Alex North was already being acclaimed – it would be nominated for an Oscar. And there are very few of the titbits that might appeal to a local journalist.

There is only one piece of artwork, although a truncated version provides a secondary opportunity for advertising and combined with a scene from the film material for a third ad. Taglines are equally scarce. “A distinguished international cast ignites all the dramatic power…all the magnificent spectacle of Morris L. West’s best-selling novel” is all there is apart from a puff from Look magazine puff that espouses “The Shoes of the Fisherman restores faith in films.”

The better tagline, in the sense that it sold an actual story rather than promoted the ingredients, was: “A modern-day story that reaches from the shadows of the Kremlin to the splendor of the Vatican.” One further tagline gave away more of the plot: “In a last desperate attempt to prevent World War III, a secret meeting is arranged. One man is called upon to succeed where all the world leaders have failed. That man was once a prisoner in a Russian labour camp. He is now the Pope.”

The sets were of the no-expense-spared variety. Barred from using the Vatican itself, the producers used a mixture of real locations and sets at Italian studio Cinecitta to create the necessary backdrops. The Sistine Chapel set measured 133 feet by 45 feet and the paintings that dominate the altar including “The Last Supper” were copied in Hollywood and transported piece by piece. This set actually functioned and was accurate down to the tiniest detail. The only major touch omitted from the sets was the steps leading to the altar, since that would have necessitated cumbersome ramps to track the movement of the cardinals as they cast their votes.

Oher buildings were appropriated for modern scenes – the Palazzo dello Sport for the secret peace conference. Cardinals arriving to vote were filmed at Fiumicino airport and Stazione Termini railroad station. Other locations included the Palazzo Farnese at Capranola used for scenes of the breaking of the old Pope’s seals, the Church of San Andrea della Valle for the interior of St Peter’s for the papal coronation, and Castello San Angleo, Biblioteca Vallicelliani and Palazzo Barberini.

Incidental information, the kind that journalists could use to augment their material, was scant. Author Morris L. West had once been a monk; bit part actor Clive Revill had been knifed in his previous film by Burt Kwouk; stage actress Barbara Jefford was appearing in only her third film and her role as a cerebral wife was in stark contract to her debut as the sensual Molly Bloom in Ulysses (1967); small-screen star David Janssen of The Fugitive played a small-screen reporter; and Oskar Werner had turned down over a 100 screen roles if they interfered with his commitment to the stage.