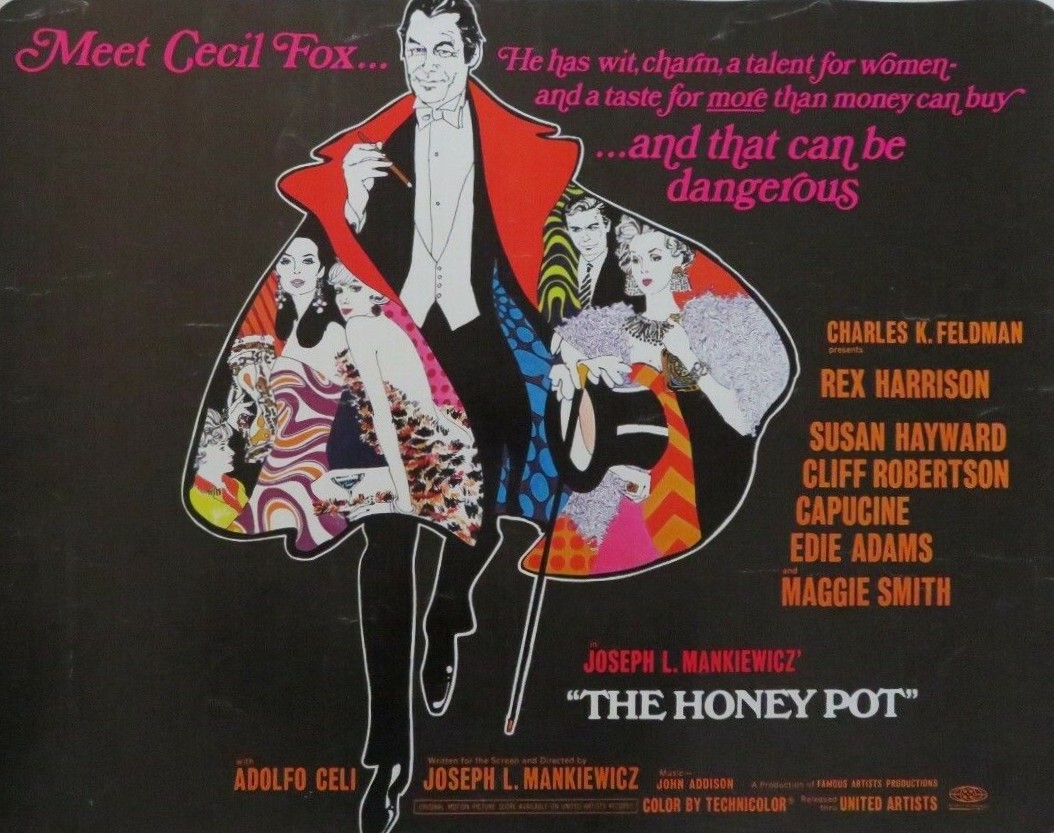 Shave 20-30 minutes from this and you would have had a taut thriller. You could start with the number of clever dicks who happen to notice that what’s going on bears a close resemblance to a play Volpone by Shakespeare contemporary Ben Johnson, even down to the anglicizing of the names of those fictional characters. And prune the number of detectives, three is two too many especially when there’s an actual genuine detective in the mix. And the shock ending is just…well…mince.

Otherwise, quite fun in a way. Wealthy Cecil Fox (Rex Harrison) hires sometime actor, sometime factotum, law graduate Marty McFly – oops William McFly – to help him pull off an elaborate joke, “people-baiting”, a modern version of “bear-beating” apparently. Fox pretends to be dying in order to bring three former lovers, all he presumes desperate to be named in his will, to his bedside in a grand palazzo in Venice. Upfront reason, some kind of revenge. Hidden reason, something darker obviously.

The trio are Texan Mrs Sheridan (Susan Hayward), movie star Merle (Edie Adams) and Princess Dominique (Capucine). Sheridan is accompanied by a nurse Sarah (Maggie Smith), the “voice of morality.” They all certainly seem to have a sense of humor. Two presenting Fox with gifts of clocks, the princess with an hour-glass filled with gold dust instead of sand, presumably with the notion that he can watch his life ticking away. Needless to say, this is like an reality TV show, Fox not having named an heir in his will, so they are all battling to be the heir, and as he points out, even the rich will succumb because there is no such thing as “enough money.”

Things do not go according to plan when Sheridan unexpectedly dies. Enter Inspector Rizzo (Adolfo Celi). Sarah suspects McFly because he used her as an alibi but disappeared for a time when she (for unexplained reasons) fell asleep in a posh restaurant (and nobody tried to wake her). Turning detective herself, she comes up with “proof positive.” Turns out the two remaining suspects had conspired to also give themselves an alibi, easily demolished by the kindly inspector. McFly, too, has been doing some digging.

But then comes another twist and everything you thought you knew flies out the window. Cue more investigation, more alibis and finally an Agatha Christie pay-off when the two amateur detectives and the real one confront everyone in the drawing room. By which time the twists are coming thick and fast.

Best thing about this is the playing. Although decidedly stagey, very little in the way of visual audacity, that works to the movie’s benefit, and not a bad choice to rely so heavily on the acting given the cast. With the exception of Edie Adams, Capucine and Celi, all were Oscar anointed. Two winners – Rex Harrison for My Fair Lady (1964) and Susan Hayward for I Want to Live (1958) – and between them another five nominations – and two future winners in Cliff Robertson for Charly (1968) and Maggie Smith for The Prime of Miss Jean Brodie (1969). The others were not out of their depth, Edie Adams (Made in Paris, 1966) clocking up Emmy nominations. Adolfo Celi (In Search of Gregory, 1969) a deuce of nominations from the Cannes Film Festival while even Capucine (The 7th Dawn, 1964) had been nominated for a Golden Globe.

So director Joseph L. Mankiewicz (Cleopatra, 1964) makes the right decision to let his actors get on with. Rex Harrison is at his suave best, but with a malevolent undercurrent, and has most of the best – and zestiest – lines. Robertson, usually the hero, is sly and duplicitous. Susan Hayward was in her comfort zone, forthright and taking no prisoners, Capucine at her cold and haughty best. Smith and Celi were the revelations, the former losing the trademark drawl and the nurse’s mousiness as to some extent she exerts control, and Celi departing from the bombast and delivering a lower-keyed performance.

Doing double duty, Mankiewicz worked up the script from three sources: the original Volpone,  the play Mr Fox of Venice by Frederick Knott (Dial M for Murder) and a novel The Evil of the Day by Thomas Sterling. Next time the director went to the stage for inspiration he chose a better source for a mystery – Sleuth (1972).

Calling this a by-the-numbers spy thriller does this movie no disservice since numbers are crucial to the complicated plot. On the one hand it’s quite a simple set up. Suave high-living art-dealer-cum-spy Michael London (Gene Barry) travels from Paris to Istanbul on the Orient Express to bid for secret papers in a secret auction. The complication: he must pick up the auction money from a bank in Istanbul using a code given to him along the way, each number by a different unknown person. On his side are train security chief Cheval (John Saxon), investigative journalist Leland McCord (Tom Simcox) and colleague Peggy (Mary Ann Mobley). Out to get him are Mila Darvos (Senta Berger) and Dr Lenz (Werner Peters).

The numbers business is an interesting addition to the usual spy picture formula of scenic location – Venice and the Eastern bloc as well as the other famous cities – violence and beautiful, sometimes deadly, women. You spend a good time guessing just how the numbers will be passed on and let me warn you it is sometime by inanimate means while the numbers themselves come with a twist. There’s also a truth serum, bomb threat, a traitor and every obstacle possible put in London’s way to prevent him completing his mission. London is about the world’s worst passenger, always missing the train as it sets off on the next leg of its journey, and requiring alternative modes of transport to catch up. But it’s as much about quick thinking as action and ends with a couple of unexpected twists. And it’s darned clever at times where the numbers are concerned.

Admittedly, the plot is a tad over-complicated but it’s fun to see London wriggle his way out of situations and for Cheval and McCord to turn up unexpectedly to provide assistance.

Gene Barry (Maroc 7, 1967) is little more than his television alter ego from Burke’s Law but he has an easy screen presence, never flustered, tough but charming and a winning way with the ladies. John Saxon (The Appaloosa, 1966) is the surprise turn, on the side of the angels rather than a villain, and equally commanding on screen, and certainly in one of his better roles. Austrian Senta Berger (Major Dundee, 1965) is not given as much screen time as you would like – a long way from being set up as the normal espionage femme fatale – but is certainly a convincing adversary.

This was only a movie if you saw it outside of the United States. There it was shown on television. But it had high production values for a television movie and director Richard Irving, who directed the television feature that introduced Columbo (Prescription Murder, 1968), keeps it moving at a healthy clip.  The numbers idea was probably a television device, allowing the opportunity for timed breaks in the action. Writers Richard Levinson and William Link were a class television act, creating Columbo, and prior to that the Jericho (1966-1967) and Mannix (1967-1975) television series.

Interestingly, Senta Berger, John Saxon, Gene Barry, Levinson/Link and Richard Irving were all at various points involved in the groundbreaking U.S. television series The Name of the Game (1968-1971).

I had not realized Istanbul Express was a made-for-TV picture until I had finished watching it and in that case found it a superior piece of television and a decent-enough riff on the spy movie. You can catch it on Amazon Prime. 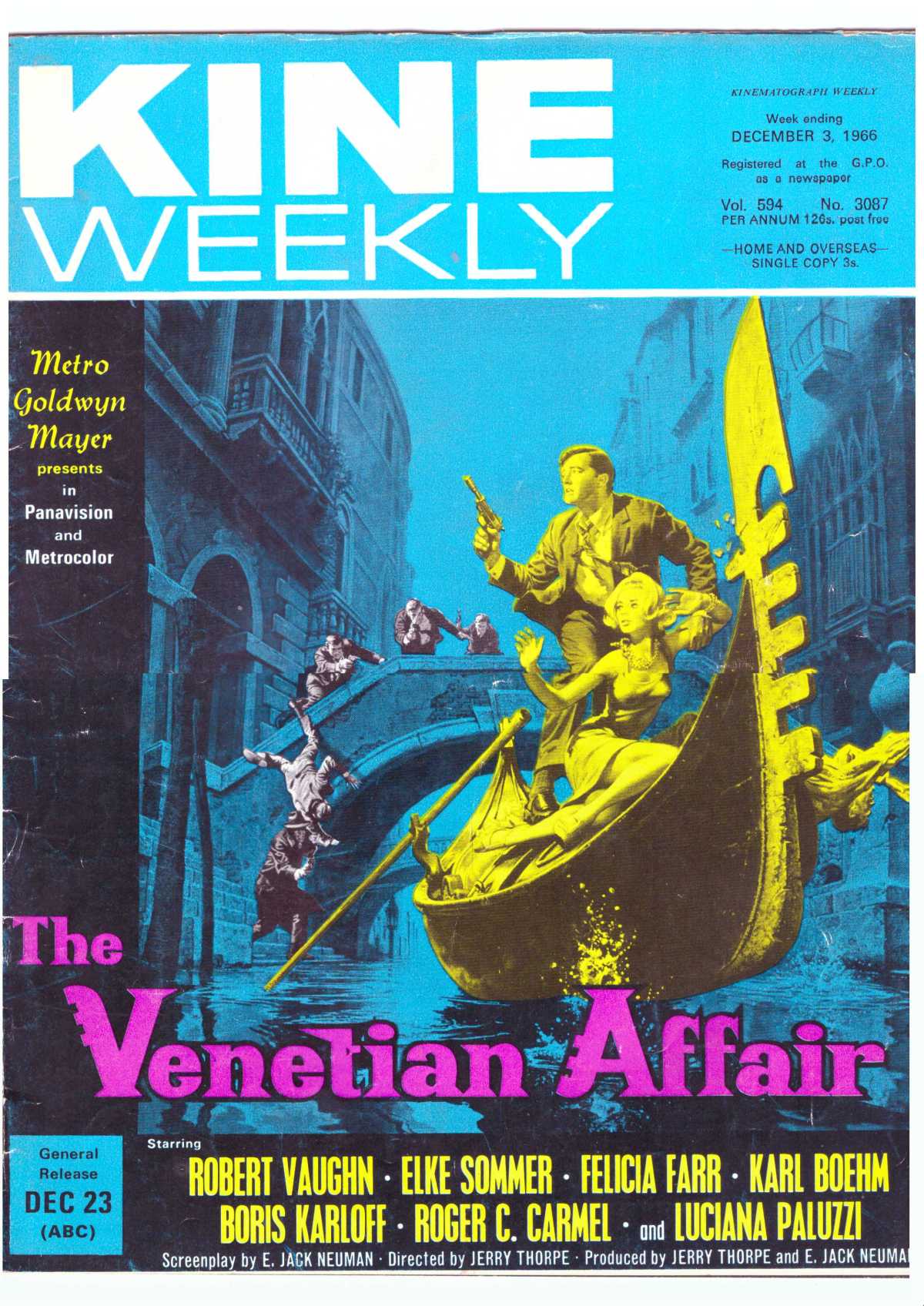 Robert Vaughn gives a terrific performance as a numbed alcoholic ex-C.I.A. journalist drafted into Venice to investigate a plot involving ex-wife and Communist defector Elke Sommer. He’s the spy who lost it rather than a flashy contemporary of James Bond. This occasionally very stylish number kicks off with an excellent credit sequence that concludes with a suicide bomber blowing up a nuclear disarmament conference. Unshaven and with a Columbo cast-off overcoat, Vaughn discovers Sommer was key to the atrocity, the bomber an otherwise distinguished diplomat with no known proclivities in the area of mass murder.

Although sold as an action picture, nobody is ripping through the canals as in a Bond film, and it is altogether a more somber, reflective, intelligent  movie. Vaughn’s feelings for his ex-wife are shown when, in her apartment, he tenderly touches her clothes and smells her perfume. Far from being party to the plot, it appears Sommer has had a change of heart and wants to defect back, leaving Vaughn in a perilous dilemma. Does he believe her or is she just using him? It is beginning to sound like a modern-day film noir, except he is already being used by the C.I.A., his presence in Venice a device to draw Sommer out, C.I.A chief Rosenfeld (Edward Asner) every bit as ruthless as the villains.

His investigations lead him to Dr Pierre Vaugiraud (Boris Karloff) and power broker Robert Wahl (Karl Boehm) who possesses a mind-altering drug that can make a man terrified of a mouse, send him into a trance and on his way to deliver savage retribution. There is death aplenty, fisticuffs and chases and Sommer, in hiding disguised as a nun, is worth waiting for.

Based on the bestseller by Scottish novelist Helen MacInnes, who outsold Alistair Maclean in her day, the project was at one point to be directed by Guy Hamilton. Coincidentally, David McCallum, Vaughn’s co-star in The Man from U.N.C.L.E. television series, was in Venice at the same time shooting Three Bites of the Apple.

Vaughn is superb in a downbeat role – shaking off his Napoleon Solo television persona- never sure if he is being duped, on the rack from falling back in love, and emerging from an alcoholic haze with a few decent ruses up his sleeve. It’s often forgotten that this is an Oscar-nominated (for The Young Philadelphians, 1959) star and that the subtlety of his performance in The Magnificent Seven (1960) is generally overlooked.

Television stalwart Jerry Thorpe making his debut contributes some interesting moments. Interpreters listening in to the conference hear the magnified ticking of the bomb moments before explosion. A sequence on a train is well done and the activity surrounding the mouse is first class. There’s a solid cast, Asner menacing even as a good guy, Karl Boehm a charismatic villain, Karloff memorable in his last performance in a non-horror picture, and interesting appearances by Felicia Farr as a C.I.A agent masquerading as the murderous diplomat’s unsuspecting mistress and Luciana Paluzzi as the girlfriend of an agent. Lalo Schifrin produces an outstanding score.

It was a flop first time round because audiences, partly duped by the title (all Uncle episodes incorporated the word “Affair” although the book, in fairness, was written long before the television series was envisioned) expected to pay to see Napoleon Solo, or something quite like him, on the big screen, with all the pizzazz and gimmickry of the small-screen show. Unfairly under-rated, this is a really satisfying thriller set against a murky Cold War background with Vaughn, trapped between love and redemption, the only character with a streak of morality.