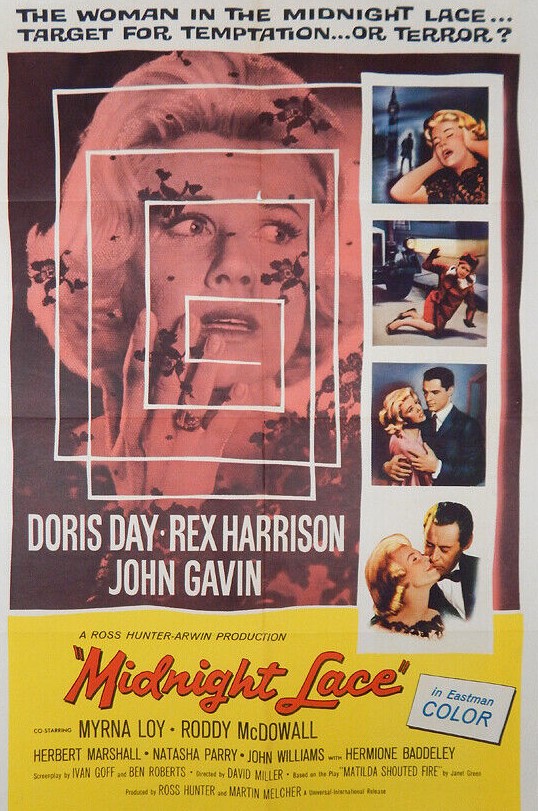 Works for the very reason that it shouldn’t – Doris Day’s off-the-scale hysteria. The actress junks her usual screen persona of spunky occasionally lovelorn heroine and channels her abundant physical energy into an exceptionally good portrayal of a woman on the verge of a nervous breakdown.

And, unlikely as it sounds, this a companion piece to David Miller’s later Lonely Are the Brave (1962),which equally presents a discordant character at odds with their surroundings whose inability to settle into the norm precipitates downfall.

Heiress Kit (Doris Day) is being hounded mainly over the telephone by a creepy stalker with a high-pitched voice, threatening to kill her. Before you can say Gaslight, you are casting a suspicious eye on millionaire businessman husband Anthony (Rex Harrison). But that only lasts for as long as it takes for a whole bunch of other suspects to hove into view.

The sinister man in black hat and coat appears too obvious a contender. Others have something off about them or appear at the wrong time and wrong place. Unemployed ne’er-do-well Malcolm (Roddy McDowell) who sponges off his mother, attempts unsuccessfully to tap Kit for funds and makes it plain he won’t be doffing his cap to her. Builder Brian (John Gavin) is over-friendly and, we overhear, makes a lot of phone calls.

And you wouldn’t count out gambler Charles (Herbert Marshall), an executive in Anthony’s firm, which, by the way, has uncovered a bit of fraud. Nor happily-married Peggy (Natasha Perry), Kit’s friend, who turns up in a bus queue the very moment Kit nearly ends up under the wheels of a London bus. And then there’s Aunt Bea (Myrna Loy) who’s arrived from America and seems determined not to take Kit’s side.

Naturally, nobody can allay Kit’s suspicions. The police are the first to suggest she’s going off her head, seeking attention because neglected by her husband.

But this is so well done, Kit jumping at the slightest noise, that you are pretty much convinced it’s going to be one of those films where every incident is imagined, especially since that would be a helluva coup to have an actress of the lightweight caliber of Doris Day to play her.

Whenever anyone else answers the phone it’s to an innocent caller. And when Kit persuades Peggy to pretend she heard the voice, discovery of that ruse appears to seal her doom.

When we’re not stuck in Kit’s head, there are sufficient tense moments to keep the plot ticking along, trapped in an elevator, shadows on a ceiling, faces glimpsed in windows, voices appearing out the fog, whispers behind her back, friends turning against her, every  police ploy a dead end.

Quite why she’s such a giddy character to begin with is never explained, except of course being a millionairess, three months married, with nothing better to do with her time than waltz around in one stunning fashionable outfit after another, life a succession of expensive treats, and whisked off her feet, when he can spare the time, by adoring hubby.

So maybe it’s something as simple as a loved-up wealthy woman finding cracks appearing in her perfect life and in trying to ascertain the cause whirling round faster and faster. There’s certainly no sense of a solid character who could sit down and give herself a good talking-to or transform herself into an amateur sleuth. When the façade breaks, it’s a dam burst.

If at the beginning Doris Day seems already too-wound-up it doesn’t really matter, her lust for life turns very quickly into abject fear as the terrorization becomes only too real. This is a fantastic performance from the actress, woefully under-rated, and the scene where she collapses on the stairs is only too believable.

Rex Harrison (The Happy Thieves, 1962) is excellent in a custom-made role, handsome adoring husband, but every time he clasps her in a sympathetic embrace, the camera lingers on his eyes showing growing fear at her condition. The roster of supporting stars each brings something distinctive to their role, from the wheedling Roddy McDowell (Five Card Stud, 1968), in only his second movie role after eight years of solid television,  the too-good-to-be-true John Gavin (Back St, 1961) and old-timers Myrna Loy (The Thin Man, 1934) as the doubting aunt and Herbert Marshall (The Letter, 1940) as the impecunious gambler.

Director David Miller (Captain Newman, M.D., 1963) moves the camera in disconcerting fashion. You think you’re settled in for a stage-style scene when suddenly the camera whirls away and focuses on one character. The scene in the elevator is exceptionally well-done as is the finale, but possibly his biggest attribute is encouraging Doris Day to just go for it rather than reining in her character the way Hitchcock did for The Man Who Knew Too Much (1956).

The team of Ivan Goff and Ben Roberts (Portrait in Black, 1960) put together the screenplay from the hit Broadway play Matilda Shouted Fire by Janet Green.

I came at this with low expectations, not imagining Doris Day could pull off such a difficult role, and I came away wondering why she had not in consequence been given other opportunities to show off her dramatic skills.