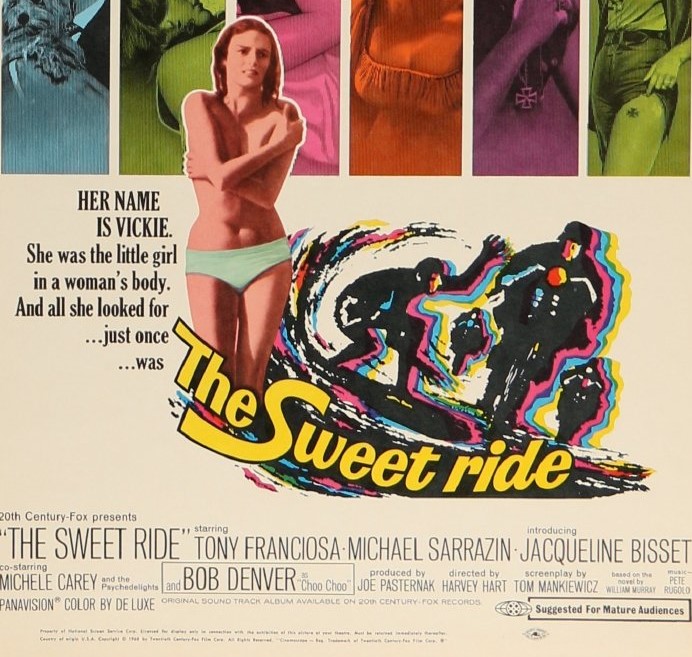 Unusual drama mainlining on Californian surf, sex, bikers, a mystery of Blow-Up (1966) dimensions and the best entrance since Ursula Andress in Dr No (1962). Displays a 1960s vibe with a 1950s pay-off as the “hitchhiker” of responsibility rears its ugly head.

A woman thrown out of a car narrowly escapes being run over. The cops jack in the investigation after television actress Vickie (Jacqueline Bisset) refuses to explain why she’s been badly beaten up.  And so we enter flashback mode to supposedly find out. She makes a glorious entrance, emerging from the sea, minus bikini top, into the lives of surfer Denny (Michael Sarrazin), jazz pianist Choo-Choo (Bob Denver) and ageing beach bum and tennis hustler Collie (Tony Franciosca). From the off, she’s enigmatic, gives a false address, won’t explain bruises on her arm, has something clandestine going on with television producer Caswell (Warren Stevens) and like Blow-Up we are only privy to snippets of information.

She’s half-in half-out of a relationship with Dennis, with Collie hovering on the periphery hoping to pick up the pieces to his sexual advantage. Contemporary issues clog the background, Choo-Choo tries a camp number complete with pink dog to avoid the draft, a neighbor threatens to shoot Parker for wandering around in shorts and habitually stealing his newspaper, epithets like “degenerates” are tossed around, Choo Choo’s girlfriend Thumper, while appearing in movies with titles like Suburban Lust Queen acts den mother, there’s not much actual exciting surfing, and a biker called Mr. Clean is somehow involved.

The romance plays out well, Vicky unsure, Denny convinced but without a livelihood to offer and unable to get a straight answer out of her. Choo-Choo gets the gig of his dreams in Las Vegas and there’s an rape scene, more unsettling because it’s committed by Denny with the bizarre justification of getting “just for once something on my terms.”  And there’s the equally disquieting sense that the only explanation for Vickie’s behavior is to tab her a nymphomaniac, walking out of an argument with a mysterious man in a beach house to drop her clothes for a bout of sex with Mr Clean.

Denny and Collie prove not to be the pussycats they appear, bearding the bikers in their den and beating up Mr. Clean while Denny goes on to deliver a hiding to Caswell. But what this film turns out to be is an examination of vulnerability, how easily those with a new sense of freedom are trapped. An examination of contemporary mores, perhaps, but in not resolving the mystery of Vickie ultimately fails to deliver, especially as it does not, from the outset, carry the kind of artistic credentials of Antonioni in Blow-Up.

Perhaps the mystery needs no resolution, it’s just same old-same old dressed up in the novelty of sexual freedom. There’s no idea of why Vickie was beaten up, and essentially abandoned on the road to become accident fodder, and no hint really of why she fell foul of someone so badly she needed disposed of, no notion that she was a threat to anyone. (Or, for that matter, no explanation of what happened to her bikini top and why, if she was so apparently free with her charms, she was so shy about being seen half-naked.) On the other hand, victim may well have been Vicky’s destiny from the get-go, that kind of innocence only waiting to be defiled.

In any 1960s contemporary picture there’s always the temptation to accept as truthful or reject as phony the lives shown. The idea that sexual freedom bestows actual freedom is usually the issue until consequence (i.e. old-fashioned Hollywood morality) comes into play. This is less heavy-handed than, for example, Easy Rider (1969) or Bob & Carol & Ted & Alice (1969). The characters make decisions to grow up or to stay locked in a world of easy sex, dope and money. There’s no grand finale, just a more realistic drifting apart, and it’s only Vickie who comes apart, although that process had begun long before she met the drifters.

Jacqueline Bisset (The Detective, 1968), in her divinely posh British accent, comes over well as an attractive screen presence and complex character. In fact, she has a bigger part here than in Bullitt (1968) or The Detective (1968). If you wanted anyone to portray a soulful hippie you need look no further than tousle-haired Michael Sarrazin (In Search of Gregory, 1969) and normally if you required someone on the sly, despicable side, Tony Franciosca (Fathom, 1967) might well be your first port of call, but Franciosca proves the surprise here, classic wind-up merchant and predator who exhibits considerable vulnerability when he realizes he is losing the worship of the idealistic young.

Former British matinee idol Michael Wilding (A Girl Named Tamiko, 1962) and Norma Crane (Penelope, 1966) appear as Vickie’s parents.  Bob Denver (Who’s Minding the Mint, 1967) and Michele Carey (The Spy with My Face, 1965) are solid support. Director Harvey Hart (Fortune and Men’s Eyes, 1970) tries to cover too much ground and could have done with narrowing the focus. Future Bond screenwriter Tom Mankiewicz (son of Joseph L.) made his screenwriting debut adapting the book by William Murray.

The DVD is a bit on the pricey side, but if you just want to check it out, YouTube has a print.