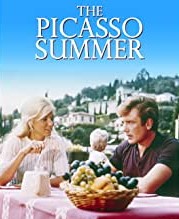 The making of The Picasso Summer was an odyssey in itself but what happened to the picture on completion generated a crisis in Hollywood.

Pablo Picasso in the early 1960s had apparently given “an enthusiastic endorsement” to American layout artist Wes Herchendson to animate some of his paintings. Some time afterwards, Hershendson came across sci-fi writer Ray Bradbury’s short story In a Season of Calm Weather about an American tourist meeting Picasso on a beach. Developing the scenario with the author, the pair turned the idea into an American couple attempting to meet the artist in the south of France.

Originally, the project was modest. It would run only an hour and be shown on television, sponsored by an airline company to promote foreign travel. But once the idea attracted the likes of British star Albert Finney (Tom Jones, 1963) , who had recently filmed Two for the Road (1967) in France, and Yvette Mimieux (The Time Machine, 1960), who had a percentage of the picture, it became bigger. It was the first film for a fledgling production company part-owned by Bill Cosby and when Warner Brothers-Seven Arts stumped up $1.6 million – a reasonable budget since a WB picture three years averaged just $1.75 million – it turned into a full-length feature intended for theatrical release. Filming began in November 1967 in San Francisco and France without a finished screenplay, working in almost improvisational style to a sketchy 20-page treatment.

Herchendson took care of the animated sequences with  the “live-action” section in the hands of Oscar-winning French director Serge Bourguignon. Although making his name with the French arthouse-oriented Sundays and Cybele (1962) he had also made mainstream western The Reward (1965) starring Mimieux and Max von Sydow and romantic drama Two Weeks in September (1967) with Brigitte Bardot, so his credentials appeared strong enough.

But something went very badly wrong. “The resulting footage was completely unsatisfactory,” went one report. Another claimed it was “incomprehensible.” So WB-7 Arts scrapped the first version and, because the movie, often filmed outdoors, had taken  advantage of the seasons, the film was pushed back a year to ensure footage matched. WB hired a new director Robert Sallin to salvage the picture with the principals returning for reshoots.

Initially, that appeared to have done the trick. WB announced it was considering launching the film as part of a big junket aimed at journalists in February 1969, and then screening it “in whole or in part” at a major conference in June with a view to a late 1969 release. A launch date was pencilled in for December 1969 – the original “X”-certificate issued in the same week as Easy Rider by that time had been amended to an “M” – with the intention of “finally getting it on the market.” And there was the signs of some promotional tie-ins with Barbra Streisand recording the theme tune “Summer Me, Winter Me.” But it didn’t appear. Officially, it was on the shelf.

The shelf, at that time, was not necessarily a bad place to be. Many pictures had been held back for a more convenient release spot during the 1960s, even more had been forcibly delayed when successful movies ate up preferential first run movie theatre space. It was nothing, for example, for The Biggest Bundle of Them All (1968) to wait eight months to be released.

But there was waiting and there was waiting. It soon became apparent that The Picasso Summer was not going to find a release date any time soon and that it was, officially, in limbo. Which was an astonishing state of affairs at the end of one troubled decade and the beginning of another. The hundreds of millions lost in big budget roadshows had seen a dramatic cutback in production. Cinemas were crying out for product, anything with a star, rather than being forced to make do with a flood of imports, spaghetti westerns of the here-today-gone-tomorrow variety and sexploitation vehicles featuring unknowns.

Hollywood had been known for routinely throwing stinkers into the marketplace and while exhibitors might complain about poor quality generally they had little option but to screen what was available because there was nothing else. But the harsh financial climate facing studios meant that every dollar spent had to be weighed up. Releasing a bad movie cost as much as releasing a good one with no guarantee that further expenditure in advertising, promotion and prints would generate profit. No point throwing good money after bad.

So Warner Brothers did the unthinkable. Even as Albert Finney recovered his box office status after Scrooge (1970) and Yvette Mimieux starred in hit sex comedy Three in the Attic (1969) and The Delta Factor (1970) the studio kept The Picasso Summer in the vaults. Even throwing it out in a wide release with no premiere or a trial run in an arthouse was considered too risky.

The number of movies that were completely unrelease-able, as opposed to being withdrawn after failing to attract an audience or turning into big flops during their run, was actually very small – Fade In (1967) coming closest to achieving that notoriety even though it had been occasionally shown in cinemas, and it was also low-budget.

But, suddenly, at the end of the 1960s that number started growing. MGM’s The Appointment (1969) was also shelved. And that had more apparent box office cachet with  Oscar-nominated director Sidney Lumet (The Pawnbroker, 1964) and featuring Oscar-nominated Omar Sharif (Doctor Zhivago,1965), an even bigger star than Albert Finney, and Anouk Aimee (Justine, 1969) also Oscar-nominated with greater box office clout than Yvette Mimieux. After it was booed at Cannes, MGM cancelled the American release after one U.S. test date .

But the trickle of shelved movies was becoming a flood. Into that category fell John Frankenheimer’s The Extraordinary Seaman (1969) starring Faye Dunaway (Bonnie and Clyde, 1967) and Oscar-winner David Niven fresh from hit comedy The Impossible Years (1968). Courtroom drama Hostile Witness (1969) starring another Oscar-winner Ray Milland (Dial M for Murder, 1954) was denied a release as was comedy western A Talent for Loving (1969) with Richard Widmark, on a career high after Madigan (1968), and Adam’s Woman (1970) with Beau Bridges, who would strike a box office mother lode with Gaily, Gaily (1969) and John Mills (The Family Way, 1967). Swelling out the list was Crooks and Coronets / Sophie’s Place (1969) starring Telly Savalas (The Heroin Gang, 1968) and Hammer sci-fi Moon Zero Two (1969).

At a 1970 press conference, questioned about the shelving of The Picasso Summer, a Warner Brothers executive admitted: “We don’t know what to do with it, but not in the sense marketing is a problem; completion into a releasable form would seem to be the nub.”

By 1971, The Picasso Summer was not alone in failing to meet expectations. Some 80 movies funded by the majors had either still to be screened or had already been yanked off screens after poor test showings or minor playoffs failed to garner an audience. A year later Warner Brothers alone had ten completed movies on its books that would never see the light of theatrical day.

There had been one get-out clause for under-performing movies – television. A sale to the networks could bring in a substantial amount, sometimes enough to balance the books. But television was beginning to look askance at product that, in subject matter and in relation to violence and nudity, did not suit the Big Three channels. It was soon obvious that the networks had “lost their omnivorous feature film appetite.”

But there a light on the horizon. One network was interested in more unconventional fare and pictures that it could present as U.S. “premieres.” The CBS  “Late Night Movie” slot airing on a Thursday aimed to attract an adult audience seeking more adult material. The conventions of television would still minimize nudity but the films themselves would have an adult theme. Thus, in 1972 The Picasso Summer, The Appointment, The Extraordinary Seaman and Adam’s Woman were shown on CBS.

But there was one big plus for Warner Brothers. CBS paid $1.6 million for the movie, making it, according to one wag, the most expensive made-for-television movie. That turned a potential loss into break-even.