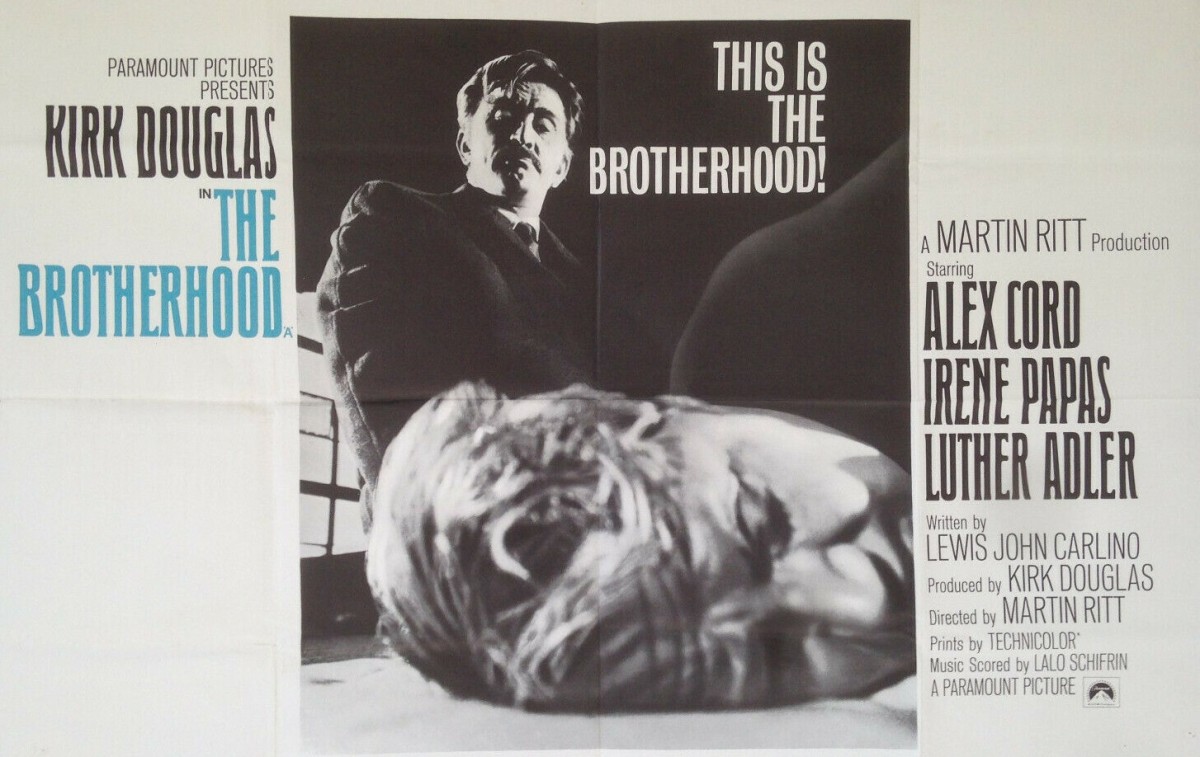 Minimal violence and no sex was the wrong recipe for this Mafia picture – as proven at the box office – but this is an absorbing, underrated drama nonetheless.

It bears a surprising number of parallels to The Godfather (1972). Pure coincidence, extraordinary though that may appear, because The Brotherhood premiered in December 1968 while the Mario Puzo novel was printed in March 1969 (and delivered to the printers long before), so no opportunity at all for plagiarism.

The two films could be opposite sides of the same coin. For a start, both begin with a wedding. Vince Ginetta (Alex Cord), brother of Mafia kingpin Frank (Kirk Douglas), is marrying Emma (Susan Strasberg), daughter of another Mafia chief Dominick (Luther Adler). Like Michael (Al Pacino) in The Godfather, Vince is just out of the army, well-educated and primed for a life outside the business. And like Michael is called upon to commit an act of supreme violence. There’s even a hint of Tom Hagen (Robert Duvall) in the relationship between the brothers, Frank having brought up the much younger Vince after his father’s premature death.

And just as Don Corleone (Marlon Brando) refuses to join the other Mafia families in a new business venture (in that case, drugs) so Frank bows out of an incredibly high risk (but amazingly prescient) scheme to invest in electronic firms involved in military work for the government, a deal that not only promises huge profits but a potential hold over the powers-that-be.

Frank’s wife Ida (Irene Papas) is like Don Corleone’s wife, not wanting to know anything about the business, but both Emma and Frank’s daughter Carmela (Connie Scott) are thematic cousins to Kay Adams (Diane Keaton) as initial implicit trust is wiped away. When Frank dances with Carmela at the wedding, that is reflected in Don Corleone dancing with his daughter at her wedding. Like The Godfather our first sight of the other Mafia chieftains – including Jim Hagen (Murray Hamilton) and Don Peppino (Eduardo Cianelli) – is at the feast where they are viewed with suspicion by Frank’s clan. And the scene where Frank uses a banana to tease his nephew will remind you of Don Corleone spooking his grandson with an orange.

However, the twist, if you like, is that, unlike Michael, Vince is desperate to join the Family and is instrumental in developing legitimate enterprises, which is echoed by Michael Corleone’s strategic shift to Las Vegas. In some respects, Frank is more like Sonny (James Caan), happy to assume personal command of murders which the other Mafia chiefs now scrupulously delegate to “mechanics” in Los Angeles. He is more old-school whereas the others act as respectable businessmen.

And then it becomes a question of loyalty. Which side the ambitious Vinnie will take is crucial to the story. Frank is under pressure on all sides, from the other Mafia leaders, a government investigation, Vinnie, and the need to exact revenge on the man who caused his father’s death.

There is authentic detail here as well – religious procession in Sicily, Frank playing boccia (the Italian version of the French boules) with his old pals, family dinner, canary stuffed in the mouth of a stool pigeon, but it is less spaghetti-drenched than The Godfather. Screenwriter Lewis John Carlino (The Fox, 1967), also listed as technical adviser, claimed to be drawing on his intimate knowledge of organized crime.

There are only three moments of violence – four if you count a shocking moment of someone spitting on a corpse at a wake – a pair of straightforward murders that bookend the film, plus a scene of Godfather-style brutality in which a man slowly strangles himself to death after being hogtied. Everyone is happily married, Ida very old-school to the extent of removing her husband’s clothes (and shoes) when he returns home drunk, Vince in a good relationship.

Kirk Douglas (Cast a Giant Shadow, 1966) is excellent in a difficult role that presents a fully rounded character, playful with his daughter, loyal to his wife, holding his own against the other mob bosses, enjoying the company of the old-timers who resemble his father, and the changing nature of his relationship with brother Vince. Alex Cord, whose work I initially dismissed (Stiletto, 1969), I have come to more fully appreciate, especially here, where, in a masterpiece of restraint, he makes the transition from adoring brother to threat.

The supporting cast is terrific, a rare Hollywood sojourn for Irene Papas (The Guns of Navarone, 1961), Luther Adler  (Cast a Giant Shadow, 1966) as one of the hoodlums exasperated by Frank’s recalcitrance,  Murray Hamilton (The Graduate, 1967) but, except at the start, Susan Strasberg (The Trip, 1967) is underused.

While director Martin Ritt (Hombre, 1967) is at times guilty of melodrama, his rendering of family life is much more nuanced than Coppola’s. There are very tender moments between Frank and his wife and Frank and his daughter, as well as moments where Ida plays a more maternal role.

For nearly half a century, The Brotherhood has lain in the shadow of The Godfather simply because they both deal with the Mafia. But this is an excellent movie in its own right.