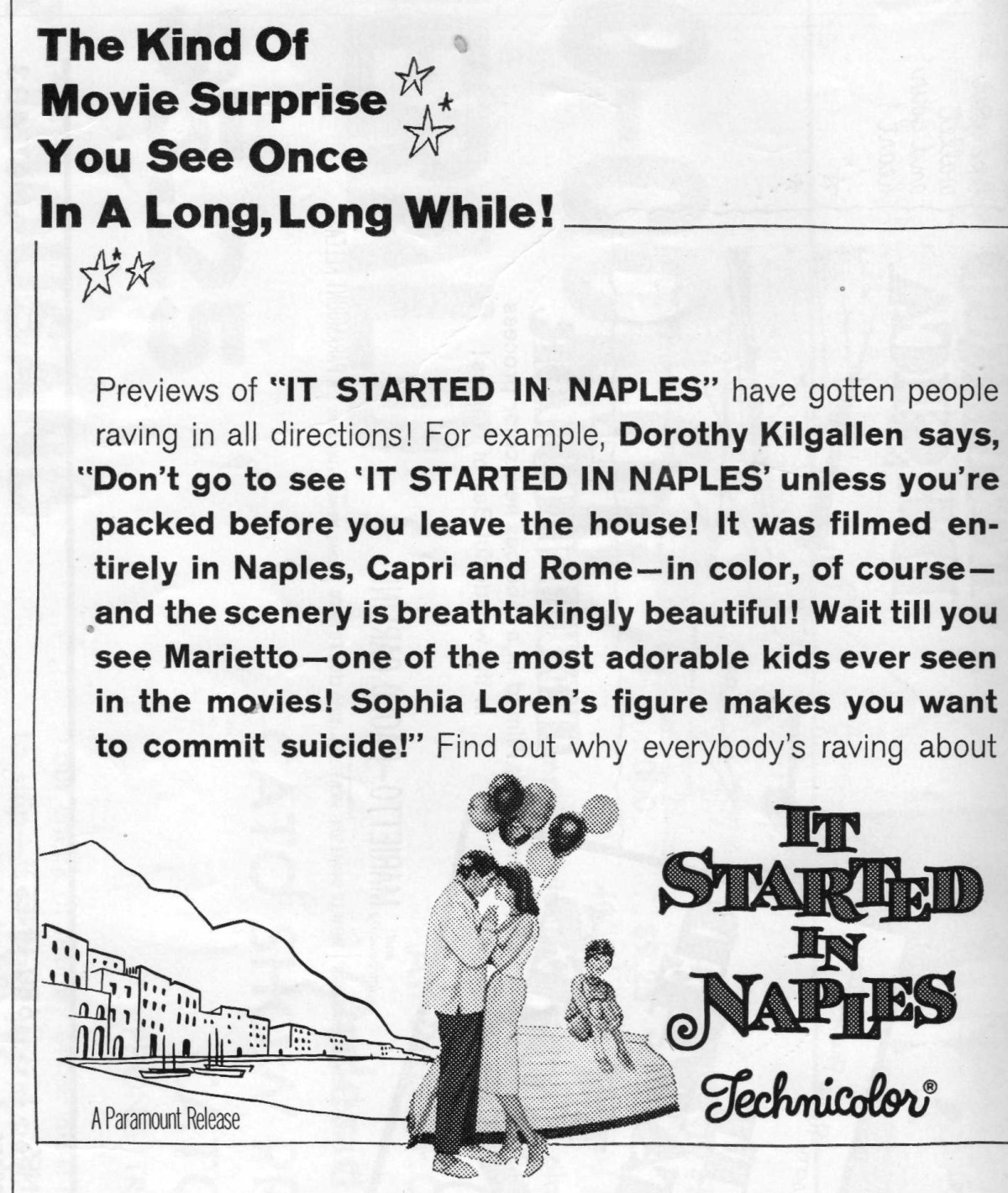 Unusually for a movie of this era, Paramount took one image of Clark Gable and Sophia Loren up close and personal and stuck to it. It was more normal for an marketing campaign to include half a dozen different adverts each with a separate strapline. Here, while the copy occasionally changed the central image remained the same.

Unusually, too, Paramount made a big play of getting critics on board prior to the film’s release. So it came garlanded with the imprimatur of the likes of television host Ed Sullivan, famed critic Louella Parsons and syndicated columnist Dorothy Kilgallen. Plus the studio had embarked on a major promotional campaign in the Sunday supplements of the biggest circulation newspapers in the U.S.

Overall, there was a broad sell. While Clark Gable and Sophia Loren – “two prime examples of cinematic sex appeal” – were of course key, the marketeers also promoted “sensational young Italian boy Marietto” (playing the orphaned Nando) and Carlino, the Neapolitan answer to Elvis Presley who was Loren’s guitar-playing accompanist. In appealing to “those who like poignant drama” it also set out to hook “those who like musicals” as well as moviegoers who “like being magic-carpeted away to far-away places.”  In other words, something for everyone.

But the write-ups and photography favor Loren, who displays her legs in a revealing costume, as well as her cleavage and a separate article extols her singing and dancing, the latter described as “her secret career passion.” Audiences were promised an “all-out rock-and-roller.” Loren, of course, had come into her own as a singer in Houseboat (1958), where she performed two songs, but declined offers of a recording career.

The Pressbook is somewhat short on the nuggets that usually accompany this kind of promotional material because the two stars were already so well known. About all potential moviegoers learned about Gable was that he was now such a devoted father he brought his family on location.

There’s certainly a curious piece called “It Hurt Gable More Than Sophia” which, on reading the text, turned out to be untrue. When Gable was called upon to throw Loren out of bed in one scene, he “put too much Gablesque gusto” into it, flipping her out onto the marble floor.  Loren was the one who suffered bruises on legs, hips and shoulders. And in true Hollywood fashion producer Jack Rose “rushed to her aid” but only after ensuring that her startled expression had been captured on camera.

Taglines employed included “you, too, will say it’s wonderful;”  “you’ll loosen up and pleasure up on the isle of Capri;” and “you’ll want to be there when the fun starts.”