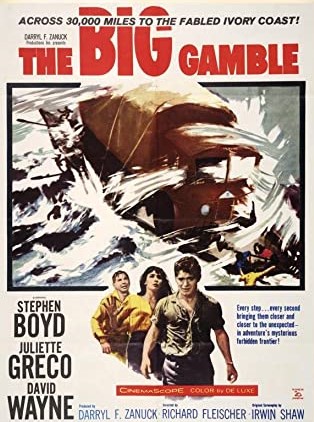 If only there had been some serious money put behind this picture it would have been an absolute cracker, custom-made for the likes of Cinerama which didn’t go down the dramatic route until a few years later. It’s a bit “Hell Drivers Goes to Africa” but with some really quite stunning sequences.

Whatever French chanteuse Juliette Greco had to offer on stage and in a personal capacity – lovers included Miles Davis and this film’s producer Darryl F. Zanuck – never seemed to translate to the screen and the most we get is a kind of tomboyish perkiness.

It’s a medium-grade cast, the lead taken by Northern Irishman Stephen Boyd (here playing a Dubliner) hot at that time from coming straight off a supporting role in Ben-Hur and who would be hot at various times during his short-lived career (he died at 45) while equally never making the transition to major star. David Wayne (The Three Faces of Eve, 1957) is the sad sack brother who joins the other two in a bold plan to set up a haulage business on the Ivory Coast in Africa.

The opening sequence demonstrates the dreary Irish life Boyd is trying to escape with a sparkling cameo from Sybil Thorndike as the family matriarch before the African sequences kick in. Apart from scenes shot at Ardmore Studios in Bray, Ireland, the rest is clearly filmed on pretty dangerous locations if the unloading of a lorry onto what looks like little more than a large canoe is anything to go by.

After an unpromising start, the intrepid trio (well, two are bold, Wayne is not) set off into the wilderness. There are two edge-of-the-cliff sequences that would have The Italian Job fans frothing at the mouth, a runaway lorry in the best Cinerama tradition and an astonishing section crossing a swollen river where clearly the actors did their own stunts. In between we have snippets of genuine Africa, especially canoeists braving the surf and an African funeral party.

Emotionally, beyond Boyd sticking out his chin as much as possible, the main drama focuses on fraternal rivalry with Wayne trying to pull himself together in the face of a mission he believes doomed to failure. Directed by the underrated Richard Fleischer, best known for 20,000 Leagues under the Sea (1954), Compulsion (1959) and later The Boston Strangler (1968) and here with some help from Elmo Williams, it has a decent enough script from novelist Irwin Shaw (The Young Lions).

All-in-all this tight little film more than does justice to its miserable budget with some genuinely exciting sequences.   As a wee bonus, if you listen hard to Maurice Jarre’s score you will hear strains of some themes that turned up in Lawrence of Arabia.