Desert pictures come in two varieties – men battling the elements with little or no female distraction and men distracted from battling the elements by the presence of a female. Since the film I reviewed earlier today, Sands of the Kalahari,  fitted largely into the first camp with the sole female being viewed as a prize rather than a temptress, I thought it might be interesting to compare it to Station Six Sahara, made the year before, in which the seductive Carroll Baker disrupts the men-only oil station.

David Lean spent months in Jordan capturing his vision of the desert for Lawrence of Arabia. Seth Holt was granted no such luxury, a few weeks at Shepperton Studios in England to make this British-German co-production.  It is a surprisingly tight and effective drama made on a low budget excepting whatever fee induced Hollywood star Carroll Baker to join.

Five men trapped on an oil pipeline maintenance unit drive each other to distraction. Loud Scot Ian Bannen constantly needles stiff upper-class Denholm Elliott while overbearing German boss Peter Van Eyck cheats at poker. The arrival of steely-eyed German Hansjorg Felmy alters the status quo as he refuses in his own quiet way to knuckle down to authority. There is a wonderful psychological battle going on between Bannen and Elliott.

Extremely envious of the number of letters Elliott receives, Bannen offers a month’s pay for just one. When the offer is accepted, Elliott cannot stop fretting about what he might have given away and what secrets it revealed about himself. The arrival of Carroll Baker upsets the equilibrium further as the men attempt to win her affections. While apparently promiscuous, she is steelier than the lot of them, and tensions climb high when she begins to spread around her favors. Interestingly, she does no wooing but waits for men to come to her.

Given the budget restraints, or possibly because of them, it is surprisingly well directed. Two scenes stand out in directorial terms. In one featuring Bannen and Elliott, the Scot is only partly visible behind a piece of furniture but his dialogue continues even when out of sight. In the other, one of Baker’s suitors finds her door locked and as she is about to reply a hand appears (not in aggressive fashion) to cover her mouth, indicating she already has chosen her bedmate.

Naturally, this can only lead to a grim end. The cast of male unknowns are uniformly good but Baker steals the show as you would expect. Given the times, there was no nudity, but the overt sexuality certainly skirted the bounds of what passed as decency and Baker is alluring however little or much she wears. But her sexuality takes second place to her individuality. Her independence will not be surrendered to a man. Despite the budget restrictions it stands up very well.

At any given moment Carroll Baker could be both a top Hollywood star and a middling box office attraction. She had just come off How the West Was Won (1963) but had really failed to justify the potential shown in Baby Doll (1956). Peter van Eyck (The 1,000 Eyes of Dr Mabuse, 1960). was best known for his role in Wages of Fear (1953). Scottish actor Ian Bannen (Psyche 59, 1964) was beginning to merge as a strong character actor, he and van Eyck had appeared together previously in The World in My Pocket (1961). The career of Denholm Elliott (Maroc 7, 1967) followed a similar arc to Bannen as a supporting player of distinction. Seth Holt (Danger Route, 1967) was considered a rising directorial star until his untimely death at the age of 41. 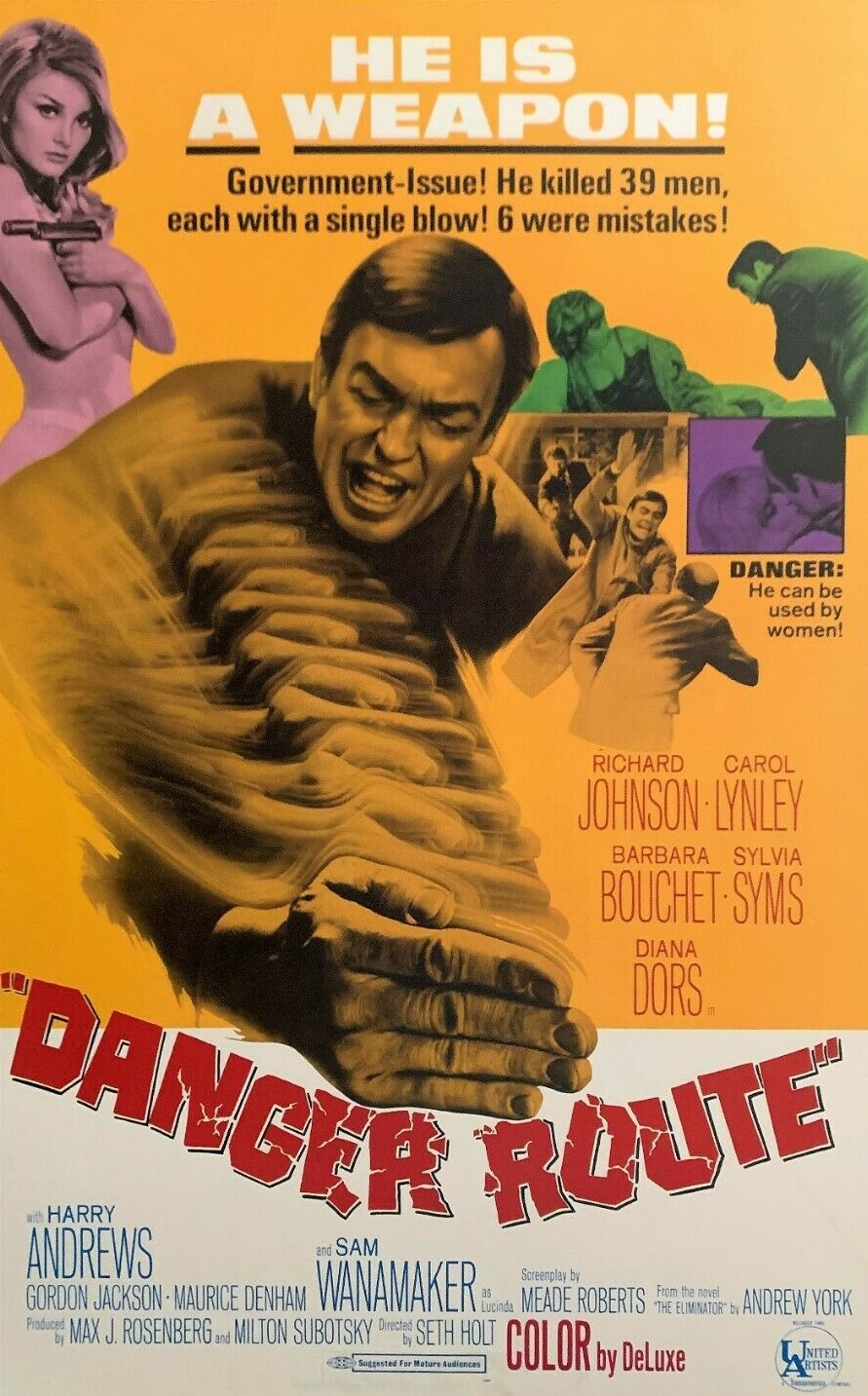 If the producers had not signalled Bond-style ambitions with a big credit sequence theme song by Anita Harris, moviegoers might have come at this with more fitting expectations in the Harry Palmer and John le Carre vein. So although slipping into the late decade spy boom flourish don’t expect villains planning world domination, gadgets or a flotilla of bikinis.

Seth Holt’s bread-and-butter espionage thriller sets government agent Jonas Wild (Richard Johnson) – on his “last assignment” no less after eight licensed murders in five years – to kill off a defector in the far from exotic location of a Dorset country house not realizing that he is also being set up. That his liquidator will be a woman puts the mysterious Mari (Barbara Bouchet) in pole position.

Wild gains access to the heavily-guarded mansion by seducing housekeeper Rhoda (Diana Dors) but after completing his mission is captured and tortured by Luciana – pronounced with a “k” – (Sam Wanamaker) who explains he is a patsy and that there is a mole in M.I.5. When his boss Tony Canning (Harry Andrews) disappears and another friend is murdered, Wild goes on the run with Mrs Canning (Sylvia Syms) and eventually makes his way back to his bolt-hole in Jersey to solve the mystery.

There is a decent amount of action, including a fight with a guard dog and a battle on a fog-bound yacht. Clever maneuvers abound – a bug is planted in a bandage. Treachery is always just round the corner and there is no shortage of suspects.

The film’s down-to-earth approach is somewhat refreshing after half a decade of spy thrillers and spoofs. Wild doesn’t employ anything more hi-tech than masquerading as a brush salesman to win over Rhoda. And although that relationship ends up in bed, there is no sex, Wild having drugged her to avoid that complication. Tony Canning is nagged by his wife. Wild’s girlfriend (Carol Lynley) is a sweet girl, sexy in a languid rather than overt fashion.  And Luciana takes enormous pride in telling Wild just how stupid he has been.

But that comes with a caveat. The plot doesn’t quite hang together and the movie sometimes fails to connect.

That said, Johnson (Deadlier than the Male, 1967) is excellent, quite an accomplished actor rather than a brand name. Both Barbara Bouchet (Casino Royale) and Carole Lynley (Harlow, 1965) play against type while Sylvia Sims (East of Sudan, 1964) and Harry Andrews (The Hill, 1965) present variations to their normal screen personas. Sam Wanamaker (The Warning Shot, 1967) has a peach of a role and Gordon Jackson (The Long Ships, 1964) and Maurice Denham (The Long Duel, 1967) are afforded small but critical parts.

This is not easy to come by, so you are best looking for a secondhand copy.