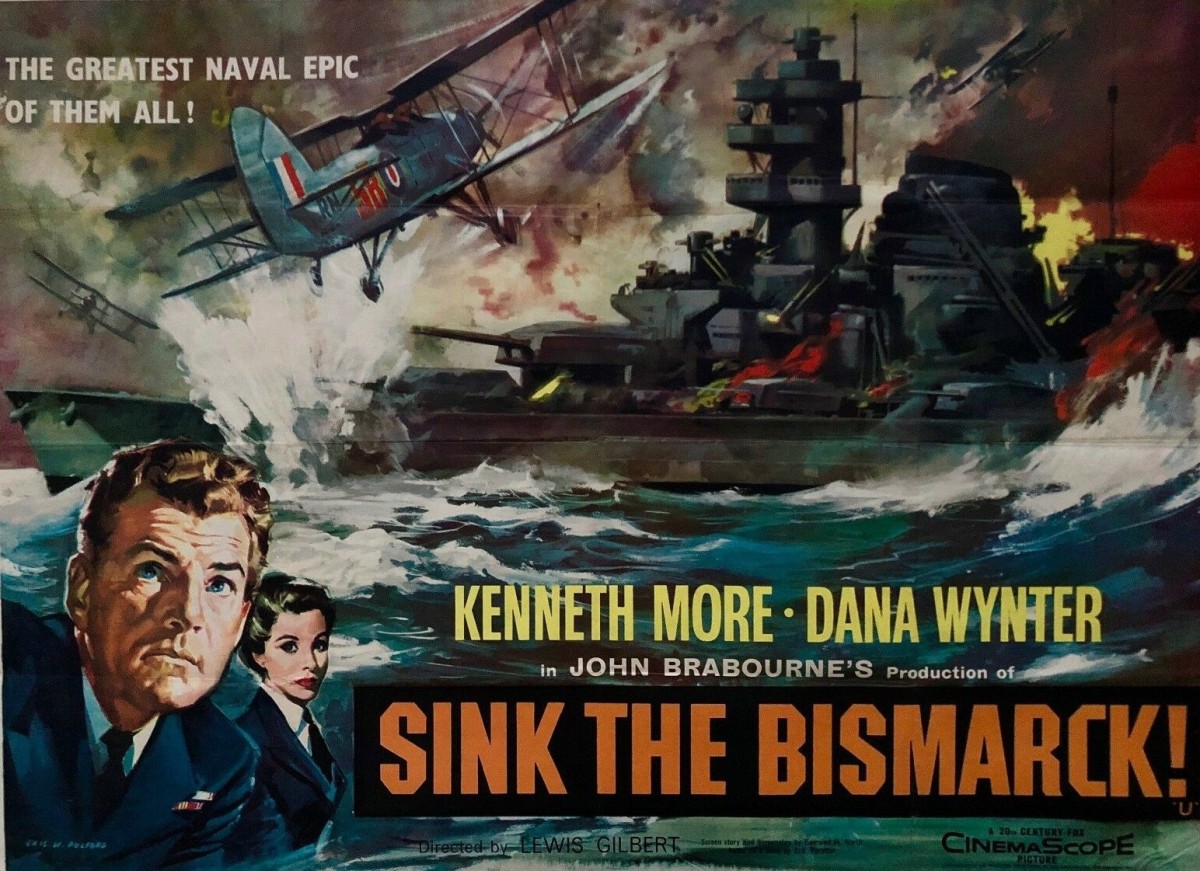 Hard to believe but outside of the Hollywood big-budget Bridge on the River Kwai (1957), this was the biggest British film at the U.S. box office in the previous decade. In fact, the British war films that did so well in the home territory, The Cruel Sea (1953) and Reach for the Sky (1956), sank like a stone when exported to in America while earnings for Ealing comedies,  limited to arthouses, hardly made a dent in the box office.

What makes this so appealing is the very lack of Britishness and the intrusion of a Yank, famed reporter Edward  R Morrow (playing himself), interrupting the action at various points to keep audiences up to speed. The fact that the sinking of the Bismarck, the biggest battleship ever built, was one of the few British actions at the start of the Second World War to be counted a success probably helped. Watching the Brits being lionized for defeat was not an attractive notion for global audiences.

But in the main it is a thrilling docu-drama, very much a departure for the genre, with every nuance of potential consequence spelled out. Dialog and models being moved across maps announce the risks inherent in the British attack: the superiority of the newly-built German battleship, the multiple options the Germans had in 1941 to escape, the difficulties in pinpointing the German vessel in the fog-bound waters of the North Sea, and the devastation the battleship could inflict on the beleaguered convoys on which Britain depended to stay afloat. In addition, even when targeted the Germans could flee to occupied France or potentially summon U-boats or air support.

So in the manner or Operation Crossbow (1965) or Day of the Jackal (1973) the audience is primed for a minute-by-minute enterprise, the battleship deemed so dangerous that the Admiralty is willing to risk its own scarce supplies of battleships, destroyers, cruisers and aircraft carriers in a bid sink the enemy. It is so much a documentary that the beyond the thrill of the hunt there is little room left for drama and certainly little of the stirring kind that had become such a byword for the British version of the genre – and such a turn-off for foreign audiences who could hardly make out what the actors were saying never mind work out why such-and-such a mission they had never heard of was so important.

In any case emotion is forbidden in the subterranean claustrophobic Admiralty War Office where new operational commander Capt Shepherd (Kenneth More) holds sway. A martinet, “cold as a witch’s heart,” on arrival he rids staff of what he sees as the rank indiscipline of addressing colleagues by forename rather than surname, eating sandwiches at a desk to which the workforce have been chained for hours  and various minor offences against the strict code of a uniform.

It was inherent in this type of picture that the land-based unit suffer the casualties of war, husbands dead or missing in action, wives and children killed by German bombs. But the tightening of the stiff-upper-lip ensures that when such revelations become known, they appeared like emotional depth-charges on this otherwise staid ocean. And Capt Shepherd, through his choices, as would be true of many high-ranking officers, might be sending his own son to is death.

This is also one of the first instances in war pictures where the Germans are not treated as stock villains, but intelligent people, like Admiral Lutyens (Karel Stepanek) with his own vanity and a hunger for redemption, and Capt Lindemann (Carl Mohner), as valiant an opponent in the cat-and-mouse duel where outwitting the British enemy could wreak untold carnage and hasten – unusually from the German point-of-view rather than from the Allies – the end of the war.

A few months after launch the Bismarck is spotted leaving its home port, destination North Atlantic to feast on convoys travelling from America with invaluable supplies. There are four possible routes open to get round the top of Britain. To prevent the Germans reaching any of them British ships must be sacrificed, including HMS Hood – three survivors out of a crew of 1400.

It’s David vs Goliath except David is a terrier capable of inflicting tiny wounds that drain the battleship of some of its power, loss of fuel and rudder problems limiting movement. It’s a different kind of war picture, as well as the big guns blasting at each other over huge distances, the British employ biplanes loaded with torpedoes, a weapon also used in some instances by its ships.

To keep audiences more heavily involved, there are snippets of dialog involving characters on board the various ships, some in distinctly un-stiff-upper-lip mode, and montages of the various vessels getting ready for action, as well as shots of devastation should a shell find its target.

But basically it’s  brilliantly-told tactic-heavy war picture that shows the shifting battleground, how the various ships are deployed, with no shortage of telling the audience how crucial success is and how crushing defeat. There’s no reliance on individual heroism, no snappy soldier defying authority, no hunch being played out, none of the usual cliches of the genre, instead, as with The Longest Day (1962) a clear explanation of what’s going on with superb battle scenes for the action-inclined.

It’s fair to say that even on the small screen, the models look a bit iffy, but this is more than compensated by other scenes on real warships, the use of newsreel footage, and fast cutting.  That action never takes place under a clear blue sky but always in murky waters also adds to the realism.

In a role that would have been custom-made for Kenneth More (The Comedy Man, 1964), king of the stiff-upper-lip, rather than simply spouting his lines, he adds considerable emotional depth. Dana Wynter (Something of Value, 1957) is excellent as his equally buttoned-up assistant.

Lewis Gilbert (The 7th Dawn, 1964) does a brilliant job of bringing this all together, adding touches of emotion and humour to what could have been a too-dry concoction, drawing on a screenplay by Edmund H. North (HMS Defiant/Damn the Defiant, 1962) which was based on the book by C.S. Forester of Hornblower fame.