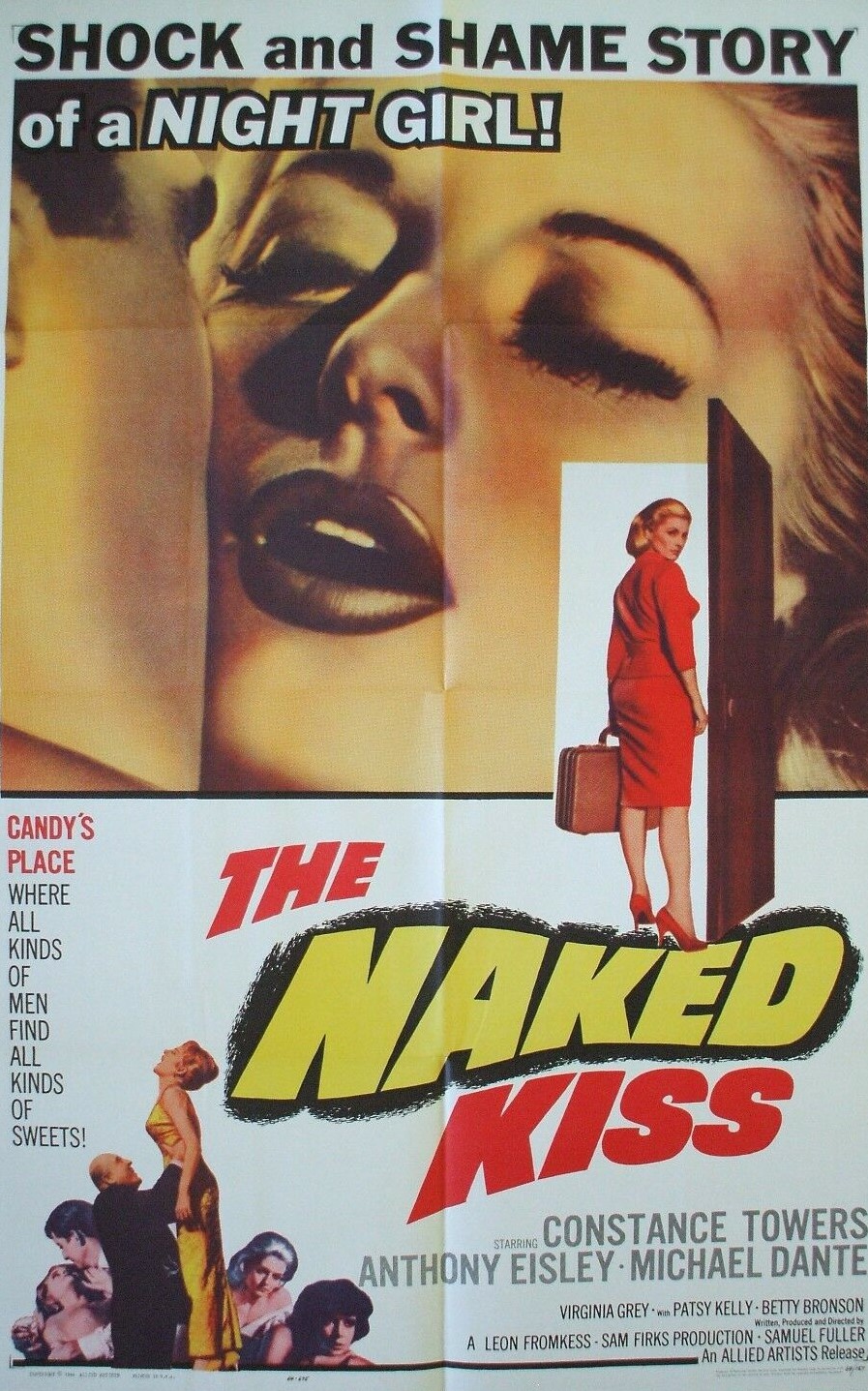 Certainly doesn’t start off as your standard entry to the criminal-trying-to-go-straight mini-genre when a bald woman beats up and robs her pimp.  Kelly (Constance Towers), who knows “your body is your only passport,” nonetheless sets out to create a new life for herself as a salesperson (hawking overpriced champagne) in a small town where prostitution is outlawed.

She could easily settle for being the mistress of corrupt cop Griff (Anthony Eisley), but he’s something of a pimp, sending girls-off-the-bus across the river to the joint run by Candy (Virginia Grey). Instead, she takes up nursing, in an institute for crippled children, providing tough love to the kids. In due course, she hooks up the town’s handsome philanthropic millionaire Grant (Michael Dante), a relationship which Griff threatens to wreck.

However, she fesses up to Grant, now her fiancé in double-quick time, about her past and, remarkably, he forgives her. And you think, my goodness, she’s going to get away with it, new life, new career, a job she loves in which she is adored by the kids. You could be tootling along Sentimental Boulevard: Kelly forms the kids into a choir, she coaxes slightly mad  landlady Josephine (Berry Bronson) back to reality, determines to make her own wedding dress rather than be beholden to the millionaire, and takes under her wing nurses Buff (Marie Devereux) and Dusty (Karen Conrad) who have fallen victim to life’s traps.

You could be in Movie of the Week territory, another hooker with a heart of gold, except while she’s been turning her life around, there’s the inherent tension that she must fail. But this being a Sam Fuller (Shock Corridor, 1963) picture, Kelly is one tough cookie, outsmarting for a start Griff, who sees her as another in his assembly line of sex workers, and beating up Candy for daring to seduce Buff away from nursing by the promise of big money. Kelly ain’t sentimental. She views herself as a “broken down piece of machinery” with a future beckoning of “nothing but the buck, the bed and the bottle.” This is partly a shrew observation of herself but also of the production line nature or prostitution.

So there’s a catch. And it’s just plain awful. Grant is a paedophile. He has chosen Kelly because, as a sex worker, she is a deviant who will “understand my sickness.” And she’s sickened that despite her best efforts, that’s how she’s viewed, as a woman who would condone such behavior, and that he somehow believes she is complicit, in encouraging young girls from the hospital to visit him.   So she kills him.

And then reality strikes with a vengeance. She finds herself embroiled in the worst kind of small town corruption. Griff, who’s gunning for her anyway, refuses to believe her accusation against Grant, his best pal. Candy, who’s also gunning for her, says Kelly planned to blackmail Grant. There’s money missing, so she’s branded a thief as well. And nobody can find the little girl Grant had lined up.

An absolutely terrific film, constantly switching gear, twist after twist, but incredibly humane. There’s probably never been a better portrayal of the working girl, here all shown as vulnerable rather than predatory, as victims caught in a man-made web, and although dealt with in subtle fashion many clearly suffering from mental illness.

Kelly is cultured, reads Byron and Goethe, embraces the classical music education a relationship with Grant promises, but is unusually self-analytical. When she looks in a mirror she’s not seeking physical flaws but shortcomings of character. She understands all too well how men play women. Her tragedy is that when she sets aside her inbuilt cynicism, the man she trusts turns out to be as untrustworthy as they come.

But it is Sam Fuller’s movie. He was a triple hyphenate, writer-producer-director, so his vision was never in doubt. The dialog is terrific – the explanation of the title alone is extremely creepy – often cutting to the bone, but the best sequences lack words at all, the black-and-white photography bringing an air of film noir, and for all the striking toughness of the heroine, several moving scenes.

It’s not shocking in Fuller’s normal manner. As I can testify, it suggests to the viewer it’s going one way, and the core terrible act creeps up upon the audience. But it is brilliantly directed, even with a B-picture cast. Pulp reinvented as art. You could possibly argue in its vision and subject matter this was the birthplace of the indie.