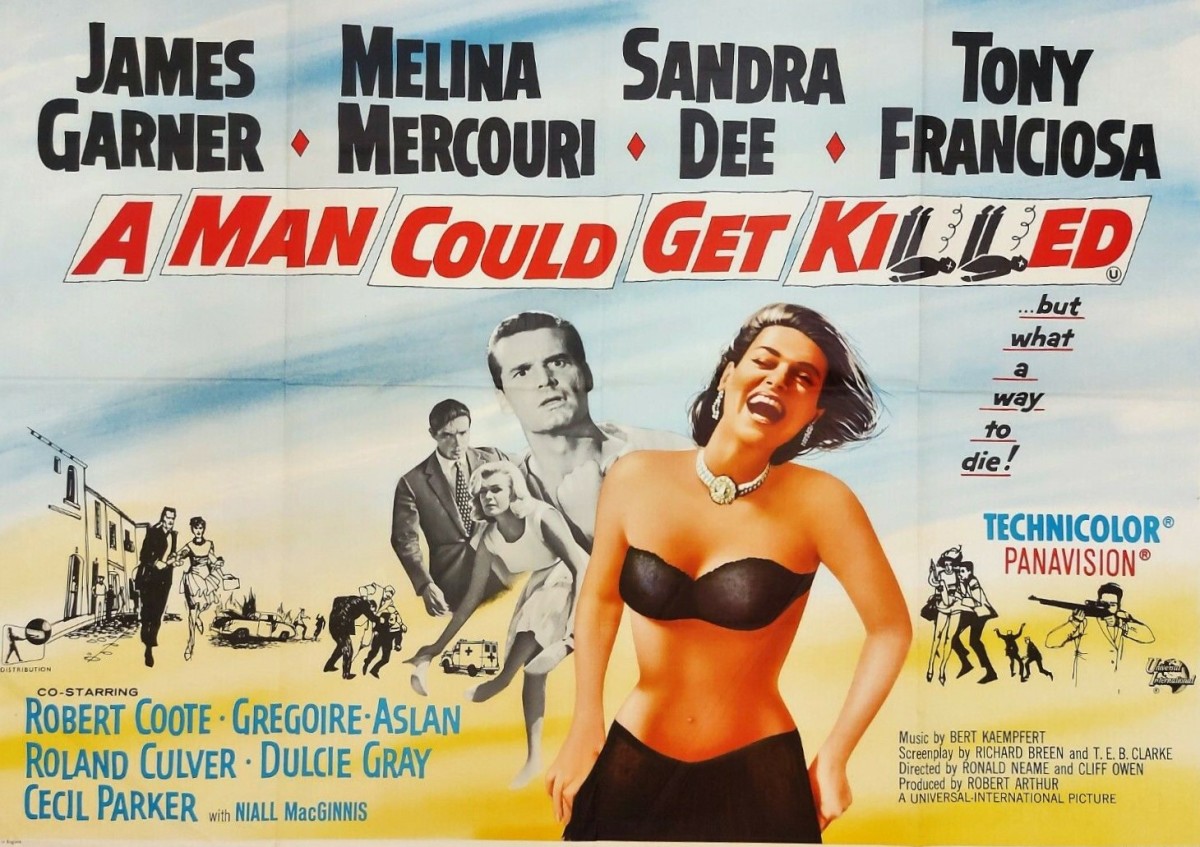 An unexpected delight. More farce than spoof and more Hitchcockian thriller than espionage adventure, but bursting with laughs. Spinning on the premise of mistaken identity, a New York banker becomes mixed up with diamond smugglers while being pursued by a posse of Europe’s shadiest characters and a very determined femme fatale. All the more enjoyable because identity confusion is very difficult to pull off unless you have a top class cast like Cary Grant and Eva Marie Saint in North by Northwest (1959).

Landing in Lisbon, New York banker William Beddoes (James Garner) is mistaken for the emergency replacement for a recently-deceased British spy. It’s not just embassy officials like Hatton Jones (Robert Coote) who are afflicted by this notion, the villains are so determined to get rid of their man two bombs are planted in his car. Attending his supposed predecessor’s funeral brings Beddoes into contact with glamorous Aurora (Melina Mercouri). Smuggler Steve (Anthony Franciosca) offers his service to Beddoes to help recover $5 million in stolen industrial diamonds. To complicate matters, identity is also an issue for Steve, who while working under an assumed name is outed by Amy (Sandra Dee) who recognizes him as her family’s former gardener.

Unable to convince anyone he is not who he says he is, Beddoes is swept into the conspiracy, his every move under surveillance by rival villains, including Florian (Gregoire Aslan) and Milo the Murderer (Arnold Diamond), while Aurora attempts seduction to bring him to heel.  Eventually, while never ruling out double-cross, Beddoes, Aurora, Steve, Amy and embassy officials work together to decipher a series of clues revolving around rice, azaleas, a red pig and a man who sneezes, none of which align with obvious meanings and naturally are interpreted as something to do Red China or the Iron Curtain.

A picture based on a simple premise is better than a spoof that labors to create a plot and so it’s true here. Everything springs from the mistaken identity and the diamond hunt, and as one twist effortlessly follows another characters with conflicting agendas collide. Beddoes spends all his time trying to escape from kidnap, assassination or seduction. It’s helter-skelter stuff, so no surprise that chases, of the Buster Keaton variety, produce laughs. I found myself laughing out loud at the scene where Steve can’t find anywhere to sit in a café that is not next to a villain, Beddoes getting attacked by drapes, an ambassador (Cecil Parker) more concerned with knotty chess problems than espionage, and a great visual gag where Beddoes  wallops a cop. Escaping pursers, Steve takes a short cut that leads him straight back into danger.

Naturally, the whole enterprise is loaded with confusion, not least because making the wrong decision, taking the wrong turn and making the wrong assumption sets up the next gag. Throw in ambulance theft, Beddoes sitting in a row of hookers in jail, a tape recording turning up in a bread roll and you get the idea.

The cast could have been hand-picked for this kind of picture. James Garner (The Hour of the Gun, 1967) is the  natural successor to Cary Grant in the double-take department. This role is a play on previous ones where he was the trickster and not the patsy. He’s more stiff-upper-lip than the Brits. Comedy skills honed on this one that were put to terrific use in Support Your Local Sherriff (1969). And while Melina Mercouri (Topkapi, 1964) is more than a little over-the-top, the dominant woman from whom ordinarily Beddoes would run a mile, but also possessing the cunning survival instincts lacking in an innocent like him. One scene that depicts their contrasting characters so well is when she runs around half-naked to create a diversion and he chases after trying to cover her up, clearly no idea that distraction is necessary.

Tony Franciosca (The Swinger, 1966) leads with his teeth, his smarminess undercut by Sandra Dee reminding him he is a glorified gardener. Dee (Tammy and the Doctor, 1964), however, never manages to stray from her ingénue roots. An excellent supporting cast includes Robert Coote (The Swinger), Gregoire Aslan (Moment to Monet, 1966), Cecil Parker (A Study in Terror, 1965). This was British actress Dulcie Gray’s final film.

The movie had a fractured genesis. Original director Cliff Owen (The Vengeance of She, 1968) fell out with the stars and was shunted aside in favor of Ronald Neame (Gambit, 1966), more adept at male-female chicanery. The screenplay originated from comedic masters – Richard Breen (Do Not Disturb, 1965) and T.E.B. Clarke (The Lavender Hill Mob, 1951)  – based on the book Diamonds for Danger by David E. Walker. And there are many delightful lines. “I’m my own bait,” spouts Aurora. Trying to placate Amy, Steve explains “It’s unusual to find this many dead spies in one day.”

The movie failed to register with the public which was astonishing. At a time when theme songs helped turn other films like Alfie (1965) into successes, the movie contained the tune that would give Frank Sinatra his first number one single in over a decade, “Strangers in the Night.” Unfortunately, the movie did not carry Sinatra’s imprimatur. The music in the film was an instrumental. Had Sinatra’s voice been heard in the movie it might have turned it into a hit.

For a long time, this under-rated delightful comedy was hard to find. There still is not a Region 1 DVD, but you can find it on Region 2 and YouTube has kindly provided a free copy.