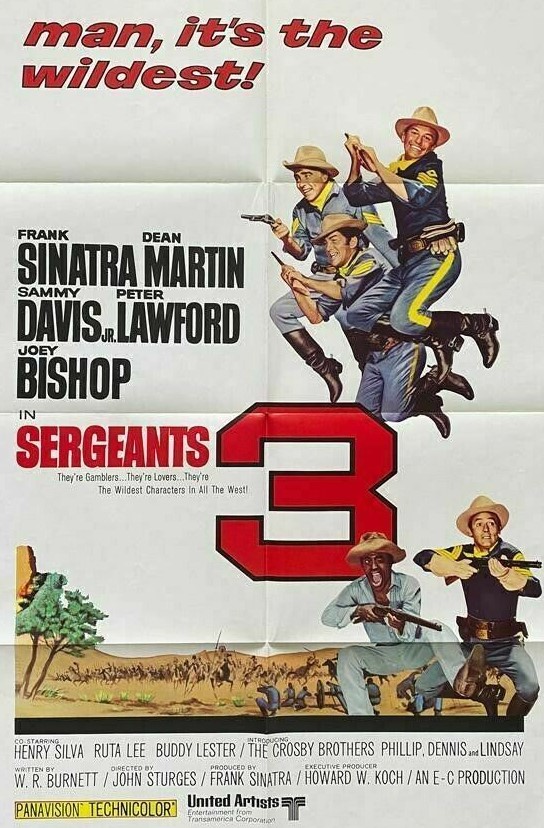 There’s a terrific western directed by John Sturges (The Magnificent Seven, 1960) inside this Rat Pack offering, the second of four in the series. On the plus side are plenty twists on traditional scenarios, Frank Sinatra and Dean Martin displaying a certain kind of easy screen charisma, and three exceptional and well-choreographed battle scenes.

Sinatra, Martin and Peter Lawford play the eponymous sergeants, Lawford committing the cardinal sin of wanting to quit the regiment to get married, with Sammy Davis Jr. as a former slave, bugler (an important plot point) and horse-lover wanting to sign up, and Joey Bishop (television star and occasional movie actor) as their sergeant-major boss.

A fair bit of time is spent on the usual Rat Pack shenanigans, getting drunk, brawling, playing tricks on each other, and exploring odd comic notions such as playing poker with a blacksmith’s implements as chips. But when it gets down to proper western stuff, it fairly zings along, with a decent plot (a Native American uprising) and excellent action scenes. You could have had William Goldman writing the script for the number of reversals involved as the picture keeps one step ahead of audience expectation.

When it sticks to action, the picture is very well done and involving. When Sinatra has to take charge instead of larking about, the movie has focus. Both Sinatra and Martin were undertaking serious roles around this time, the former in The Manchurian Candidate (1962), the latter in political drama Ada (1961) so this might have appeared welcome relief.

The comedy isn’t along the laugh-out-loud lines of Support Your Local Sheriff (1969) or Blazing Saddles (1973) and the action of so full-on you wonder why anybody thought this required comedy at all, although there is a pretty good punchline ending. Action aside, It’s almost the equivalent of easy listening. The Rat Pack was a particular 1960s institution, the members joining each other on stage in Las Vegas or featuring in television programs, but there’s no real modern correlative.

It was interesting to see how the Rat Pack concept developed. This movie chucked out the idea of including a few songs as with Oceans 11 (1960) while the next one in the series, 4 for Texas (1963) was more of a serious straight western. But the final picture Robin and the 7 Hoods (1964) went in the opposition direction and was a full-on musical as if by the time they came to making that picture everyone had realized the film would make more sense if it played to their inestimable talents.

The series developed in other ways, too. Romance was minimal in Oceans 11, barely seen here, but was a major element of 4 for Texas – who would want to waste the talents of Ursula Andress and Anita Ekberg – but just as Andress is a smooth operator in 4 for Texas when it came to the last Rat Pack picture Barbara Rush was also a significant player for whom romance was merely a means to an end. You could also argue that the disappearance of Lawford and Bishop allowed the supporting roles to be played by actors who were not in on the joke.