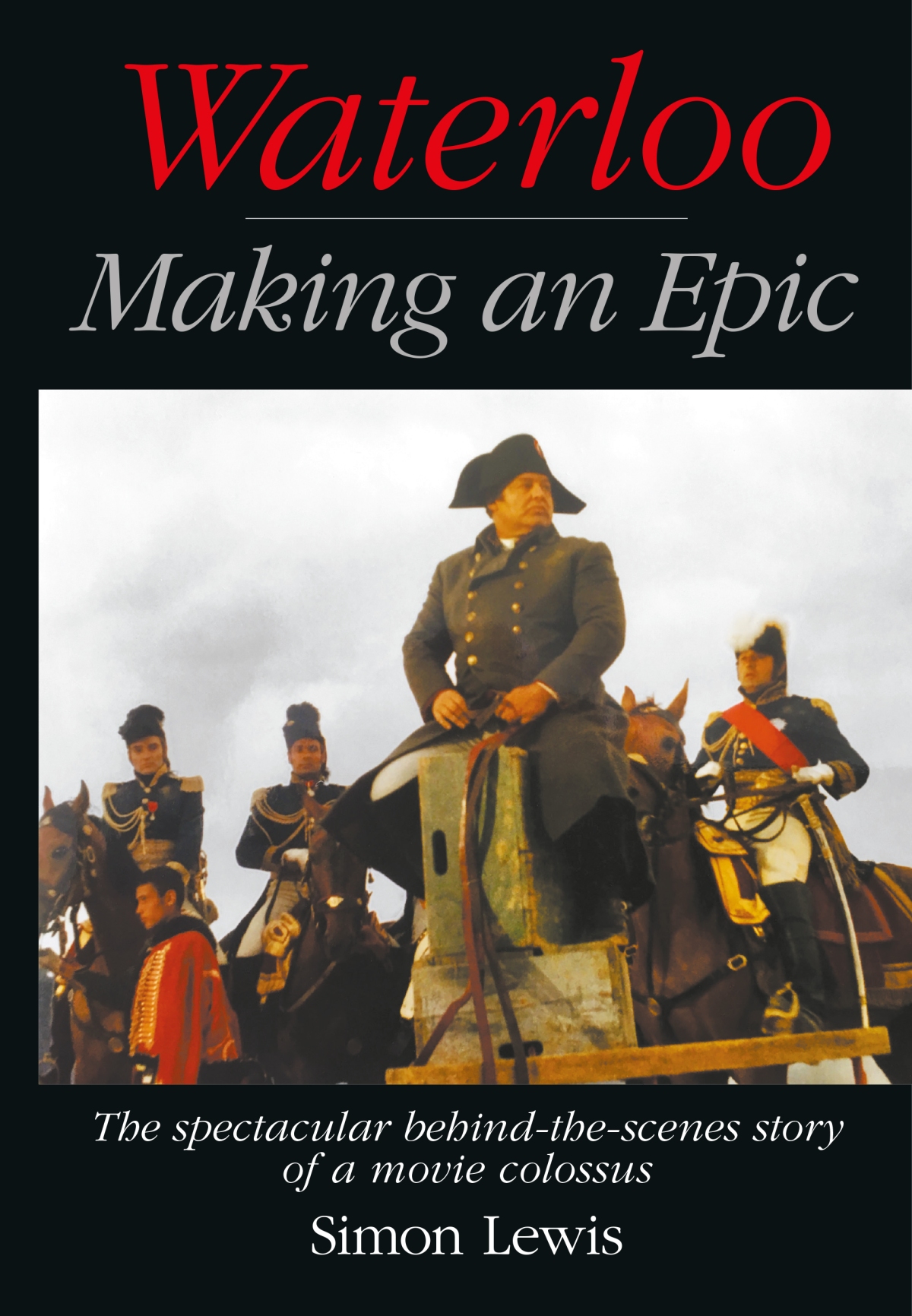 As dramatic a box office flop as this movie scarcely deserves a book as superb.

In quite extraordinary detail, author Simon Lewis discusses every aspect of the making of the film, from initial set-up to release, by way of analysis of dozens of separate scenes through to rarely discussed elements like the editing and mixing, and even the myth of the missing longer version and the importance of wooden boxes (as illustrated by the front cover).  It might have helped the movie’s commercial chances, and not put too much of a dent in the ultimately massive budget of $26.1 million, if producer Dino De Laurentiis has snagged original dream team of Richard Burton (Napoleon) and Peter O’Toole (Wellington), both of whom carried much greater box office marquee than Rod Steiger and Christopher Plummer.

Burton was never really a possibility but by 1968 O’Toole was “practically set” although turning it down because he thought it would flop. John Huston, who had just completed The Bible (1966) for De Laurentiis, was original choice for director and got so far as being involved in the screenplay being written by H.A.L Craig (Anzio, 1968). When he dropped out, Gilles Pontecorvo (The Battle of Algiers, 1966) was briefly in the frame. However, a six-hour version of War and Peace (1965) put Sergei Bondarchuk in pole position.

Requiring thousands of properly trained and preferably “celluloid-seasoned” troops to carry out disciplined manoeuvres rather than extras, De Laurentiis was in negotiation with Turkey, Hungary, Yugoslavia and Bulgaria before plumping for Russia, whose production arm Mosfilm pumped in $8 million (later rising in line with budget increases). Paramount and Columbia contributed a combined $7 million with worldwide rights selling for a total of $25 million. Once filming began, Paramount chiefs Charles Bludhorn and Robert Evans, watching elements of shooting, were so taken with what they saw they wished they had invested more. Evans was reportedly “enthralled by hours of film material.” Craig’s screenplay was augmented by the director and Vittorio Bonicelli as well as uncredited contributions by Jean Anouilh (Becket, 1964), Samuel Marx and Edward O. Marsh, not to mention additions by the two main actors. Steiger pocketed $385,000, Plummer $300,000, Craig $121,000 but Anouilh only $21,000. Gordon Highlanders pipers and drummers picked up £7 a day.

Lewis is at his best when forensically examining particular scenes, for example, the Duchess of Richmond Ball which used 4,000 candles inserted into candelabras, the slightest draught causing these to melt and drip wax on performers, a carpet used to get camera shots from a very low level.

Steiger played Napoleon almost as a dead man walking, having got hold of a copy of the French Emperor’s autopsy which revealed advanced cirrhosis and gonorrhoea. Steiger and Bondarchuk met the night before to iron out ideas for the following day but Steiger was not above forcing the director’s hand by in one instance the actor removing his trousers to ensure he could only be shot in close-up. Orson Welles matched Steiger in trickery. Only hired for two days, Welles extended his employment by insisting on doing his own make-up which of course was never up to scratch and required amendment. And in terms of movie trickery, Steiger was required to sit on a wooden box on his horse to ensure he could be kept in focus. Jack Hawkins dispensed with the horse altogether – he was either atop a box or on top of stilts, as he was unsteady on an animal.

In the absence of CGI of the kind Ridley Scott could employ for his battle scenes, the real soldiers were occasionally augmented by mannequins. Five thousand were made, two real soldiers at either end of a row held eight mannequins in place by the use of a single wooden plank which “allowed all regiments to march forward.” Among the many wonderful candid pictures in this lavishly illustrated tome – 200 photographs, many never seen before – is one of three girls staring at the mannequins as well as photos of Steiger and Hawkins on their boxes.

The Waterloo battlefield had one of the biggest sets ever built. A total of 17,000 soldiers, mostly from Siberia and  including 2,000 cavalry, lived in a tented city a mile away. Steiger noted: “It would have taken assistant directors three days to put untrained men, mere extras, into position. When they broke for lunch it would be another three days to arrange them again. These guys are superb.” Real soldiers working with their actual commanders was the difference between waste and superb. Having a general in charge of the troops often created issues. Bondarchuk would select the horses he wanted based on the effect he wished to achieve with the light, demands often obstructed by the commander if it meant the chosen horses had not been properly fed. “I will order soldiers – but how do I order animals?” was the dry comment from the army chief. .

Although the battlefield was primarily authentic  – mud for one scene created by pumping two days’ worth of water into the soil before cavalry churned up the area – there were occasions when filming conformed to the Hollywood norm. “The use of fiery explosions had been cinematic shorthand for battle scenes long before Waterloo” when in reality these would be minimal. “Most ammunition that was fired comprised large iron balls and so low was its speed it was possible to watch their progress.”

The famous charge of the Scots Greys was described thus in the script: “they came straight into camera – like centaurs in their magnificence.” The sight of 350 Arabian mounts travelling at breakneck speed was captured by use of a specially constructed railway powered by a diesel locomotive. Five cameras were sited in different positions on the train. The famous slow-motion effect – possibly the most exhilarating moment in the picture – was achieved by over-cranking the camera at 100 frames per second which slowed down what you saw by a factor of four.

Perhaps the best reveal regarding movie trickery was the moon above Wellington as he rode past the carnage. It comprised “special silver paper for front projection – 3M – like shark skin. You put one light on it and it reflects ten times brighter.” The moon was shown as one quarter less than full since the effect of a full moon would be harder to carry off. “Blue ink made some spots as moon craters.” The fake moon was suspended with one wire on top and two left and right to prevent it from moving, then one light was projected onto it.

Lewis rebuts the myth of the missing longer version. He reckons this probably came about because over 300,000 feet of film – 55 hours – was shot and the first rough cut was five hours long. The final cut was 133 minutes – not much longer than if you had worked out the length by counting the pages of the screenplay – and release cuts varied because, for example, the British censors cut out 28 seconds of horse falls and the ending includes 50 seconds of music over the credits. It was never shown with the intermission which was de rigeur at the time for longer roadshows and would have, artificially, inflated the running time.  There was some confusion over the final print because a novelisation by Frederick E. Smith included some scenes that didn’t make it into the final print, and Smith’s book, written of necessity before the film appeared, would have used as its main reference tool the screenplay. But Lewis spends a whole chapter explaining why a longer cut never existed.

The world premiere was held on 26 October 1970 in London where the movie released as a roadshow (i.e. separate performances) was a huge success. It ran for a few weeks short of an entire year in the London West End, breaking box office records at the Odeon Leicester Square and the Metropole where it opened on December 3rd, 1970, before shifting to the Columbia on June 17, 1971, and then a final week at the Odeon Kensington from September 30 1971. But audience appeal in the United States was at the other end of the spectrum. It went from a strong opening week of $25,436 at the Criterion in New York to just $1,775 in its fourth week, and nationwide racked up only $1.4 million in rentals (the studio share of the box office). It was derided in France in part because the film was about the defeat of a legend and the French could not come to terms with the idea that it was directed by a Russian.

Where most “making of” books concentrate on the stars and the director, Lewis goes into fantastic detail about all aspects of the production, the chapter on editing and mixing an education in itself. There’s a chapter on how historically accurate the film actually was. The author was helped by the discovery of a diary kept during production by actor Richard Heffer who played the small part Mercer. But Lewis also managed to make contact with Dino De Laurentiis’s daughters, Raffaella and Veronica, and around two dozen people connected with the film in some way, and clearly examined every scrap of information available on the picture. The Notes are another mine of information.