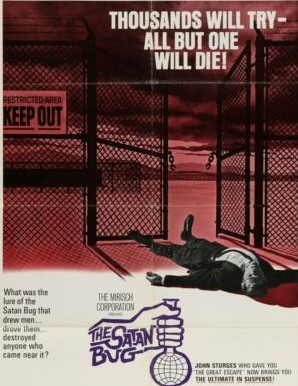 In 1963 John Sturges made a deal for his Kappa Productions outfit with United Artists.  The director was keenest on The Hallelujah Trail (1965) and what became Hour of the Gun (1967) but The Satan Bug was greenlit first because of the production difficulties inherent in developing westerns. To cut down on travel, Sturges decided to shoot in and around the desert area close to his home turf of Palm Springs and the Joshua Tree National Park. He called in James Clavell, responsible for the screenplay of The Great Escape (1963), and Edward Anhalt (Becket, 1964) to Americanize  and update the English-set Alistair Maclean thriller written before the Cold War escalation of the Cuban Crisis and the increasing fears of nuclear arsenals.

Hardly a director known for “message pictures” – more likely to emanate from the likes of Stanley Kramer – nonetheless he recognized the implicit threat of biological warfare for “its terror potential” and envisioned a powerful climax in the evacuation of Los Angeles. He swapped the married, lame and disfigured hero of the novel for a hip loner in the Steve McQueen mold.

Unable on a $6 million budget to afford a leading man of the McQueen calibre – a strange notion when Two for the Road’s $5 million budget included $1 million for Audrey Hepburn – he settled on rising star George Maharis (Quick Before It Melts, 1964) who had graduated from television’s Route 66 (1960-1963). “We were disappointed that we were not able to get a major star to play the leading role,” commented producer Walter Mirisch, whose company Mirisch Pictures bankrolled the picture. “The idea of using… George Maharis was suggested… John (Sturges) pressured us to cast him. I had felt the subject required a major action-adventure star. George Maharis wasn’ t that, nor did he ever become a major shooting star. ”

Richard Basehart was also plucked from television – the star of Voyage to the Bottom of the Sea (1964-1968) – as was Frank Sutton (Donald in the film) from comedy Gomer Pyle, USMC (1964-1969). Initially cast as the general’s daughter, Joan Hackett (The Group, 1966)   – in what would have been her movie debut – was replaced by Anne Francis. In fact, Hackett worked on the movie for two weeks. “John called,” explained Mirisch,” and told me he was very dissatisfied with Joan.” Sturges had worked with her replacement Anne Francis before on Bad Day at Black Rock (1955).

Sturges biggest problem was creating imposing research facility Station 3. Sticking it underground saved a chunk of cash on the budget, since interiors were minimalist. “The set cost us nothing,” said Sturges. But to add a sense of tension, the set was lit with an ominous amber glow.

However, it proved impossible to achieve the one effect Sturges had set his heart on – the panic-crazed evacuation of Los Angeles. City officials put a block on the gridlock called for in the script. Recalled Sturges, “The sons-of-bitches wouldn’t let me stop traffic…we didn’t get the panic on the streets, the motorists trapped on the freeways…the nightmare of the evacuation.” The director was forced to resort to “glass shots” and background noise to create the sense of pandemonium, the gridlock limited to the roadblock.

Also hampering production was a sense that the director’s mind was not fully on the job. Screenwriter John Gay (The Hallelujah Trail) was often on set conferring between shots with Sturges. The laughter they enjoyed dreaming up ideas for the comedy western seemed at odds with the mood of the pandemic thriller, leaving some actors annoyed.

Commented Mirisch, “It never developed any momentum on its (U.S.) release and wasn’t successful commercially.” According to the Mirisch internal records, the picture’s negative cost (excluding marketing and advertising) was $1.78 million. It only brought in $850,000 in rentals from the U.S. release though foreign business was better, $1.75 million, but the combined total was not enough, once the promotional costs were included, to turn a profit.