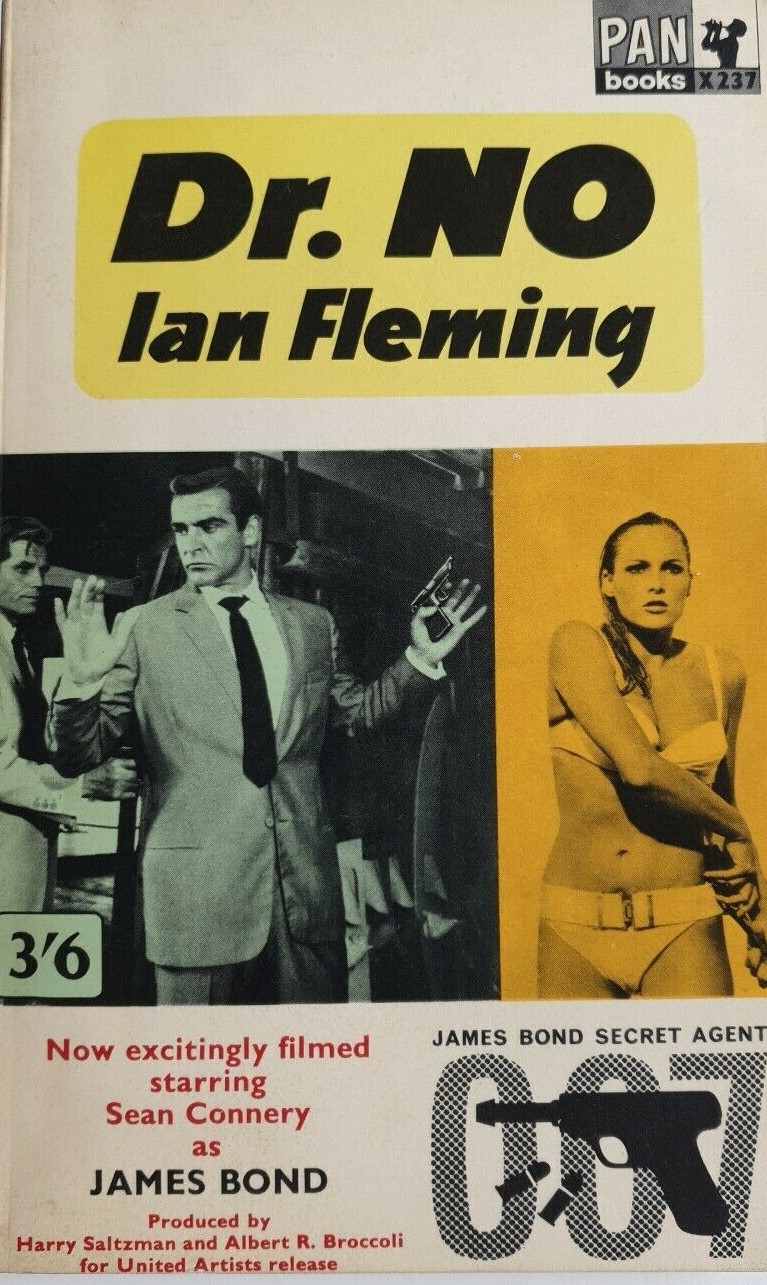 If the screenwriters had faithfully adapted the book it would be death by centipede that faced James Bond in his bed. Never mind that a centipede would be nobody’s idea of a scary creature, the insect would have been impossible to replicate on screen. The idea of a poisonous spider being slipped under Bond’s covers was filched from Honey Rider’s past. In the film she recounts how she killed a rapist with a knife, but in the book she employed a black widow spider.

Nor would the idea of Dr No making his fortune from bird shit (guano) seem to carry much appeal, so that was changed for the film, and that forced an alteration to the ending as well for Ian Fleming has the villain drowning in a pile of guano. And in that context, Strangways’ investigation of the island relates to rare spoonbills (a type of birds) not rocks.

So the myriad team of screenwriters –Richard Maibuam (The Day They Robbed the Bank of England, 1960), Johanna Harwood (Call Me Bwana, 1963), Berkely Mather (The Long Ships, 1964), Wolf Mankowitz (The Day The Earth Caught Fire, 1961) and director Terence Young – chopped, changed and invented to turn the sixth James Bond novel into the first James Bond film. In publication sequence, this followed From Russia with Love in which Bond had a particularly dangerous encounter with Rosa Klebb, and at the start of the Dr No episode has been recuperating from being poisoned. The Jamaican mission is seen as something of a convalescence, a way to ease Bond gently back into the field, a trip so lacking in urgency that three weeks have passed since the disappearance of Strangways and his secretary.

Naturally, the scriptwriters have to cut to the chase more quickly than that, hence Bond being despatched immediately. Needless to say, there is no dalliance with a certain Ms Trench, that being a screenwriters invention, along with the scene in the casino, inserted in order to punch up the Bond screen legend. Not only is there no dodgy chauffeur waiting for Bond at the airport but Quarrel is introduced immediately as an ally not an opponent. While the female photographer is a genuine freelance, she does scrape Quarrel’s face with a broken flashbulb and delivers a warning about Dr No.

Bond’s tradecraft extends to closely examining the basket of fruit in his room and sending off samples for analysis, and finding they contain cyanide. But the book contains no Professor Dent, Felix Leiter or Miss Taro, and no other attempts (beyond the centipede) on Bond’s life  so the story in some respects moves more straightforwardly towards the mysterious island.

As with the film, Bond arrives on the island with Quarrel. But Honey Rider does not appear in dazzling style out of the waves. Bond first catches sight of her from the back. But she is nude and has a broken nose, two provisos that would not go down well either with the censor or a cinematic audience. Much of their dialogue, including the stuff about learning from encyclopedias comes from the book, but her backstory is completely different. Instead of her father being a marine zoologist, he is dead and her once-wealthy family destitute, leaving her to fend for herself, and considering entering prostitution to make a decent living.

The arrival of Dr No’s speedboat and the ensuing gunfire, the destruction of her boat, the chase and the “Dragon” all come from the book, as does Dr No’s million-dollar aquarium, his steel hand, and the opulence of the prisoners’ accommodation. However, there being no radiation in the plot for the book, there is no requirement for them to be stripped naked once captured.

But in the matter of the clear sexual attraction between Bond and Rider, the book and the film are at variance. In the original Fleming version, Rider, although initially resisting his overtures to the extent of dumping cold beans on his hand, is soon making the running, inviting him to share her sleeping bag, an offer which he rejects. Surprisingly, the usually rampant Bond further resists her allure once inside the Dr No compound on the grounds that he has to “stay cold as ice to have any chance of getting out of this mess.”

The screenwriters come up with completely different plot for the climax while incorporating some elements of the book’s ideas. While Dr No remains the same power-mad maniac, his plan is to turn the island into the most important technical intelligence center in the world with the ability to take control of  U.S. rockets and point them at London.

In the film we briefly see Rider tethered to stakes awaiting the crab onslaught before Bond races to the rescue. But, in reality, in the book Dr No’s assumption that death by crabs would be a terrifying ordeal is somewhat misplaced. As Rider points out, she never felt in any danger because crabs are simply not carnivorous. But both book and novel are agreed – they do have sex at the end.

While the screenwriters use elements of the book it is primarily their inventions that turn the novel into an instant screen classic, defining Bond for generations to come. You can almost count the action beats, whether a chase or a fight or mere confrontation, with sex or humor providing welcome respite, but all moving in the same direction of creating a feel for a new type of character and a new kind of film.