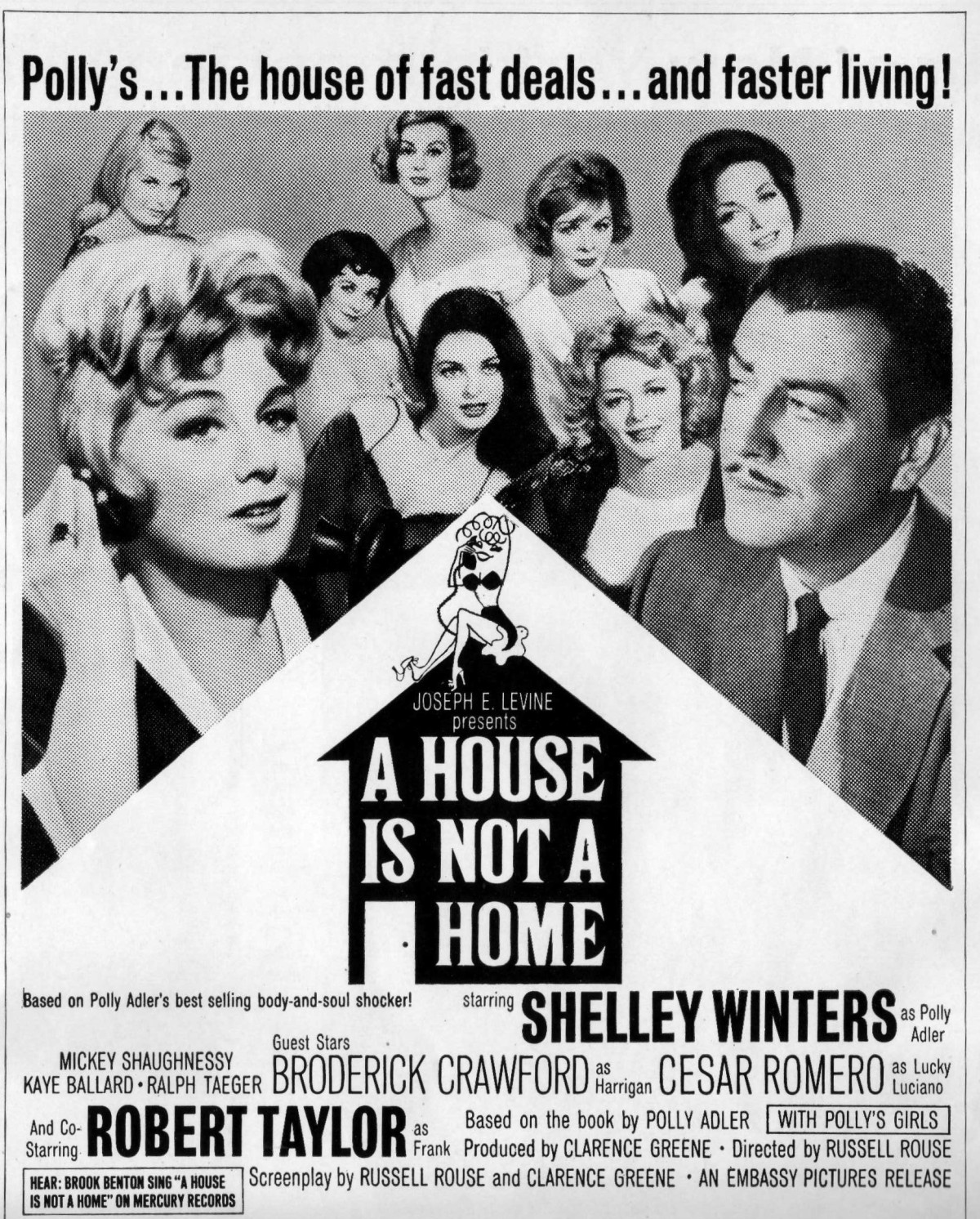 Selling sin had never been difficult in Hollywood, dating back to the Cecil B. DeMille silent epics and more recently when a series of films challenged the Production Code, the studio’s self-governing censorship system. In most films, however, sex had been a by-product of passion, a couple in love, or a glimpse of nudity. Nobody had ever attempted to foist onto the American public a picture about transactional sex, one that examined the basest elements of male desire.

If anyone could be relied upon to sell the unusual it was producer Joseph E. Levine, the master marketeer, who had spent millions to make millions with Hercules (1958) and more recently The Carpetbaggers (1964).  Only Levine had the audacity to market the picture as a “typical American success story” and present the Polly Adler, the New York madam at the center of the movie as “not a stereotype of a procurer” but as confidante of politicians and artists.

That at least was the upfront story, the version presented in the various articles peppering the Pressbook whose sole purpose was to win over the exhibitor. When it came to the public, the approach was a mixture of the imminently direct and the subtle.

In the straightforward department were a whole string of teasers under the headlines “She’s One of Polly’s Girls” featuring glamorous women in sexy outfits to soften up the potential moviegoer in advance. The women featured in virtually every advertisement to follow as “luscious playmates,” either taking center stage or in the background.

A graphic with an illustrated sexy women in little more than bra and panties sitting atop a house also appeared in several adverts. There were several ads along these lines and several different taglines.

“The story of a House of Pleasure…The woman who ran it…The beautiful girls who lived in it…The famous and the infamous who knocked lovingly on its door” set the tone.  Taking a similar approach was the tagline: “A motion picture for those who think they’ve seen everything and those who know they haven’t”  / “the body-and-soul shocker” / “Take a tour of New York’s most famous house! Meet the madam who ran it…the beautiful dolls who lived in it…the Johnnies whose ‘jack’ built it.” (“Jack” in this case meaning “money” in case your imagination runs to more lascivious ideas.)

Going down a more playful route, certainly subtle in comparison to the rest of the advertising, was a series of small ads that focused on aspects of an ordinary home – “the welcome mat is always out” / “the door is always open” – simple illustrations without sight of a sexy inmate.

Often promotional writers struggled to find enough interesting information to fill out a Pressbook but this was littered with fascinating snippets. Shelley Winters lived up to her reputation as a colorful actress by having thrown off the set a noted columnist, a photographer, a magazine writer and the film’s press officer – all in the one afternoon. Cesar Romero who plays gangster Lucky Luciano was born close to the gangster’s birthplace and had been gifted the underworld kingpin’s watch. Polly Adler, whose story the film tells, started writing her bestseller A House Is Not A Home as a thesis as part of a degree at UCLA and later took up painting.

Meri Welles, who essays suicide Lorraine, was actually in the property business, renting homes to movie stars like Rex Harrison. Broderick Crawford had previously won an Oscar as a crooked politician, similar to his role here, in All the King’s Men. Over 1,600 young hopefuls were auditioned over 18 days for the bit parts of Polly’s girls.

Leading the tie-ins was a new edition of the bestseller which had sold over 3 million copies. Brook Benton, then a top-selling pop star, had recorded the title theme by Burt Bacharach and Hal David which managed to avoid any mention of the type of house involved and there was always sheet music to add “promotional punch.” However, based on the notion of an ordinary house, exhibitors were encouraged to get in touch with household suppliers in order to run adverts along the lines of “a house is not a home without refrigerators” linked to the name of a local company.

However, the marketing team struggled somewhat to deliver the usual roster of gimmicks that could be applied by exhibitors, falling back on contests to complete a crossword and devise a limerick. Quite who dreamed up the idea of dressing up a promotional model in cap’n’gown and have her hand out diplomas inviting people to “meet the girls at Polly-Tech” was anybody’s guess and exhibitors might find it difficult to hire someone to parade the streets as a “walking book.”