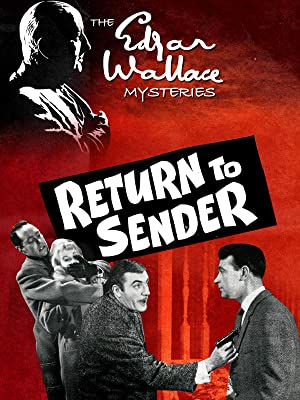 The B-film’s B-film. Where American B-pictures invariably focused on sleaze, sci-fi, horror or violence, their British counterparts often exuded class with solid acting, clever plots, excellent though simple sets and good composition. Edgar Wallace, the world’s most prolific writer, had regained sudden popularity thirty years after his death, and movies made from his works made ideal subjects for B-pictures fed into the British double-bill system. His thrillers are all story, racing along with twist after twist.

On the verge of being arrested for fraud, high-class businessman Dino Steffano (Nigel Davenport) hits on blackmail as a means of forcing investigator Robert Lindley (Geoffrey Keen) to drop the case. He sets up associate Mike Cochrane (William Russell) to fake photographs involving sexy Lisa (Yvonne Romain) and Lindley in compromising positions. So Lisa, pretending to hold vital evidence, lures him to her flat where this can be staged.

Meanwhile Lindley’s daughter Beth (Jennifer Daniel) chats up Cochrane after overhearing him asking questions about her father’s cottage. Cochrane has history with Lindley, an 18-month prison sentence the result of a previous encounter. He also resents Steffano over previous double-dealing and is planning to take his own revenge while carrying out the master plan.

I doubt if you will be able to see the twists coming. Suffice to say, nothing is what it seems. The closer Lindley gets to uncovering the mystery, the darker it becomes and the more danger he appears to be in. Even when characters reveal their plans, you can be sure they will have a different one up their sleeve. Steffano’s exceptional charm masks his ruthlessness. While Lindley is dogged, he is no match for the slinky Lisa who can play the vulnerable female with ease. Artist Beth treasures her independence so much that it takes her down some devious alleys, especially when trying to pump Cochrane for information. And it all leads to a terrific climax, involving further twists and double-dealing.

Most of this is played out in classy apartments with log fires burning and Steffano drinking brandy and smoking cigars, or on a yacht, or Lindley’s equally splendid chambers.

The cast are either up-and-coming movie stars or destined for small-screen fame. Many of these Edgar Wallace thrillers would prove stepping stones for new talent.

Making his movie debut director John Hales clearly benefits from a couple of decades as an editor in films like The Seventh Veil (1945) and Village of the Damned (1960) and he nips quickly from one scene to another to keep the plot ticking along while showing some gift for framing characters within a scene.

I should point out you will easily find flaws. Strictly speaking, if you know your British police procedural, Lindley would not be an investigator, and it would not be too hard to find strains of implausibility showing. But that should not detract from this enjoyable movie.

British studio Anglo Amalgamated churned out these Edgar Wallace thrillers as double-bill fodder and, even though compromised in the budget department, they were generally well-made. Wallace was a brand-name, the country’s best-selling author on account of his 200-plus novels, most still in print long after his death, and a byword for a good read. American networks edited the features down to fit into a television series. So if you are hunting these down make sure you get the original features rather than the edited versions.

You could try this sampler on Amazon Prime but if you like what you see you would be better to buy one of the box sets.