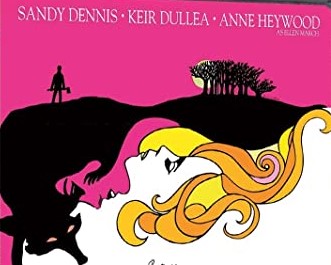 Based on a novella by D.H. Lawrence, The Fox, relocated to contemporary Canada, marked the debut of director Mark Rydell. Originally, Alan Bates (Georgy Girl, 1966), Patricia Neal (Hud, 1963) and Vivien Merchant (Alfie, 1966) were in the frame for the three roles.

Instead, the trio were Sandy Dennis, Keir Dullea and Anne Heywood. Dullea’s career was at a dead end after flops The Thin Red Line (1964) and Bunny Lake Is Missing (1965). Former beauty queen Heywood had been a Rank starlet which resulted in small roles of no distinction until marriage to the film’s producer Raymond Stross improved her prospects. The main marquee attraction was Sandy Dennis who had won the Best Supporting Actress Oscar for Who’s Afraid of Virginia Woolf (1966) and starred in drama Up the Down Staircase (1967).

But it was a low-budget enterprise all the way. Dennis and Heywood play spinsters running a chicken farm in rural Canada, home-body Dennis the more introspective and content, task-oriented Heywood self-sufficient but sexually frustrated. Dullea is a merchant seamen who visits the farm in search of his grandfather, now deceased. Allowed to remain, his presence threatens their lifestyle and forces them to confront the intensity of their suppressed feelings towards each other.

Although a real fox is causing trouble, Dullea is the symbolic fox in the symbolic hencoop. Rydell displays considerable confidence in his material. It is very atmospheric, the natural backdrop, early morning sunsets and wintry chill in the air adding a certain tone, with the isolation providing a thematic template. The tiny cast creates a sense of intimacy as well as tension and the acting is uniformly good.

George Roy Hill might well have purloined his freeze-frame ending in Butch Cassidy and the Sundance Kid from an idea Rydell employs here, one of only two effective stylistic devices in an otherwise highly-controlled piece. The only directorial downsides are a couple of instances of unnecessary melodramatic music when otherwise Lalo Schifrin’s gentle theme is perfectly in keeping with the picture’s mood.

Made on a budget of buttons and reliant entirely on acting skill, this is one of the decade’s low-budget triumphs, not least for its sensitive treatment of its subject matter.