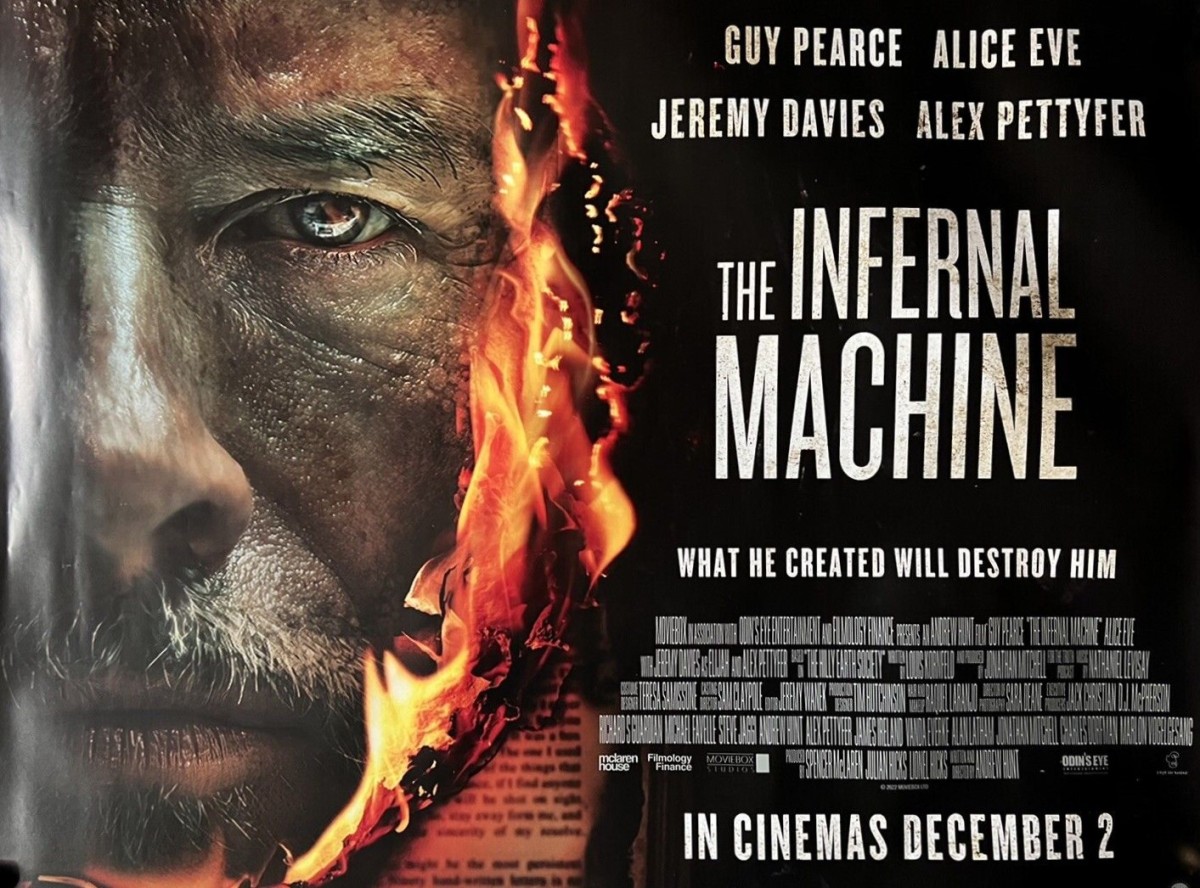 Enigma and irony are hard enough to pull off in a drama never mind an intellectual thriller that plays around with reality. So full marks for a terrific performance by Guy Pearce (The Seventh Day, 2021) holding together a relatively simple tale of paranoia, and writer-director Andrew Hunt (The Miles Between Us, 2016) for teasing it out.

Author Bruce (Guy Pearce) has written a bestseller that triggered sociopath Dwight Tufford (Alex Pettyfer) into carrying out a mass killing. Hiding out in a remote cabin away from any feeding frenzy, and drowning in alcohol, he’s nonetheless being stalked by obsessive fan William Dukent who sends him daily missives by post, conveniently attaching a contact number but infuriatingly never answering his phone. Aware how obsession can end (for example, in mass murder), he’s none too keen on meeting said fan, and is armed against intruders.

That his mental health is imperilled suggests some deeper psychological problem since beyond irritation there is no obvious threat. Ad bearing in mind he’s an alcoholic, there’s always a possibility his nemesis is himself. Before he achieved fame he was your standard creative writer teacher so we’re regaled in flashback or voice-over with some of the rules of writing, but what appears mere filler material takes on deeper meaning in the third act.

What makes this transparently different from your standard paranioa thriller is that Bruce is hardly equipped to hunt down bad guys, possessing none of the “particular set of skills” possessed by the likes of Bryan Mills (Taken, 2008), and no military background to call on. It takes him forever to even work out that the name of his antagonist is actually a clue.

Eventually, he is assisted in his endeavors by cop Officer Higgins (Alice Eve) but nothing makes much sense and he deteriorates further into an alcoholic haze. Even while every step forward turns into a step back, at least he is on the case. And then the twists come thick and fast.

I’m a pretty big fan of twists and because I generally watch twist-ridden pictures am inclined to go with the flow, though not without trying to figure the puzzle in my own mind. But when the final parts of this particular jigsaw unfold they are of the unexpected variety. If I tell you any more I’ll give the game away.

So, primarily, it relies on a somewhat incoherent fellow trying to find coherence in a world that has to all extents and purposes betrayed him. After years of rejection, he has finally grasped the brass ring (if that’s what you do with brass rings) filled with awards and a mass of cash (enough at least to fund this retreat and heroic alcohol consumption). Whatever his book has triggered in the mind of an assassin is never made clear; the novel is about a priest who disproves the existence of God. And given it’s impossible to understand the deranged mind, that could just leave him a victim of circumstance, in a perfect storm of angst, and all the while trying to determine how, as befits a writer, this chimes with his own personal narrative, every individual being the hero of his own tale.

As I said, it all hangs on the performance of Guy Pearce who’s been here before in Memento (2000) and he creates a believable contradiction, intelligent enough to try to make sense of his stalker but at the same time arguing with a telephone answering machine.

Only a couple of sections are questionable, how to engineer an escape from a super-maximum security prison and how Bruce would know the capabilities of a bullet when not fired from an actual gun. But by that time you’re already along for the ride.

Andrew Hunt doesn’t give much away until he has to and it’s to his credit that we care so much for an isolated character minus the standard wife or daughter there to generate  audience empathy. Given the hero is not a particularly likeable character, it’s no mean feat to get us on his side, especially when he dips into philosophy and tips on writing. Hunt devised the screenplay from a story by Louis Kornfeld, who originated the source material, the wonderfully-titled The Hilly-Earth Society, for a podcast.