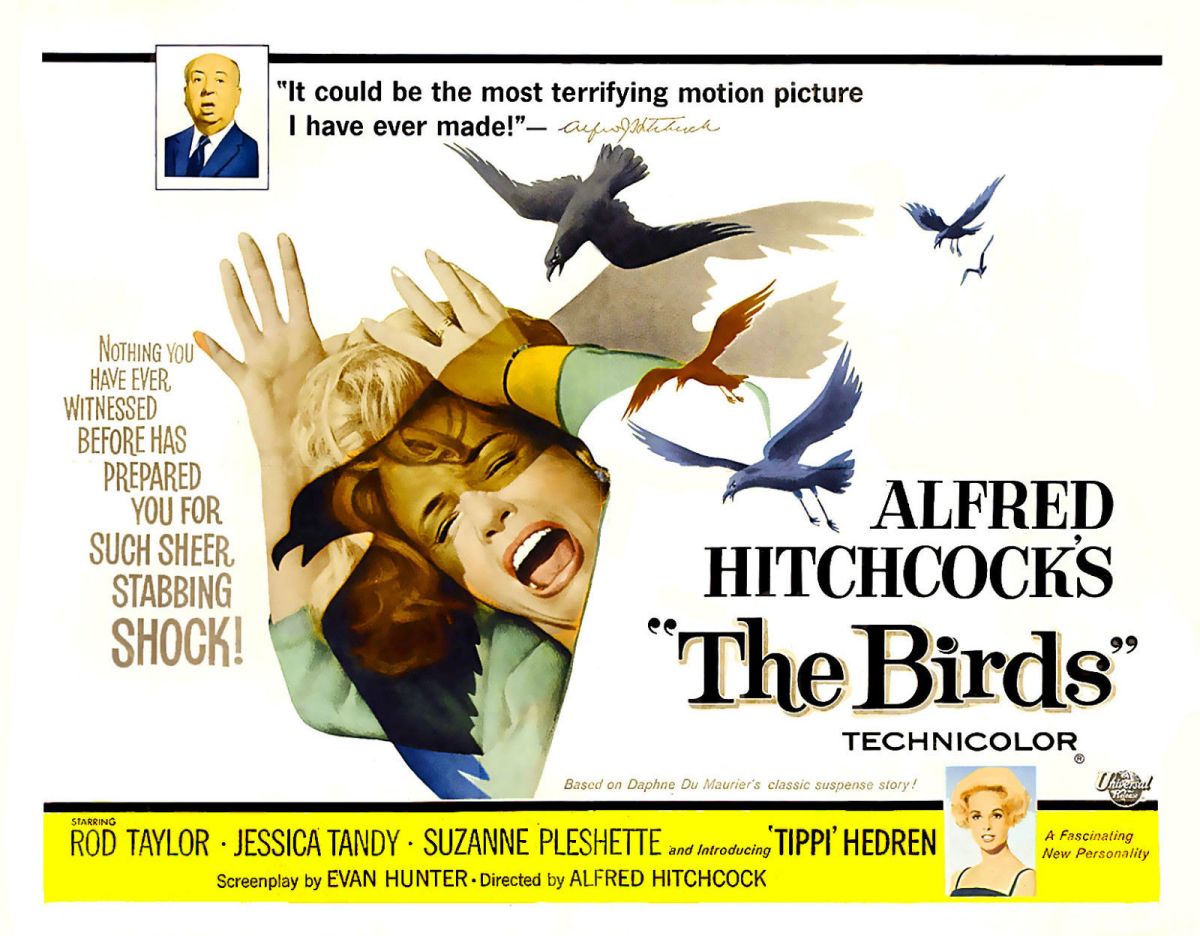 Years ago I was asked to write a book on the six best Hitchcock films and from those choose the one I considered his very best. My choice was The Birds (1963). And it is for these reasons.

Firstly, unusually in the master’s work, there is a proper meet-cute. In most of his films, the couple are either already together (Rear Window, 1954; Torn Curtain, 1966) or when they get together it is for a hidden reason, one is on the run, or being pursued by the other, and the getting together is a convenient way of reaching an ulterior goal. When Melanie (Tippi Hedren) and Mitch (Rod Taylor) meet in the pet shop it is a certainly a precursor for the future and ensures that Mitch gets in a stickier jam he would otherwise likely have avoided but in the true sense it is the traditional Hollywood boy-meets-girl.

Secondly, and now cutting more to the chase, this is where the modern action film was invented. You might think that honour rested with Dr No (1962) or any other of the Bond pictures or even as late as Bullitt (1968) with its epochal car chase. But although the Bonds are filled with derring-do and escape, there is nothing to match the scene when the birds attack the town, wave after wave, as if they were World War Two bombers. There is even the point-of-view from the air which Hitchcock also invented and has been repeated in airplane war films ever since, most famously Pearl Harbor (2001).

But the way in which full-scale disaster, with everyone rendered helpless, unfolds is a true first. People in the café can see the river of petrol and the match about to be discarded and can only observe as the river of flame reaches the petrol tanker and in a perfectly ordinary town setting – rather than a military base – there is an almighty explosion. It is terror for the sake of it. And there is no escape, no one racing to the rescue, just pure devastation,

Lastly is the ending. It is apocalyptic. In every other Hitchcock when the hero/heroine escapes from dire peril, that is the end of the matter, there is no final twist as with a film like Carrie (1976). But although the birds are now silent and the couple can pick their way through their lines, you know full well this is not the end and that the birds will soon be as inexplicably massing somewhere else.

That’s three reasons but there are many more. For a start, in other films where the hero/heroine is in danger, the peril is not relentless. And often it is the threat of danger or of being captured that provides the narrative spring. And if there is physical threat in that era it was not unrelenting. And it is with another character whom you can fight or at least attempt to outwit. Not just, later in this instance rather than sooner, realize that there is no way to defeat these marauding creatures, no way at all. So, compared to his other films, when attacks of one kind or another punctuate a film, here it is like a battery of machine-guns and not episodic but virtually non-stop for over 30 minutes.

The storyline since it is after all a meet-cute is excessively simple. Melanie and Mitch meet, trade remarks, she leaves him what would easily be interpreted as a love token, and they link up after she is attacked by a gull. Wherever they go now, there will be no escape. Gulls attack children playing outside. The same day sparrows invade Melanie’s home. There is another attack on children. In town the gulls swarm in wholesale, wreaking the devastation mentioned above. All his is just a prelude to the final overwhelming siege. Except in modern horror pictures where a body is dispatched every ten minutes or so, there is  nothing to match the unremitting attacks. It is as though Mitch and Melanie are in the front line of battle, under siege, Zulu (1964) with birds perhaps, but with no hope of salvation. Unlike Zulu, there is no sign that in raising the siege, the birds are hailing their bravery.

Unusually, too, for a Hitchcock film, there is considerable back story that informs current action. Mitch has an overbearing mother who seems to hover over his life attempting to scare off any woman who comes near. Annie has been left behind precisely because he needed to escape his mother. For her part, Melanie’s mother ran off with another man and she is a spoiled socialite with a habit of getting into trouble, possibly attention-seeking behaviour as a result of abandonment issues. Full to the brim with sophistication. Melanie is the least likely candidate for motherhood, yet her maternal feelings rush to the fore when she has to care for a terrified child.

Tippi Hedren’s career when south when she parted company with Hitchcock so we only have this and Marnie (1964) to consider her worth as a star. This is easily her best performance, shifting from icy cold to playful to romantic to maternal and of course no one has quite emoted such shock and terror. This is Rod Taylor (Dark of the Sun, 1968) coming into his stride as a leading man. He always had the charm and certainly the brawn, but rarely displayed both in the one picture. You would not have picked the Rod Taylor of Seven Seas to Calais to lead a squad of mercenaries in Dark of the Sun but he might well be first pick after this performance.

Hitchcock got so many of his effects by laying on the tension, a man or woman on the run, an innocent framed, a man displaying dubious morality (Rear Window, 1954, and Vertigo, 1958) nonetheless being presented as hero, the question in every instance being whether they will escape their fate. Here, the barrage of devilry is so intense it is almost inconceivable that anyone could get out alive. That they sneak out by the skin of their teeth, watched by their silent conquerors, for me was only the prelude to The Birds Part Two.