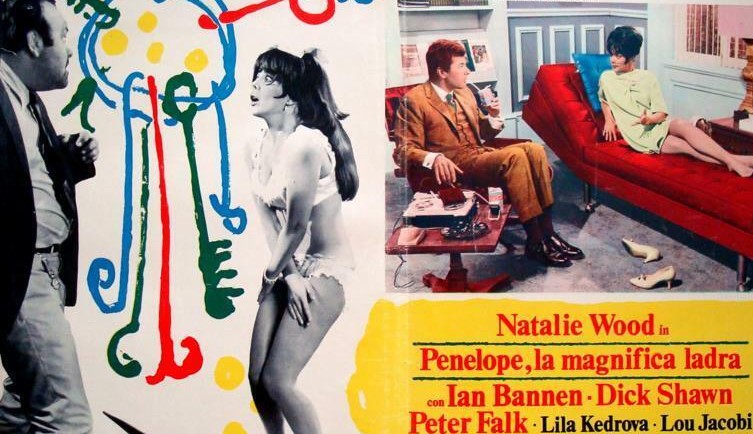 Marketeers quickly got a fix on how to sell Penelope: have star Natalie Wood holding up a bag of cash in each hand. The fact that in the most prominent of the three advertisements (a rather modest amount for movies in this decade) she was clutching the moneybags to her chest and dressed in only a bikini in what was undeniably a sexual pose could have been pure coincidence I suppose. In the second advertisement she was fully dressed and more stylishly posed in front of an open safe. The third less widely-used advertisement dispensed with the body, a head shot of her waving a wad of cash in one hand and a gun in the other.

The bikini advert features the other main characters in a variety of weird poses in comic fashion. “She’s Public Entertainment #1” ran the main tagline. Below that came: “That’s Penelope – the slick stick-up chick …and she’s leading the merriest men the hottest chase from safe to sofa” which in fact pretty much captured the storyline. A variation on the bikini ad was simply headlined: “She’s the world’s most beautiful bank-robber” – and you couldn’t argue with that either. Those two subsidiary taglines appear on an alternative bikini ad which shows four scenes from the film with a different catchline: “Attention! Put your hands in your pockets. If you find anything missing…Penelope probably took it.” The fully-dressed advertisement uses exactly the same sets of taglines.

Established stars were the hardest to find anything new to write about, hence the editorial on Natalie Wood only appearing on page four of the 16-page A3 Pressbook. For the picture she received one of the “most lucrative contracts ever given a young actress” plus fringe benefits like four dressing rooms. It was unusual for a big Hollywood star to harbor so many unfulfilled ambitions. “There are still so many doors to be opened,” she revealed. “I have only started. I want to try everything, perhaps appear in a foreign film or two. And I hope some day to make a stab at the Broadway stage.” Ironically, her aspirations resulted in her not working in Hollywood for another three years.

For some reason the marketeers felt it necessary to butter up New York’s Mayor Lindsay,  pointing out that the unit on location spent $15,000-$20,000 a day in the city, cast and crew housed in six floors of the Plaza Hotel, the basic cost swollen by the crew’s “thirsty eagerness for New York theater, ballet, museums, restaurants, night clubs.”  Two hundred extras a day were employed. Some playing policemen got into trouble for giving the cops a bad image by smoking while waiting to be called into a scene, passers-by mistaking them for the real thing. Locations included a sculpture garden in the Museum of Modern Art and a “beatnik joint” in Greenwich Village.

Fact-checking was rarely a priority for Pressbook compilers who here managed to geographically reposition Ian Bannen’s home from the Isle of Wight on England’s south coast to Wales. “This was my first venture into slapstick,” said the actor, better known for dramatic fare like The Hill (1965) and The Flight of the Phoenix (1965).

Inadvertently, the Pressbook revealed secrets about Hollywood release schedules. Prior to making Penelope, director Arthur Hiller had been previously working on World War Two picture Tobruk. Yet Penelope hit theaters first – in November 1966 while Tobruk was delayed until February 1967. Hiller had fun with “weird” camera effects. “There are scenes in which we seem to have out-Dalied Dali.”

Oscar-winning designer Edith Head came up with what she termed a “schizophrenic wardrobe” for Natalie Wood, representing the two sides of her character, the stylish wife of a wealthy man and the larcenous opportunist. In one wardrobe were clothes representing “high style, comprising beautiful furs, discreet suits, svelte cocktail dresses and sophisticated evening gowns, all expressing financial worth.”  The other wardrobe, designated “way out,” suggesting the freedom from inhibition which Penelope strives so valiantly to achieve, comprised, among other items, “a wisp of a shortie nightgown in 14-carat gold and a negligee of golden coins,” a French lace number worn over “a nothing of a mini-bikini” and a red lace nightgown.

Peter Falk, playing a cop soft on Penelope, would not have been in the picture except that his television show The Trials of O’Brien was cancelled. Forty-eight hours later he was hired for Penelope, a week later signed for a television special of Brigadoon (1966) and shortly after won a big role in Luv (1967), taking second billing to Jack Lemmon.

The $250,000 spent on Natalie Wood’s wardrobe provided ample scope for marketing tie-ins with fashion stores, hair stylists and shoe departments. Given the nature of the movie, it was inevitable that the marketeers suggest that exhibitors make up “Wanted” posters and plaster them around town especially at post offices, banks and police stations. Reflecting the  psychiatry element, one other marketing route was for exhibitors to tie up with a furniture retailer to promote the kind of couch a patient might lie on. Among other ideas touted to exhibitors were a limerick contest, a senior citizen competition and a tie-in with a local bank.

While the Pressbook promoted a soundtrack album that included Natalie Wood singing “The Sun Is Gray,” there was, unusually, no mention of the paperback of the book by E.V. Cunningham on which the movie was based.