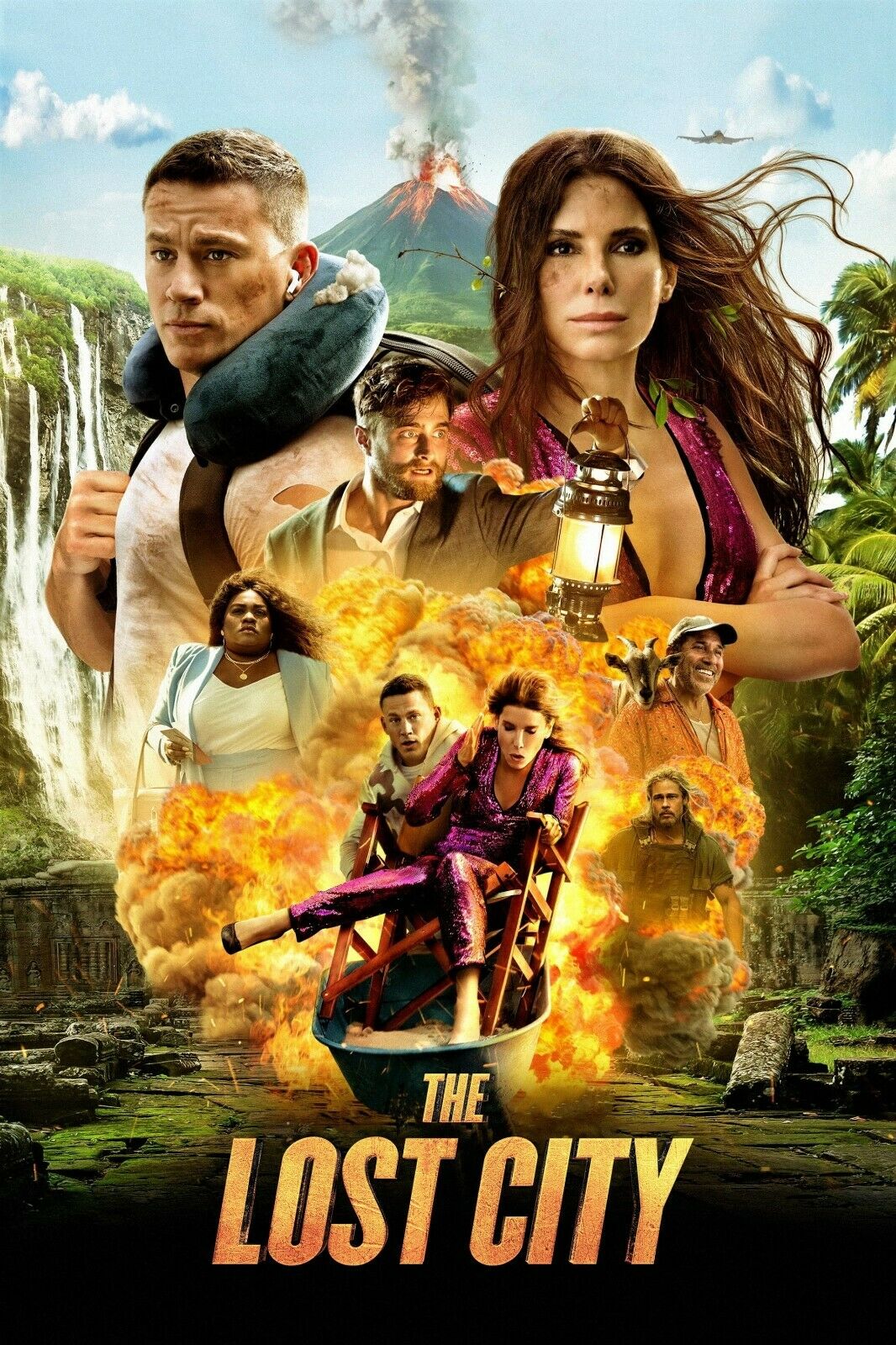 I was wondering when Brad Pitt would show up. Judging from the trailer it would be close to the end when he leaps, long hair blowing wild, to save the day. I didn’t expect him to show up almost right from the start. Nor, I have to say, that before the halfway mark – SPOILER ALERT – his brains would be splattered all over Channing Taum’s face. For me, in that one scene, the film never recovered, despite a bizarre post-credit sequence where it transpired that Pitt had in fact survived having his brains blown out all over Tatum’s face.

But let’s recap. Grieving widow romantic novelist Loretta (Sandra Bullock) whose fans prefer muscular cover model Alan Chaning Tatum) is kidnapped by over-the-top nutjob Abigail (yep!) Fairfax (Daniel Ratcliffe) to recover lost treasure from an island in the middle of nowhere. Alan, assuming that he must act like her fictional hero Dash, enlists Jack Trainer (Brad Pitt) to rescue her. Pitt, having lost none of the athleticism he displayed in Troy (2004), does just that but in the course of the escape – SPOILER ALERT AGAIN – he gets his brains splattered out.

Neither Loretta and Alan are really cut out for escapist adventure and spend most of the time making a hash of it, which is a nice twist on the genre. There’s not really enough chemistry between Bullock and Tatum, both playing personas we’ve seen before. There’s some cute stuff, snuggling up in a hammock, Alan discovering some survival skills and eventually she stops her endless whining and springs into proper heroine mode and the climax includes a romantic surprise when she finally decodes the meaning of the archaeological mystery. But the idea of him being allergic to water seems extreme and it makes even less sense – except as an excuse to show his bum and make a lame joke about the size of his manhood – for him to be only one covered in leeches.

But we hardly need a volcano simmering in the background especially as those special effects are poor. The idea of a deadline for this lackadaisical pair is a joke and reeks of writers struggling for a third act. Without the impending explosion Pitt could just have suffered a broken leg and been left behind; if he miraculously appeared for the coda in crutches that would have been perfectly acceptable, his superhuman skills already demonstrated. And there’s only so much humor you can stretch out of stretching a flimsy dress. And especially idiotic is that they require pushy agent Beth (Da’Vine Joy Randolph) to come to the rescue – the ending is singularly poorly worked-out unlike Uncharted where it all made logical sense. The problem is that everyone in his picture is just dumb without enough of the dumb and dumber-ness to make it an effective comedy.

The surprising part is that with all these misfiring elements and setting aside the brain-splatter the movie works well enough. There’s none of the personality clash – both irritate the other rather than hate them – that marked out Romancing the Stone (1984) and there’s not really enough derring-do but generally it jigs along and both Tatum and Bullock have strong enough fan bases. There’s a determinedly feel-good factor at play.

In particular it’s a welcome return to the big screen for Sandra Bullock (The Heat, 2013) who has somewhat ill-advisedly become the Netflix Queen. A movie star for nearly 30 years she has been very adept at choosing roles and switching her screen persona and her brand of awkward/prickly geek still works. Channing Tatum (Dog, 2022) always plays against his physique, strong but vulnerable and here he adds caring to the formula. Daniel Ratcliffe (Escape from Pretoria, 2020) doesn’t do much more than rant and look manic – Harry Potter in a hissy fit.

Could easily be renamed Search for a Lost Genre as the rom-com struggles to provide partnerships to match Richard Gere-Julia Roberts and Tom Hanks-Meg Ryan and no one has come close to repeating the legendary Tracy-Hepburn dynamic. And while we’re at it, I’m not sure by what authority Loretta concludes that (beyond a swipe at Indiana Jones) snakes have no logical place in ancient tombs.

Despite my nitpicking, they do make a good team and it’s enjoyable enough.