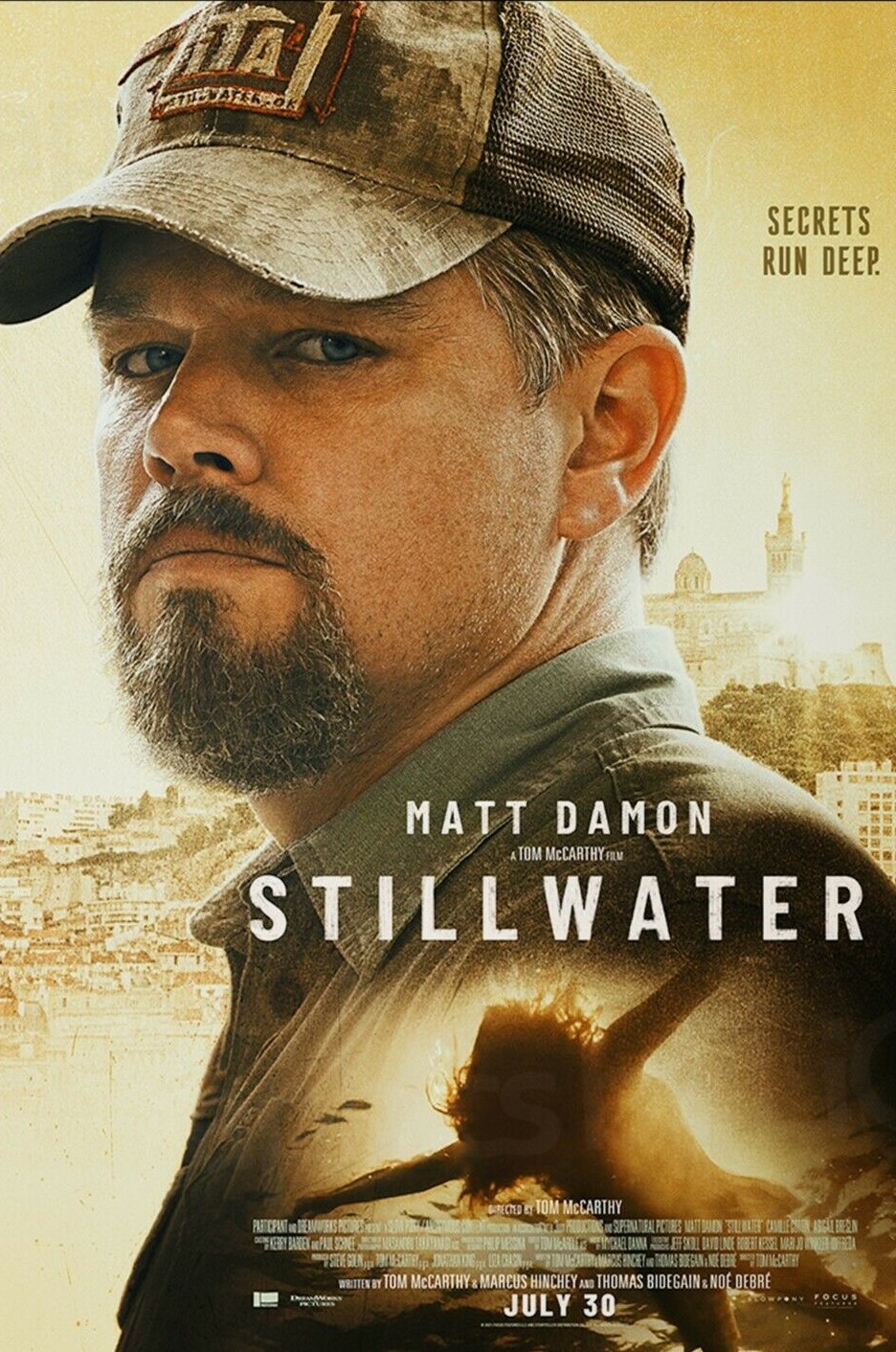 A towering central performance from Matt Damon as a redneck American adrift in Marseilles just about saves this from being a total train wreck. Oscar-nominated director Tom McCarthy (Spotlight, 2015) doesn’t just go off-kilter but dangerously off-piste in a truly bizarre third act that sabotages the entire picture, which already is within touching distance of the jump-the-shark record.

But let’s concentrate on the good stuff. Bill Baker (Matt Damon) is an oil rig worker in Marseilles trying to clear gay daughter Allison (Abigail Breslin) from a murder charge – she has served four years of a ten-year sentence. Normally, he only remains in France for two weeks but this time, frustrated by the French judicial system, attempts his own investigation. He strikes up a relationship with single mother Virginie (Camille Cottin), becoming very attached to her daughter Maya (Lilou Siauvaud).

He becomes a surrogate father to Maya, collecting her after school, taking on babysitting duties to allow Virginie to continue her acting career. He moves in, initially in platonic fashion, but soon they become lovers. Considering he has been a lousy dad to Allison, who still, for good reason, distrusts him, he makes up for it with Maya and soon Virginie, sensing the decent qualities beneath the typical angry American, takes him into her bed.

These relationships are all terrifically well done and it’s almost Bill’s first stab at parenthood since he was absent for most of Allison’s childhood, either away working on oil rigs or out of his skull on drink or drugs. The character exhibits considerable self-awareness and the gradual transformation from bull in a china shop (not exactly how you would describe tough Marseilles, but still) to father and lover is incredibly well done.

So the film could have gone one of two ways. He could have remained in France, working as a general laborer, contributing to the household, watching Maya grow up, perhaps (God forbid!) actually learning some French, and waiting to be reunited with his daughter once freed – she is allowed one day a month out of prison so their relationship is being strengthened in incremental stages.

Or, the director having succumbed to brain fever, Bill could decide to throw all that away by capturing the suspect he has been hunting, slicing off a hunk of hair for DNA purposes, and keeping the prisoner in his basement until the results of such testing comes through. And in the process discovering that his daughter is in fact guilty. It’s as if Damon had realized he was in the wrong picture and slipped into his Jason Bourne alter ego or had been watching too many Taken films.

It would be entirely in character that he hides this unsavory fact from the French police, only confronting his daughter with it once she is safely back home, but it might have been a different, and more satisfying, picture altogether if he had uncovered this evidence in another, simpler, manner and then had to deal with the consequences.

I am making it sound as if the whole picture comes apart in the final section but in truth it is perilously off the rails from the get-go. McCarthy’s contribution to an outdated sub-genre that includes Missing (1982) and Not Without My Daughter (1991) falls into the unacceptable trap of tapping foreign judicial systems as incompetent at best and corrupt at worst. Bill Baker exhibits the worst characteristics of dumb American colonialism as he charges around Marseilles baffled that none of the inhabitants can speak English. It is a truly awful directorial conceit where the eight-year-old Maya is expected to have a better grasp of English than Bill of French. He surely cannot be so dumb that he can’t say “Je t’aime” instead of letting loose an emotional barrage in English to the poor child.

Then there is the very uncomfortable treatment of the locals. Sure, parts of France are certainly racist, and although Bill Baker is comfortable with racists, since he has worked alongside them and he might well have been a Trump supporter had he been allowed to vote instead of being barred due to his criminal record, director McCarthy feels it is his duty as a brave American director shining a spotlight on the country’s nether regions to highlight this aspect of French culture.

Shooting yourself in the foot was never easier than here. The movie bears strong and quite unnecessary similarities to the Amanda Knox case, especially since Allison’s experience with her gay lover comes so close to the facts of the Knox situation.

And that’s not counting the improbabilities. Guess where Bill spots the suspect Akim (Idir Azougli) he has been chasing all his time? Yep, you’ve guessed it. In a crowd of 60,000 people. At a football match. It could only happen in Hollywood. He only needs a sample of the guy’s DNA, a snippet of hair would do, to prove he was present at the scene of the crime and cast sufficient reasonable doubt on his daughter’s conviction. Instead, having floored the guy in the street to get the few strands of hair required, he then locks him up in his cellar – for a week! – until the results of the DNA test comes through.

But someone tips off the cops. But lo and behold when they arrive there is not only no body in the cellar but no evidence that anyone has ever been there because the quick-thinking but very skinny Virginie has improbably managed to untie him and move him to some other unspecified hidden location.

And so we come to the mysterious title. Stillwater is a nondescript backwater in Oklahoma where Allison lived. But for some reason it’s the type of place where not even with a touch of irony canny manufacturers believe its name attached to a necklace would be an unbelievably attractive purchase in a retail outlet at an airport. And that it was worthy not just of being a mere bauble but of being made of gold, and sufficiently valuable that it would be acceptable as part payment to Akim for carrying out a bad deed.

Tom McCarthy has been incredibly lucky to receive a performance of a lifetime by Matt Damon, so sure-footed that there is not even an inkling of his trademark shy smile. Camille Cottin is also excellent. I’m not sure whether Abigail Breslin is meant to be this unlikeable, in which case blame the director, or whether her whiny behavior is a pointer to her guilt. Either way, she is over the top.

However, this is one of those rare instances where if you swallow your disbelief at the plotting, you will uncover a pure gem of a performance.

I saw this at the cinema as part of my Monday night outing. It’s available on Amazon Prime and not the type of picture where the visuals are so outstanding that I would urge you only to watch it on the big screen.